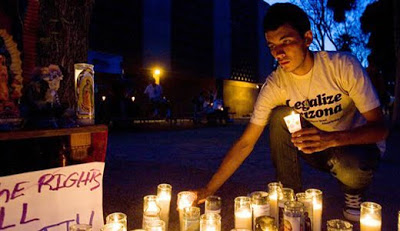 “It is an act of injustice aimed at people whose appearance is suspect. To say there will be no racial profiling is an insult to the integrity of all Arizonans,” — Rev. Carmen B. Guerrero of Phoenix, representing the Episcopal bishop and church of Arizona, April 28 at Tucson gathering of religious leaders.

At the gathering at Southside Presbyterian Church, 317 West 23rd Street, they called for people of faith and conscience to resist enforcement of the legislation.

AZ SB 1070 is a huge bill. Presence in this country without citizenship documents is not prohibited by federal law, although it does subject the undocumented person to deportation. AZ SB 1070 makes such presence a crime.

Besides the racial profiling inherent in asking police to stop and demand papers from anyone who they think may be here “illegally,” everyone by law now has to report on everyone else they suspect, or face criminal prosecution. All police are now immigration agents.

Yesterday, at the press conference held by clergy, the speakers were eloquent. There was not much press coverage, although the Washington Post has a reporter here so maybe they will report. (Their online ongoing immigration discussion is informative.)

This gathering, at Southside Presbyterian Church, was much like movement church meetings back in the day — but sadly, no freedom songs. Oh, well. Mostly Anglo gray hairs, whaddya gonna do?

There’s a second clergy meeting here next Wednesday. We will attend. My husband Paul is an Episcopal priest, and is an organizer for the Industrial Areas Foundation (IAF) — and the Pima County Interfaith Council — and he was a leader in the Sanctuary movement. I’ll tag along. Our buttons read “No papers.” And “Resist SB 1070. Resist racism. Resist fear. Solidarity.”

I also attended a rally at Congressman Raul Grijalva’s campaign office in Tucson last weekend. His other offices are closed following death threats.

There is a strong church based coalition of nonviolent resistance here in Tucson, active for years around border issues: people of color/Anglo/native. (Humano Derechos, Sin Frontera, Samaritans.) This bill criminalizes their humanitarian activities (leaving water in the desert, harboring sick migrants, or welcoming them to churches).

There were many stories at the meeting of home intrusions by INS agents, children being separated from parents on the road into foster care… the human toll. All police departments opposed the bill. No training, no staff, no place to house detainees, nothing.

There is great support across the country for opposition to the bill. Black churches, even Korean churches in Phoenix, are very strong against it. But Arizona polls are 75 percent in favor. Arizona is now the right wing leader, as Mississippi was previously.

This bill is Republican immigration reform. If Obama wants their input, this is it. He should be asking for input from human rights groups instead. This would provide the potential for some radical thinking from the left to emerge, as it has from the right. If he delays immigration reform, he will have to take on every state one at a time.

Make it clear we would like for Obama to to take his attention away from the Republicans for a minute or two, and direct it instead at the opinions of his constituents, us. The great Raul Grijalva, our Congressional representative, is calling on Obama not to cooperate with this bill. Arizona will need the feds to take rounded up detainees off their hands. Obama must refuse to take these detainees into federal hands. Attorney General Eric Holder may try to tie this law up in court, but it’s my guess the state will resist.

Everybody knows we are in an unsustainable mode on all fronts: energy, financial industry malfeasance, economy, military overextension, immigration, jobs. Because we all know this, right and left alike, the time is right for radical ideas, large and deep-seated ideas which will address the depth of the situation we are facing.

Not to knock the great unified movement of which I was a part in the 60’s, but we made some bad moves which led to our fracturing. One result was that the right took the churches. Immigration provides a way into deep conversation — which should include religious leaders — about the kind of country we want.

AZ SB 1070 is the most obvious example of Fortress America, the right wing’s answer to the real issues we all face: “We’ve got it and we are keeping it and we’ll shoot you if you try to get any of it.”

If that’s not you, please come forward around this bill. Boycott Arizona. And get on Obama’s case. Enough buddying up to the Republicans and Wall Street. Immigration reform now. Rule by the Constitution, not states’ rights.