Chafed Texan in the Naked City : Too Many Boobs! 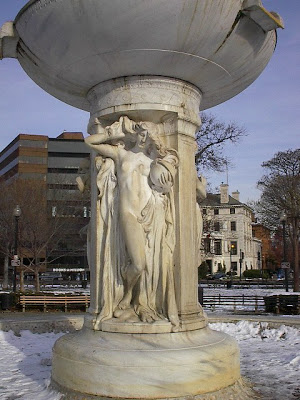 Washington is a town filled with boobs.

They’re everywhere, from the bare-breasted ladies who decorate the fountain at Dupont Circle to the peekaboo statue in the Justice Department’s Great Hall to the countless nudes in our museums. But while those of us who live here hardly blink at the public nudity, it can shock some of our visitors. Such was the case for Robert Hurt, who last week tried to add the issue of artistic indecency in the nation’s capital to the platform of the Texas GOP.

“You don’t have nude art on your front porch,” the Dallas Morning News quoted the delegate as telling the platform committee at the state party convention. “So why is it important to have that in the common places of Washington, D.C.?”

Hurt, 54, a Kerrville, Tex., rancher and father of 14, told us in a phone interview he first came to Washington a decade ago for a gathering of the evangelical Promise Keepers on the Mall. “It was probably not much different than ‘The Beverly Hillbillies’ going to Beverly Hills,” he joked. At the National Gallery, he was appalled to see statues of unclothed people. “I found it very inappropriate,” he said. Returning a few years later, he discovered Arlington Memorial Bridge, flanked by the bare-chested figures of Valor and Sacrifice.

“The Lady Godiva thing — that’s what it conjured up, and that’s not what our country’s about,” he said.

Hurt notified his elected officials of his concerns but believes nothing was done. While he said he respects free speech, “I believe art affects a country indirectly. I have been studying the decline of morals in this country. It’s sending the wrong message to children that nudity is fine, that nakedness is fine. . . . There are degrees of vulgarity, and it opens up the door for the other stuff.”

The platform committee did not adopt Hurt’s recommendation on Washington nudity (nor his proposal to extend the 22nd Amendment — presidential term limits — to spouses). But Hurt said he’ll pursue the issue, possibly with another trip here to videotape the evidence. “I’m not going to stop until I succeed. I’m prepared for a long fight.”

Thanks to Carol Petrucci / The Rag Blog

2 Responses to Chafed Texan in the Naked City : Too Many Boobs!