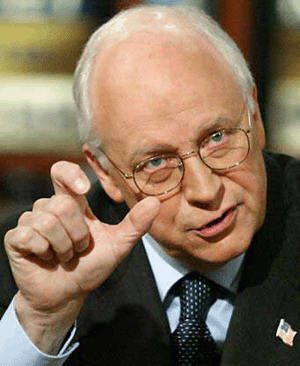 ‘Cheney wrapped up his version of “Through the Iraqi Looking Glass,” double-speaking his way through torture, detention, Guantanamo, wiretapping without warrant, and the administration’s basic trampling of the Constitution.’

Appearing on CBS’s “Face the Nation,” this morning, Vice-President, Dick Cheney, with as straight a face as he is capable of displaying, declared, “I think we’re very close to achieving what it is we set out to do five years ago when we first went into Iraq.” Then, after essentially declaring “Mission Accomplished,” Cheney turned and winked smugly at his invisible sidekick, Harvey Haliburton.

His delusional ramble was nothing new to veteran TV journalist, Bob Schieffer, host of “Face the Nation,” who has interviewed Cheney dozens of times. “How do you think we got it so wrong?” Schieffer asked. “I mean, we thought he had weapons of mass destruction and he didn’t; we thought we would be greeted with open arms and we weren’t. What happened?” Not missing a beat for reflection, Cheney replied, “Well, I don’t look at it as we got it so wrong, Bob.” “We got a big part of it wrong,” Schieffer continued. “There weren’t any weapons of mass destruction.” “Correct.” Cheney replied, “The original intelligence was wrong, no question about it. But there were parts of it that were right. It wasn’t 100 percent wrong.”

It looks like Cheney will ride off into some Wyoming sunset, actually believing his own cherry-picked version of the actual facts which are on the record. New York Times columnist and respected author, Frank Rich, in his book, “The Greatest Story Ever Sold” offers a detailed, 80 page time line of the whole evolution of the Iraq invasion. It starts with the September 15, 2001 Camp David meeting where Deputy Secretary of Defense, Paul Wolfowitz, speaking to his boss, Donald Rumsfeld, advocates attacking Iraq, noting the scarcity of “good targets in Afghanistan.” The whole intricately detailed and documented time line is available online in PDF format at http://www.frankrich.com and someone should read it to Cheney nightly for the rest of his unnatural life. The truth is not going to go away.

Cheney wrapped up his version of “Through the Iraqi Looking Glass,” double-speaking his way through torture, detention, Guantanamo, wiretapping without warrant, and the administration’s basic trampling of the Constitution. Meanwhile, the international press was quoting former interim Iraqi Prime Minister Iyad Allawi, basically selected and approved by Mr. Cheney, as saying “His insistence on names like ‘democracy’ and ‘open elections’, without giving attention to political stability, was a big mistake. It cast shadows on Iraq, Iran, Afghanistan and Egypt and I believe this will be remembered in history as President Bush’s policy.”

History will remember both Bush and his mad mentor, Cheney, perhaps in the context of the observation of William Shakespeare, “The very substance of the ambitious is merely the shadow of a dream.”