Co-Housing: Another Way Toward Sustainability 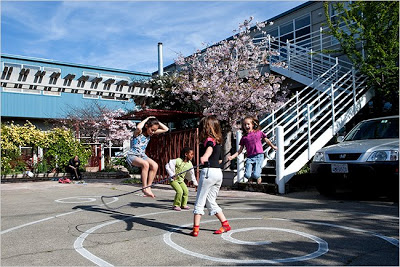 Children playing in a communal yard at Doyle Street in Emeryville. Photo: Drew Kelly/New York Times.
To Your Left, a Better Way of Life?
By Chris Colin / June 10, 2009

VICKI SETZER and her cats inhabit a small ranch home on a quiet cul-de-sac in Visalia, Calif. Connie Baechler leases a split-level house in Smyrna, Ga., with her fiancé. Perfectly typical nesting arrangements, and yet something profound seemed to be missing.

So on a Saturday morning in the East Bay area of California, they and about 17 others boarded a rumbling white tour bus to try to find a mode of living better suited to the times.

The tour was one of several this season in different parts of the country designed to give participants an up-close look at various co-housing communities, and to address an increasingly common feeling that one pays too much for one’s home, sees friends too little there and generally lives a more isolated life than is desirable. These are not new complaints, but the recession has sharpened them, as it has thrown all large expenditures under deeper scrutiny.

Remedial questions are permitted on these tours, like, “What is co-housing?”

The Cohousing Association of the United States has been answering that question quite frequently as more people sign up for its tours: The communities consist of individual houses whose residents share some common space, a few communal dinners a week and a commitment to green living.

The movement has been gaining momentum here since it first arrived from Denmark two decades ago. But passengers on the bus tours describe the general climate of uncertainty as setting off more urgent waves of reappraisal: Is this how I want to raise my family? Spend my remaining years? Is there a better option — a more stable community?

Judy Pope, a consultant in Oakland, Calif., who joined the East Bay tour, described a practical interest in co-housing.

“I had a pretty robust portfolio of investments that I was going to retire on,” Ms. Pope said. “Now I’m feeling the financial pressure to live with people. I can’t continue to live in my big old house.”

In some cases, the closeness of these communities offers bulwarks against a lousy economy. Residents speak of lending money to one another when necessary or, say, pitching in to build a wheelchair ramp when insurance might not cover it. Then there is the savings associated with a more efficiently designed home, and shared upkeep costs. But strictly speaking, a home in a co-housing community doesn’t necessarily cost less than a traditional home. As advocates describe it, the benefits are of the added-value variety.

“You just get more bang for your buck,” said Laura Fitch, a 15-year co-houser who led a recent tour in Massachusetts. “You can have entertainment next door rather than going to the movies, and if you’re a parent, you don’t have to drive to all those play dates, or even buy as many toys because your kids are more entertained.”

She added that the price of co-housing often included a common house with guest rooms, a party space, a children’s play area and the security of people watching out for one another.

Jason Reichert, who works at a shipyard in Maine and joined a New England tour, said he liked the idea of weathering the country’s economic and environmental crises with a group.

“My grandparents’ community got through the Depression by being very close-knit,” Mr. Reichert said, “with one family knowing how to farm, for example, and another knowing how to raise poultry. We’ve lost that. But co-housing is accomplishing something similar.”

Craig Ragland, the executive director of the Cohousing Association, said: “Some people are looking at these communities as a lifeboat. The thinking is, if I’m surrounded by people who care about me, I’m less likely to crash and burn.”

More than 115 rural, urban and suburban co-housing communities exist across the country, consisting of 2,675 units, according to the association. There are 3 to 67 homes in each, on tiny city lots and 550-acre parcels. Some are “retrofit” communities, in which existing side-by-side homes are purchased and then converted. Others start with a piece of land and build units from scratch. In both, residents own their homes outright, but agree to participate in the communal arrangement.

The Cohousing Association has sponsored these tours for about a decade. For $105, participants get a box lunch, an enthusiastic guide or two and an eight-hour tour of various communities.

The recent East Bay trip was led by Jennifer West and Neil Planchon, both residents of local co-housing communities. The people who convened that Saturday lived alone or with families, ranged from 30-something to 60-something and came from Colorado and Vancouver, Georgia and California. 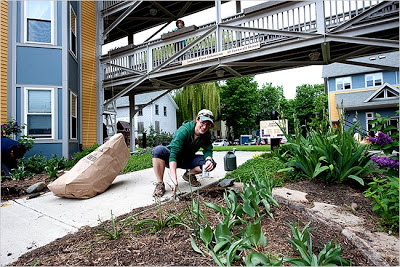 As rolling adventures go, the trip had the esprit de corps of Ken Kesey’s psychedelic bus and the hands-in-laps manners of a sightseeing tour. Between stops, passengers talked about how they ended up on this atypical excursion.

Ms. Baechler from Georgia presented a familiar gripe. “I like my neighbors back home, but we don’t really have a community that gets together and talks,” she said. “So I end up driving 20 miles to have dinner with a friend after work.”

She added: “I guess there’s always Facebook, but I want to be sitting next to a three-dimensional person. With co-housing, we’d be able to converge just yards from where we live.”

Paul Hadley, 35, is a freelance French-horn player and stay-at-home dad in Santa Rosa, Calif. He and his wife, Judy, a chemical engineer, live with their 2-year-old in a three-bedroom house on a country road that has become a busy thoroughfare. Co-housing, Mr. Hadley said, seemed to offer a return to village life, without all the cars. He and his wife were seeking “a richer life of relationships, not stuff,” he said.

The bus steamed along, periodically disgorging passengers to stumble through people’s happy homes. Parents on the tour watched as children ran from unit to unit, no supervision required. Devotees of sustainability listened to tales of shared resources and reduced footprints. Those keen on intergenerational living saw residents of all ages mingling casually. For the design conscious, there was an intelligent flow that encouraged serendipitous meetings while still preserving privacy.

“For a long time we’d always be referred to as ‘communes for the ’90s’ or ‘the new commune,’ ” said Mr. Ragland of the Cohousing Association. “But increasingly people are seeing that it’s really just a new type of neighborhood.”

Karen Hester, who lives in the Temescal Creek community, the fifth stop of the day, answered questions about daily life in co-housing. “It’s not about utopia,” she said. “It’s fundamentally a pragmatic thing. When my computer crashes, my neighbor is over in five minutes to fix it. In turn, maybe his kids come home from school sick and I’m there to take care of them.”

The tour put the group in a kind of envy daze. At Temescal Commons, originally formed by members of a nearby Methodist church, photovoltaic roof panels let the residents sell power back to the utility company. At Pleasant Hill, children sold lemonade in a bright patch of shared grass.

But Ms. West and Mr. Planchon were clear that co-housing presented challenges, too. Ms. West recounted a heated episode at her community where someone didn’t receive a party invitation. They also spoke of meeting fatigue, a byproduct of reaching decisions via consensus model, and the surprisingly volatile matter of pets.

Do the tours win people over? Some, like Ms. Baechler, came away with reservations — she thought she might hold out for a community focused on the arts. But mostly the groups leave ecstatic, fingers nearly on checkbooks.

Delina Malo-Juvera, 36, lives in a 19th-century farmhouse in rural Maine. After the Massachusetts tour, she said she hoped to one day start a co-housing group of her own. “The economy and the state of the world — you don’t know what’s going to happen, so it’d be great to have that secure, self-sustaining community,” she said. “I loved it.”

For her part, Ms. Setzer, the cul-de-sac dweller from Visalia, said that the idea of joining a multigenerational community might be the most appealing aspect — and that she didn’t mind how few people were aware of the existence of this vaguely Norman Rockwellian lifestyle.

“I told my son about co-housing, and he thought I was a Martian,” Ms. Setzer said. “Then again, he often thinks that.”

This entry was posted in RagBlog and tagged Community Organizing, Housing, Sustainability. Bookmark the permalink.

1 Response to Co-Housing: Another Way Toward Sustainability