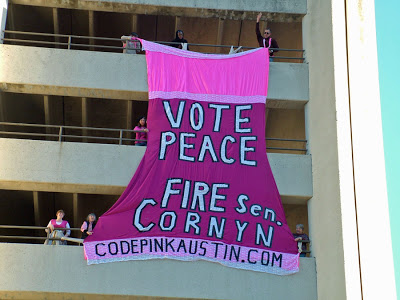 Photo by Deborah Vanko / The Rag Blog
‘Rather than giving the Senator another term to “move to the center,” we think he should keep following the Bush administration right out the door.‘
By Susan Van Haitsma / The Rag Blog / October 27, 2008

Say, was that a giant pink slip displayed across the street from US Senator John Cornyn’s office on Friday morning? I believe it was!

At about the same time the pink slip was flying downtown, the Austin American Statesman was running a Cornyn ad on its home page.

Strangely, the AAS editorial board endorses the senator, even while admitting that he has been “little more than an agent of the Bush administration.”

Rather than giving the Senator another term to “move to the center,” we think he should keep following the Bush administration right out the door.

The CodePink delivery service reported that the message was well received among morning commuters, even though parking garage security were soon on the case, ordering the slip team to roll it up and threatening to “cut it down with a knife.” Notta lotta drama in the parking garage most of the time, I’m guessin.

After being kicked out, the pink slippers decided to walk the banner to another garage and unfurl it again. All together, the pink slip flew for about an hour.

I wonder how much the Cornyn campaign pays to run a Statesman ad. The parking garage cost $4 — and a little strategery.