Some Straight Talk on Socialism and Bullshit 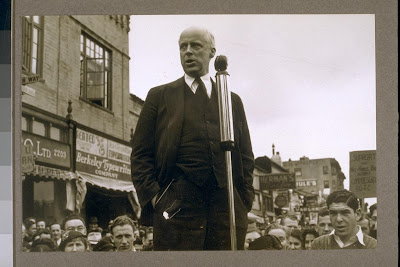 The late great American socialist Norman Thomas. Photo courtesy of The Bancroft Library / University of California, Berkeley.
‘The Republican vocabulary has always involved mindless terminology, word choices that cause apprehension and fear in the uninformed, such as “socialism.”’
By Dr. S. R. Keister / The Rag Blog / October 27, 2008

In listening to the McCain/Palin campaigns, within tolerance, I recall a most wonderful pocket sized book by Harry G. Frankfurt, professor of Philosophy at Princeton University. The title is aptly “On Bullshit”. The absurd dialectic of our Republic and friends regarding “Socialism” and “Spreading The Wealth” certainly requires further analysis of the terminology suggested by Dr. Frankfurt. For those of us who consider the term “bullshit” impolite one might consider a synonym such as humbug, balderdash, claptrap, hokum, drivel, buncombe, or quackery.

The Republican vocabulary has always involved mindless terminology, word choices that cause apprehension and fear in the uninformed, such as “death tax,” “partial birth abortion,” “terrorist,” “socialism.” The propagandist creates non-events, or non-persons, to control the thinking of the unsophisticated , undereducated, or the undeniably bigoted. “Mind control” or “brainwashing” might be the appropriate terms.

But to the subject of “socialism.” I was first introduced to a ”socialist” at the tender age of 11. My father, a Harvard Law School graduate, Unitarian, small town attorney, an admirer of Eugene Debs and Clarence Darrow, was in 1932 running for congress on the Socialist ticket. He of course did not win. Norman Thomas, perennial candidate for President on the Socialist ticket throughout the 20s and 30s was the guest speaker at a rally. Thomas was a soft spoken man, a Presbyterian minister, who believed that wealth should not be concentrated in the hands of a few, but should be distributed among those who were willing to work for same.

He was a pacifist who had opposed U.S. involvement in the first World War. He believed in cooperative endeavor such as was illustrated at one time by the Amana settlements in the American mid-west or the Israeli kibbutz. My memories of Mr. Thomas now are vague but I recall he was kindly, admired my mother’s rock-garden, and at the rally dumbfounded the audience by paraphrasing the Bible, i.e. “The world is the LANDLORDS and the fullness therein.”

One problem one faced throughout near all of the 20th century was ”Russian socialism.” Of course there was no such thing. Karl Marks, a political philosopher, in das Capital never promulgated a regime such as that in the Soviet Union. “Communist Russia” was the creation of Lenin and Trotsky. Trotsky believed in a republic where the worker was represented in all affairs of state. Trotsky was assassinated as an exile in Mexico for his thinking. Instead Lenin, and later Stalin, created an autocracy, the antithesis of true socialism, with a dictator dominating the working class and reducing them to near medieval vassalage.

The term “National Socialist” appeared in Germany in 1932. Again this was a complete misnomer as the Nazis were Fascists. Fascism had no use for the worker, as it was a union of an autocratic, right wing regimen, with big business and the military. Sounds vaguely familiar?

Mr. McCain, and his vice-presidential candidate, a follower of The New Apostolic Reformation want the ill informed public to be confused regarding the meaning of socialism. As with all propaganda they endeavor to turn something functional into something evil. Where can we find “socialism” in the world today. The best current functional examples are in the Scandinavian nations, i.e. Denmark, Norway, Sweden. In general, though there are some variations from country to country, these folks have a good standard of living throughout the population. These are elected parliamentary governments. They have private enterprise, with mutually agreeable unionization between the employers and the employees.

The average person has a very nice, but not elaborate, house or apartment, a decent automobile, and first class public transportation. Taxes are a shade higher than the combined taxes of the American taxpayer (income tax, social security tax, sales taxes, transfer taxes, etc) but they receive first class free medical care, and free education through college and university when qualified, as well as first class unemployment and retirement benefits. The worker, as well as the executive, receives decent vacation time. They are not burdened with health insurance premiums, either as employer or individual, with the profits going to the CEOs and insurance company stockholders as in the United States.

The current Spanish government, though the titular ruler is the King, Juan Carlos, is run by a socialist prime minister and interestingly with the financial control of the Spanish banks the current USA/ European banking crises has not involved the Spanish banking system, thanks to its government oversight, to the extent we are experiencing in the United States. The Spanish Democracy has come far in the past half century from the Fascist regime of Francisco Franco with its militaristic, two class society. The Socialist government of Francois Mitterand made great progress in the French Republic after the De Gaulle years.

A few final thoughts regarding Norman Thomas. When FDR was elected President in 1932 he incorporated many of Thomas’s thoughts into The New Deal, such as Social Security (which McCain would privatize), public works programs, which Obama espouses at present, a modicum of control on the banks and stock exchange (done away with by the current neo-liberal economic thinkers starting with President Reagan), educational subsidies, and the idea of giving the working man the fruits of his labor (wealth redistribution) rather than 98% of the countries wealth going to three per cent of the population. Did the Lord create the USA just for three per cent of its citizens?

I realize that the readers of The Rag Blog are the better educated, more public spirited folks hereabouts, but in someway in the next week we must get the truth out to the general public. The real bigots, the true believers, will not be swayed; however, with luck, we will force a few folks to face the truth. The truth about socialism and no more bullshit.

[S. R. Keister, a retired physician, is a regular contributor to The Rag Blog.}

3 Responses to Some Straight Talk on Socialism and Bullshit