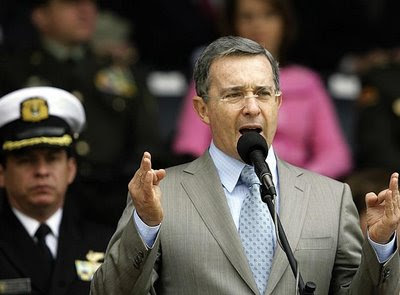 Presidents Chavez and Evo Morales of Bolivia have been especially outspoken in their criticism of President Uribe’s decision to allow U.S. bases in Colombia, and at least once he’s been called a ‘traitor to Latin America.’

BOGOTA — Last Monday was Colombian Independence Day and there were parades and other celebrations throughout the country. President Álvaro Uribe read a long speech in a monotone on TV in the middle of the afternoon. (Doesn’t he have access to, at least, a teleprompter? You could see the papers in his hand and he very seldom even looked up, much less changed the tone of his voice.)

One of the main topics was defending the government’s decision to open three Colombian military bases to US military presence, which he insists is only intended to provide more assistance with the war on drugs. But since two of the bases, (one an air base and one a naval base, I think) are very near the Venezuelan border, President Hugo Chavez is complaining of feeling menaced, and threatening to cut off trade with Colombia. The third base is near the Ecuadoran border, not too far from the U.S. base at Palmerola being closed by Ecuadoran President Correa.

Both countries are part of the Latin American leftist/anti U.S. bloc that includes Bolivia and Cuba, and depending on the issue, Brazil, Chile, Guatemala, Nicaragua, and now El Salvador among others. One of the accusations lodged against President Zelaya of Honduras, deposed last month in a military coup that still has not been resolved, is that he was bringing Honduras into this bloc, too.

Presidents Chavez and Evo Morales of Bolivia have been especially outspoken in their criticism of President Uribe’s decision to allow U.S. bases in Colombia, and at least once he’s been called a “traitor to Latin America.” While some others have not gone so far, it is a problematic policy that he has undertaken.

Within Colombia, several legislators are questioning whether this will impinge on Colombia’s sovereignty, and are criticizing other aspects of the agreement, although there’s little concern expressed about how the U.S. presence is likely to increase aspects of the civil war which damaged civilians, such as attacks by both guerrilla and paramilitary groups, violations of human rights, and the general decay of communities near military bases.

Other news while I have been here has included a video purporting to be a guerrilla comandante bragging about the FARC’s financial support of the electoral campaign of President Correas, and the ties they have with his government. The timing of the release of this news is suspect — it is claimed to have been found on the computer discovered at a guerrilla site just over the border in Ecuador, that was captured last year, after a battle in which several high level commanders were killed.

For months, information from the computer dominated the news, accusing Venezuela and Cuba of material support of the FARC and other governments, including Costa Rica and Nicaragua, were charged with other ties. It does seem curious that only now, many months later, and at the same time as the deal with the US military was announced, the film and accusations have been released. Some of my friends are frankly incredulous; others, noting the timing, are not very concerned about the alleged connections of the Ecuadoran government with the guerrillas.

It seems to me, that in the large cities, at least, the FARC has lost the propaganda war. There’s always a lot of news about kidnapped people being held by the guerrillas. Last week a mother staged a walkathon across a Colombian state to plead for the liberation of her son, a police or army officer, who was captured years ago. There are still sporadic marches with thousands of citizens protesting the continued captivity of hundreds of people held by various units of the FARC.

A congresswoman’s frequent efforts at negotiating the release of captives is covered in great detail, despite the fact that because of her negotiations, she’s portrayed as a guerrilla sympathizer. The occasional attacks on military, police or civilians that can be blamed on the FARC or the other guerrilla group, the ERN, receive days of coverage, including the funerals of victims.

How doe this affect our work? In Monteria, one of the sites where we have an active group of AVP facilitators, corpses appear daily with sign of torture and messages warning of the fate that waits people who try to leave the paramilitary and drug gangs. My colleagues told me that while there were people in a small community that had suffered severe and brutal violence, and that it would be good to visit and offer AVP workshops, but the victims themselves did not think that outsiders, not to mention foreigners, would be safe there. They would risk kidnapping by a gang which would sell the captives to a guerrilla group.

So, although the community is hungry for AVP and especially the trauma healing workshop, they will have to figure out a way to come to a safer site in a larger city.

Since the media is more or less controlled by the government or by the groups that support right wing paramilitaries, few stories emerge that reveal the violence on the other side, although more has come out about the crimes of paramilitary groups in the last few years — a few leaders have even been prosecuted. The polarization is such that almost anyone who criticizes the government, the war, human rights violations and so forth, is likely to be called a “terrorist” whether or not the person involved promotes or uses violent tactics. But many groups rely on nonviolence and launch protests, sit-ins, marches, and so forth in the capital and in other towns.

I especially admire the young conscientious objectors groups, which, in at least 12 cities around the country, promote (and defend) not only conscientious objection to obligatory military service, but also a nonviolent commitment that will keep young people out of gangs, paramilitary groups, and criminal/narcotrafficking groups. Their analysis of the roots of violence in their country go beyond the actions of these groups, and include defending the environment, opposing the programs of “development” fomented by the government and multinational companies, and defending and educating young people about human and civil rights.