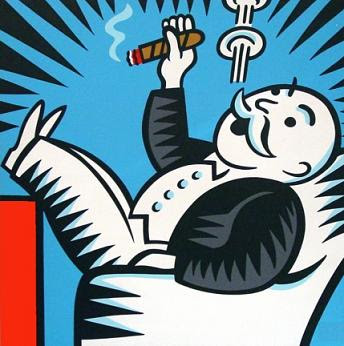 In a Friday morning appearance on Squawk Box at the Capitalism Knows Best Channel (CNBC) Warren Buffett promoted two things: a new cartoon where he plays himself as investor super hero — and equities.

“I would much rather own equities at 9000 on the DOW than have a long investment in govt bonds or a continuously rolling investment in short term money. Now, again I don’t know where it’s going to go next week or next month,” said Buffett in a quote archived at Huffington Post.

“But you still think equities is the place to be?” asked Becky Quick.

“I own them myself,” chuckled Buffett, putting mouth where money is at.

For my part — ignoring for the moment how “media savvy” the Oracle from Omaha can be — I have been paying attention to Buffett because I think what he says can be helpful in trying to understand a way upward in the direction of job growth. Also, with my brief experience in market trading, I think he does have the more sustainable long-term view of market investment. If the market crashes next week, he will still have plenty to work with.

Although I have NO IDEA what people should do with their savings this month, I do think that whenever more people decide to truly invest in equities there will be a greater chance of a recovery based on jobs. The term “jobless recovery” to me has all the charm of fingernails scraping a blackboard. Anyone who speaks seriously about a jobless recovery is only declaring that he belongs to the class which has no Real Jobs to lose.

For the rest of us, the combination of depression and joblessness cannot suggest images of anything resembling recovery. Already the image of Skip Gates in handcuffs warns us how suddenly ugly things can get.

So I am looking for a way to think about the requirements of a recovery “with jobs” and I am following the guidance of San Francisco economist Henry George who argues that workers will create value on the spot so long as they are provided proper tools. From this cue I go looking through Google News for signs of capital expenditures and investments. What’s up with tool development these days?

Notice that I did not begin my search for recovery with “consumer spending,” because I think that the mainstream chatter about this is another way of capitulating to depression. In other words, please tell me why consumers are going to increase spending while they are losing jobs? A labor-centered discussion of recovery would change the language of “jobless recovery” into “capital stagnation” so that we may more forthrightly name the thing that needs to be directly confronted.

The run-up in technology-sector equities these past few months gives us something to work with. This is a prime tooling sector for advancing development along broad dimensions of opportunity. Jim Cramer makes a compelling case that the tech sector is also more free to refresh itself compared to other sectors plundered by pirates of finance. Yet the tech sector is beginning to quiver and quake upon rocking foundations.

The first item I find when looking for “capital investment” is a press release from the National Venture Capital Association announcing that the Biotech sector has attracted a 67 percent increase “in Seed and Early Stage fundings” during Q2. Clean Technology is the next fastest growing venture sector, followed by Software and Medical Devices. Although the raw numbers look hopeful because of very recent increases, the historical levels of capital at play take us back more than a decade, “close to what we saw in 1997 before the Internet bubble.”

Next item on the Capital expenditure front is a pep talk by Andy Rowsell-Jones at Gartner, Inc., who is telling IT directors not to capitulate to cuts in IT budgets.

“While IT expenditure may be a small proportion — ranging from 1.7 percent in the construction and engineering industry to 12.6 percent in the banking and finance sector — budgets have been cut in light of the economic situation. Rowsell-Jones said IT spending has risen every year from 2003, but is being cut for this year, according to a recent Gartner survey.” The banking sector is not even upgrading its own computers? Hold your expletives, and pass the subpoenas…

The third item is from Stockholm, reviewing the quarterly report from Ericsson Telephone: “Several telecom operators have announced plans to reduce investments in order to maintain cash-flow in the economic downturn, a trend that can hurt companies like Ericsson that supply network equipment.”

From this short sample of findings we may draw a preliminary hypothesis that capitalism is in no great position to deliver the tools that will be needed for a speedier economic recovery. And this is why so long as Capitalism Knows Best we are staring at a chasm that is called the jobless recovery.

What is called for is something we might call pinpoint socialism where public resources are put to use injecting support for tool-making in precise contexts. In the case of IT upgrades and telecom network equipment, the needs are “shovel ready.” They have been planned and budgeted. Suppliers are at hand. Only a vicious cycle of “free market cash implosion” has trickled down. If active and sensible agents of public trust were to get busy in these areas, putting our debt bubble to productive use — instead of taking August recesses — jobs could still be “saved or created” in the near term.

As a preliminary parameter for public injections of funds to make new tools, there could be a simple baseline requirement that qualifying companies must state the need in their SEC filings. If the companies are caught lying about their capital investment needs, theoretically there is an agency that could send in the Cambridge Police.

Along a second line of analysis offered by Henry George, successful experiments are taking place in Pennsylvania and Michigan regarding a different approach to land policy. Wikipedia has a good orientation to Land Value Tax (LVT) that gives brief credit to Henry George. The basic idea is to shift the burden of taxation away from capital (capital gains) and labor (income tax) — both of which we need more of — and place the taxation onto land (which is ever in fixed supply).

According to reports archived at earthrights.net:

“Any non-Genesee County residents may acquire LBA property only with an enforceable plan to place the property into immediate productive use (meaning the property is to be occupied immediately or with the immediate commencement of some form of development project that fits our stated mission). This applies to vacant lots as well as properties with structures, residential and commercial properties.”

The LBA principle of land liberation is right out of “Progress and Poverty” by Henry George, which argues at length that labor and capital will keep each other more productive if all unused land is set free. Need we remind ourselves there will never be a cheaper time in our lives to liberate the land monopolists?

Finally, while we’re at it, may I venture to suggest, that wherever today you find people complaining about “Mexican illegals” — tomorrow — with fresh tools and liberated land — everybody will marvel at the rise of cities of gold.

[Greg Moses is editor of the Texas Civil Rights Review and author of Revolution of Conscience: Martin Luther King, Jr. and the Philosophy of Nonviolence. He can be reached at gmosesx@prodigy.net.]