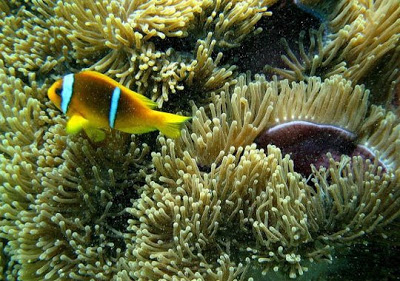 A fish swims among coral reefs off the Obhor coast, north of the Red Sea city of Jeddah. A third of reef-building corals worldwide are threatened with extinction due to climate change and water pollution, according to the first global assessment on the marine creature. Photo by Hassan Ammar / AFP/Getty Images.
Climate Change Threatens World’s Coral Reefs
July 10, 2008

A third of reef-building corals worldwide are threatened with extinction due to climate change and water pollution, according to the first global assessment on the marine creature by 39 scientists.

“The results of this study are very disconcerting,” said Kent Carpenter, lead author of the study which examined 845 coral reef species.

“When corals die off, so do the other plants and animals that depend on coral reefs for food and shelter, and this can lead to the collapse of entire ecosystems,” he added.

Roger McManus from Conservation International said that reef-building corals in particular were “most vulnerable to the effects of climate change”.

Sea temperature rises bleach and weaken the algae that give the underwater sea life its vibrant color, and make it more susceptible to diseases.

As they are home to over 25 percent of marine species — including fish stocks — loss of reefs could also impact coastal fishing communities.

“The loss of the corals will have profound implications for millions of people who depend on coral reefs for their livelihoods,” said McManus.

According to the study, the Caribbean region has the highest number of highly threatened corals.

Due to huge human populations in the region, the Indo-Malay-Philippine archipelago also has the highest proportions of vulnerable and almost threatened species in the Indo-Pacific.

“We either reduce our CO2 emission now or many corals will be lost forever,” warned Julia Marton-Lefevre, IUCN Director General.