Constitutional Conventions: The Power to Reform Government to Eliminate Corruption 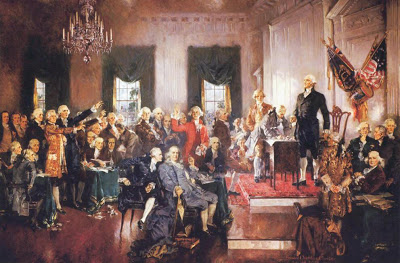 The current Illinois governor, Rod Blagojevich, recently charged with crimes by the federal government, just follows in the footsteps of previous convicted Illinois governors and a huge number of other Illinois officials convicted of crimes. What is remarkable is that in the 2008 election Illinois voters had the opportunity to recognize that they needed to use their constitutional convention opportunity to reform state government. They voted not to use it.

Which raises the question: How stupid or brainwashed are most Illinois citizens?

In November, two-thirds voted against having a convention. Twenty years earlier they also voted against one. But even with twenty more years of public corruption, Illinois citizens could not be convinced to pursue a path to political reform free from the chains of their corrupt state government. The last convention was in 1970.

Back in January 2008 this is what John Bambenek, who wrote a book supporting the convention, had the good sense to say: “Gov. Rod Blagojevich has done something remarkable in Illinois. He has managed to unite people across the political spectrum to create consensus that he absolutely stinks as a governor. Illinois deserves better than Rod Blagojevich. Because of his low approval in both parties and the budget fiasco of last year, legislators (even those in his own party) are talking about amending the constitution to allow recall votes of sitting politicians. The timing for such talk is opportune because on the November ballot this year there will be a question on whether to have a constitutional convention for Illinois to rewrite or amend the state constitution.” Like other pro-convention advocates, Bambenek wanted to return power to Illinois citizens. Most of them did not listen.

A key argument in favor of convention was that the cost of a no-frills convention (around $23 million) would surely be repaid by the savings to taxpayers of constitutional amendments that could get the state out of the lobbyist-run budget crisis it was in. Not to mention the possibility of an amendment that could make it easier to get rid of corrupt governors and other officials by, for example, recall by citizens. How sensible, considering that even before the charges against the current governor three previous Illinois governors had been convicted of crimes.

Otto Kerner (D) governor 1961-1968 was convicted on 17 counts of bribery, conspiracy, perjury, and related charges. He was sentenced to three years in federal prison and fined $50,000. Daniel Walker (D) governor 1973-1977 was convicted of improprieties related to a savings and loan association. He reportedly received over a million dollars in fraudulent loans for his business and repairs on his yacht. He pleaded out to three felonies and was freed after 17 months in prison because he was supposedly frail and chronically ill, but is still living 20 years later and living near the ocean in Mexico. And George Ryan (R) governor 1999-2003 was convicted on 20 federal counts that included racketeering, bribery, and extortion

And consider this amazing statistic: From 1995 to 2004, 469 politicians from the federal district of Northern Illinois were found guilty of corruption.

And then there was the famous case of Rep. Dan Rostenkowski (D) who was indicted in 1994 on 17 felony charges, including the embezzlement of $695,000 in taxpayer and campaign funds. The longtime powerful House ways and means committee chairman plea-bargained his way down to just two counts of mail fraud and served only 17 months in a minimum-security prison.

We must not depend on electing individuals to public office to truly reform the system. We have a corrupt two-party plutocracy. It is time to stop believing the lies of both Democrats and Republicans. We can keep putting many of them in prison, but all that happens is that more corrupt and dishonest politicians get elected. Just as it has happened for the Illinois governorship.

Finally, you might ask whether Illinois Senator Barack Obama supported the 2008 convention proposal. What do you think? Obama’s key advisor, David Axelrod, who crafted his “change” message, shared a multimillion dollar contract provided by opponents to the convention who feared change.