Could Alabama Gov. Siegelman Bring Down the House of Cards? 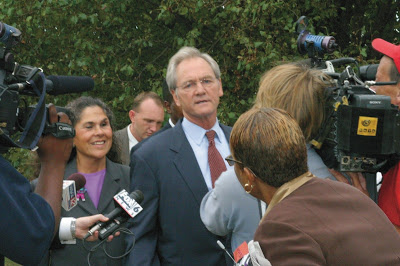 As more and more corruption and law breaking at the highest reaches of our Government reveal themselves, will the scandal surrounding the use of the Department of Justice as an electoral tool be the one that finally holds the Bush administration to account? If so, there is one man who’s story may seal the unraveling of this criminal regime.

Former political prisoner and former Governor of Alabama Don Siegelman will be making a court sanctioned trip out of Alabama to join me at Netroots Nation to discuss his case and what it can tell us about the unprecedented corruption that exists in our nation’s chief law enforcement agency, the Department of Justice.

By now many are familiar with the case of Don Siegelman.. A very popular former Democratic Alabama Governor seen as an electoral threat to unseat Republican Bob Riley. Faced with the most popular Democrat in generations, Congressional testimony reveals that Republican operatives in Alabama and Karl Rove’s dirty tricks shop in the White House used the prosecution powers of the DOJ’s United States Attorneys to send Don Siegelman to jail on trumped up charges.

The dogged reporting by on-line journalists like Talking Points Memo, Larisa Alexandrovna and Scott Horton, Congressional hearings and a sixty minutes interview forced an appellate Court to reexamine the Siegelman case. Within days Siegelman was released from prison pending his appeal and the court found “that his appeal raises substantial questions of law or fact…”. Reagan’s Attorney General Richard Thornburgh and 54 former US Attorneys of all political stripes from across the country smell a rat. Not surprisingly, that rat smells a lot like Karl Rove, the Fox news commentator and former White House dirty trickster.

For over a year and a half now we have known of the US Attorney firings scandal that has forced the resignations of countless DOJ officials. The Siegelman case is the other side of the coin of the corruption of the Department of Justice under the Bush administration. Those US attorney firings took place because those US Attorney’s would not play ball with a DOJ hell bent on using it’s powers to provide Republicans an advantage at the ballot box. Some refer to this scandal as the politicization of the Department of Justice, but the Siegelman case and other such prosecutions over the past six years go well beyond a mere infraction of the Hatch act. These cases are indicative of an agenda that has literally torn at the fabric of a nation built upon the rule of law and justice for all. This is a corruption of the very foundations of how the United States of America is supposed function as a democracy. When the chief law enforcement agency has become crooked, who do you call?

Fox commentator Karl Rove, through his attorney, has claimed that simply because he once worked at the White House he need not comply with a Congressional subpoena to testify as to his involvement with this prosecution. Karl Rove may not be traveling to Washington anytime soon, but Don Siegelman will be traveling to Austin Friday at Netroots Nation to give us some insight as to just how far we have fallen as a a nation.

If you have any questions you’d like me to ask of the former Governor, feel free to head over here and offer them up.

[Catch it live. This conversation with Sam Seder and Gov. Siegelman will be streaming live exclusively at AirAmerica on Friday, July 18th 10:30 AM – 11:45 AM.]

1 Response to Could Alabama Gov. Siegelman Bring Down the House of Cards?