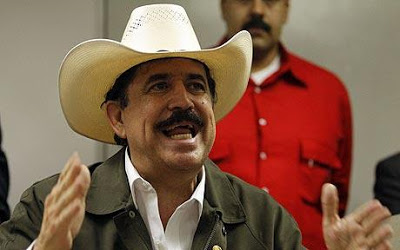 After two days of closed meetings in Costa Rica, representatives of deposed Honduran president Manuel Zelaya and de facto president Roberto Micheletti appear not to have reached any substantive agreement.

Acting as mediator, Costa Rican President Óscar Arias met with the two groups at his residence in San José last Thursday and Friday, July 9 and 10, after meeting separately with each of the two claimants to the presidency. Zelaya has asked that the next meeting be in Honduras, but Arias disagrees and so far no further meetings have been scheduled.

Since Zelaya’s term expires next January, a long delay in his reinstatement could make questions of the legality of the de facto government moot.

Arias had accepted the position of mediator at the urging of U.S. Secretary of State Hillary Clinton. Zelaya and Micheletti, neither of whom has expressed any willingness to compromise, agreed to send representatives but declined to attend the sessions themselves. After meeting with Arias, Micheletti returned to Honduras and Zelaya left for the Dominican Republic and later flew toWashington.

The meetings in San José and Arias’ part in them have been criticized by leaders of anti-coup forces in Honduras and by Venezuelan President Hugo Chávez, who see them as legitimizing Micheletti’s de facto presidency. Carlos Reyes, director of the Frente Nacional de Resistencia contra el Golpe de Estado, a coalition of Honduran groups opposing the coup, has reportedly called the arranged meetings a delaying tactic meant to give more room to the imperialists who have been supporting the pro-coup forces in Honduras.

“How horrible it was to see a legitimate president receiving one who had usurped his position, giving him equal treatment,” Chávez told reporters. “This de facto president should have been arrested in Costa Rica.”

Honduran activists have claimed prominent Venezuelan and Cuban rightists, including Robert Carmona-Borjas, in exile in the United States since the failed 2002 coup in Venezuela, and members of the Miami-based Cuban exile group Alfa 66, were in Honduras at the time of the coup and may have been involved in carrying it out.

Large demonstrations against the coup government continue in Honduras, recently blocking several important highways. And reports have surfaced that as many as 800 demonstrators have been jailed since the coup, most of them immediately after the massive demonstration last Sunday at the Toncontín Airport, when authorities declared in late afternoon that the curfew would begin at 6:30 instead of the usual 10:00, giving the activists little time to find safety.

The Salvadoran website El Faro quotes Honduran Cardinal Óscar Rodríguez Maradiaga as saying, “Lately I have verified something that didn’t exist in Honduras before, and that is class hatred. And it is something that appears in a systematic form. Mel Zelaya had advisors from Venezuela, and class hatred was the strategy.”

In the meantime, anti-coup activists point out that Roberto Micheletti was one of a group of representatives who introduced a bill in 1985 to transform the legislature into a constituent assembly for the purpose of modifying the 1982 constitution to permit the re-election of President Roberto Suazo Córdoba, a member of Micheletti’s own Partido Liberal. The bill eventually failed. The coup government claims Zelaya’s effort to poll the citizens on writing a new constitution was intended to permit his reelection and cite it as the illegal act that justified his removal from office.