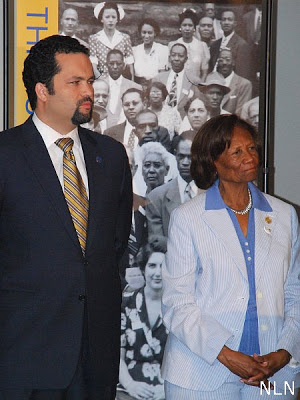 As the NAACP kicked off its convention and 100th birthday bash inside the Sixth Avenue Hilton, a group of protesters from the World Can’t Wait and the Granny Peace Brigade held a protest outside the hotel.

NEW YORK — The National Association for the Advancement of Colored People is celebrating its 100th birthday this year —- with a convention in the city where the association was born.

New York has been home to many civil rights and anti-war organizations. This weekend saw something unusual — an anti-war protest outside a civil rights convention. As the NAACP kicked off its convention and 100th birthday bash inside the Sixth Avenue Hilton, a group of protesters from the World Can’t Wait and the Granny Peace Brigade held a protest outside the hotel. Their issue: that NAACP president and CEO Benjamin Jealous had invited “Army Strong” recruiters to the convention.

The NYPD was also in position outside the hotel, providing security for the event. Officers told protesters they had to move into protest pens around the corner. Protesters stood their ground, arguing that they would be invisible on the side street and that they had a legal right to engage in First Amendment protected activity. Shortly after a legal observer from the National Lawyers Guild arrived on scene police relented.

As police and protesters negotiated, the NAACP held a press conference. Roslyn Brock, vice-chair of the NAACP’s board of directors introduced Leon Russell, a national board member from Clearwater, Florida. Russell gave an overview of the convention program which includes an appearance by President Barack Obama, making good on a campaign promise, and the issuing of an award to NAACP chairman and venerable civil rights activist Julian Bond.

Hazel Dukes, chair of the New York State chapter of the NAACP told the assembled journalists, “I hope that when you write this story that you tell the world that the NAACP is alive and well.” Dukes went on to say that she expected 2000 young people would be in attendance at the conference and that in some ways the convention was a passing of the torch. Dukes introduced the current president and CEO of the NAACP, saying that some of the older members of the association had decided to “take a chance” and give the reins of leadership to a “new baby, thirty-six years old, Benjamin Todd Jealous.”

Jealous spoke about the continued relevance of the association in the modern age noting that, despite an African-American president being in office, little has changed for working families.

“The distance between a child’s aspiration and family’s situation is the exact measurement of a parent’s frustration,” he said.

“The Republican Party needs to lift up the legacy of their historical leader, of our historical inspiration, President Lincoln, and stop trying to resurrect the nonsense of Jefferson Davis,” Jealous added.

John Payton, president of the NAACP’s Legal Defense Fund, spoke about the historic role of the association in the civil rights struggle, asking the crowd, “What would we look like as a country if we had not had the NAACP?”

Payton provided a list of Supreme Court nominee Sotomayor’s impressive achievements, saying that if he didn’t mention that the judge was a woman and Puerto Rican, people would be united in saying “who better understands the needs of our country?”

Cesar Perales of Latino Justice / Puerto Rican Legal Defense Fund thanked the NAACP for all of its contributions to the Latino community. Perales echoed Payton’s positive assessment of Sotomayor and asked the NAACP faithful to stand behind her during the confirmation hearings.

In a question and answer segment following the prepared remarks an anti-war protester who had written a letter to Benjamin Jealous before the event asked the NAACP CEO why he had invited Army recruiters to the convention.

Jealous told the activist that the NAACP had worked to desegregate the military and would have the traditional dinner to honor those who served.

“While we do oppose this war we are very proud of their service,” he said.

When pressed on the issue by a second activist, Jealous denied that the Army was intending to recruit youth attending the convention, saying that “these are your words, not ours.” He declined to comment further saying that he had already answered the question.

The NAACP’s convention will run through Thursday, July 16. President Obama will address the final plenary on Thursday.

[Thomas Good is the editor of Next Left Notes.] 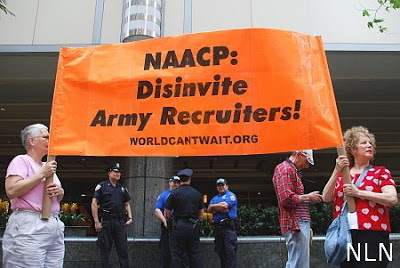