Iranians Operatives Use English Language to Make US Look Like Chumps

BBC Reporters Taken In At First 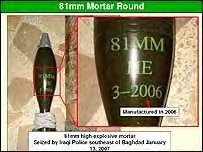 The weapons were reportedly made after the fall of Saddam Hussein

BBC reporters called to a news briefing on Sunday by US authorities were seen puzzling around the Green Zone newsroom water cooler after the briefing and were soon thereafter asked to leave when widespread laughter broke out in response to incredulous journalists’ questions about markings in English on weapons supposedly supplied to Iraqi insurgents by Iran, said a source who spoke on condition of anonymity.

Stung by criticism of the doctored evidence for Saddam Hussein’s supposed possession of weapons of mass destruction that was the justification for the US invasion, the US authorities said they’d delayed presenting evidence of Iran’s support for Iraqi insurgents — supposedly found in January — until now.

Because it was presumed that none of the reporters had extensive military experience, the US provided three “experts” who, speaking on condition of anonymity, presented various points to the assembled journalists.

Three men presented by US authorities as military and explosives experts showed shiny green mortar rounds and documents they said had been supplied by Iran to insurgents south of Baghdad earlier this year. One expert pointed out that the manufacturing date on the mortar rounds indicated they were made after the US invasion.

One expert went into some detail to explain why a mortar’s tail fin was of a type only known to be produced in Iran. He told reporters that a sophisticated machining process was required to manufacture the metal liners of the EFPs. This had previously been traced to Iran. The capability for such a process had not yet been seen in Iraq.

Most of the reporters hastily scribbled down the details provided by their briefers and the briefing was apparently about to adjourn when a small boy entered the room apparently searching for a restroom. Gawking at the weapons display, the boy asked why the mortar rounds thought to be from Iran were marked in English letters — ME — that stand for Military Explosive, instead of being marked in the cursive Persian script used in all other written communications in Iran.

“Son, you ever been chunked out of a helicopter at 5,000 feet?” asked one of the briefers.

“I was just curious,” said the child.

“Let me get back to you on that,” said the briefer. The meeting was then hastily adjourned.

That expert appeared at the water cooler a few minutes later. “I was just joking about that kid,” he said, seeming to be embarrassed.

The official then explained that previously unbeknownst to — and unnoticed by — the Americans, Iranian operatives had perhaps stolen into the Green Zone in the previous evening, painted over the original Iranian-language markings on the mortar rounds, and stenciled “81 MM ME” over the new paint, and left again, presumably for Tehran.

“Those people — the Iranians — will go to any lengths to embarrass the US,” said the American official in charge of the briefing.

Asked by a BBC stringer if he were referring to the Iranians or the child, the official refused to answer.

For the original BBC story (prior to the events towards the briefing’s end) go to http://news.bbc.co.uk/2/hi/middle_east/6352593.stm