Crassnerd Reporting on Harry and Jenna

Jenna Bush to Not Go, As Well

A final decision by the British Military Command has determined that Prince Harry, whose last name apparently is unknown, but who remains consistently in the British press anyway, will not be going to Iraq with the soldiers with whom he has trained over the past year.

“I just don’t think so,” said General Sir Richard Dennett, Chief of Staff of Military Personnel of the British Army. “I mean, he’s third in line for the British throne. If he were to be killed, the fourth in line would move up, and no one really knows who that is,” he added. “It would be a terrible mess.”

“But I really, really, wanted to go,” said the Prince. “I mean: who wouldn’t want to carry the flag of a failed empire in a place where the sun never shines. I mean, never set. Once, anyway,” said the Prince, who said he had been taking elocution and rhetoric lessons from “an unnamed friend of Tony Blair from Texas.” 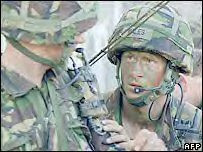 The announcement, which represents a U-turn on an earlier decision, was made amid reports militant groups in Iraq planned to kill or kidnap the prince.

Clarence House said Prince Harry was “very disappointed” but would not be leaving the Army as a result.

The decision sparked some derision among American troops in Iraq.

“Not leaving the army because he’s not being sent to Iraq?” asked US Army Pvt. Sitting Duck, of Shawnee, Oklahoma. “I wish I had a choice about whether to leave the army based on whether they sent me to this Hell-hole,” said Duck. This is my third trip,” he added.

“As far as plans to kill or kidnap the prince, hell, the insurgents plan to kill or kidnap us all, and to me it looks like they’re doing it, even if it’s taking them longer than it looked like it might at first,” said Duck.

“Not sending Prince Harry is an operational decision taken by the military which we of course respect,” said a second Downing Street spokesperson, spared military service in exchange for being a mouthpiece for the British monarchy.

But Republic, a group which campaigns for an elected head of state, said the decision showed that “the prince should never have joined the Army”.

In a statement it said: “This is a scandalous waste of taxpayer’s money, brought on by the Windsor family’s obsession with linking themselves to the military.”

Reg Keys – whose son Thomas was killed while on active service in Basra in 2003 – said he found the decision distasteful and questioned whether insurgents could have told the prince apart from other service personnel.

“It would appear that Harry’s life is more valuable than my son or the other nearly 150 service personnel who’ve given their lives,” Mr Keys added.

“A whiner,” said Gen. Dannatt. “Where is the famous stiff upper lip of our yeomen? What has happened to the ‘Do or die’ ethic of Rudyard Kipling’s time? Where is the “I regret that I have but one life to give for my country” of an earlier day?”

Reminded that that last statement was made by a patriot fighting against — not for — the British in another, earlier, colonial war, Dannatt said the point was the same: that war is fraught with risk.

Attention of the press had ping-ponged across the Atlantic earlier in the afternoon briefly when a Pentagon spokesperson, speaking on condition of anonymity, announced that the US President’s daughter Jenna Bush had volunteered to take the prince’s place.

That offer was subsequently withdrawn, said a second Pentagon spokesperson, also speaking on condition of anonymity, when the Bush daughter learned that the identity of the soldier was a different prince that what she first had assumed. 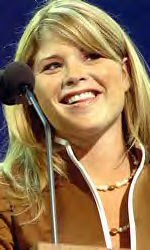 Informed that her offer had already been conveyed to the British royal family, Ms. Bush seemed surprised. “Ohmigod, whatever,” said Ms. Bush. “You mean they still have, like royalty there? That’s weird,” she added. “I’m going shopping.”

Army Says Queen To Go Instead

In a response to critics that temporarily shocked reporters assembled in the Downing Street press room, Gen. Dannatt announced that because of the controversy surrounding the legitimacy of the monarchy — generated by the on-again, off-again deployment of the prince, Prime Minister Tony Blair has decided that in leiu of Prince Harry going to Iraq, his place in the volatile region will be taken by Queen Elizabeth II.

That announcement briefly caused no small amount of consternation and disbelief among the reporters assembled in the press room, with one reporter challenging General Dannatt to provide proof of what he called “an absurd statement whose jestful nature belittles the service of those British soldiers fighting in the Middle East.”

Asked if the Queen were not above the age of those accepted for duty in war zones, General Dannatt clarified his statement.

“The boat, lads, the boat is going,” said Gen. Dannatt. Dannatt said the HMS Queen Elizabeth II — converted in 1979 to a passenger cruise ship, but leased as a charter ship last week by the British military, will be leaving London Harbor shortly, to briefly and symbolically join American warships in the Persian Gulf.

HMS Queen Elizabeth 2 will sail on Friday.
“It’s a regal ship, lads, and if it gets blown up, well, the disposal costs will be less than the expense of a funeral for a prince,” said Dannatt, presenting the move as a combination of strategically smart realpolitik and economic common sense. “We’re still paying for Diana’s funeral, you know,” he added.

1 Response to Crassnerd Reporting on Harry and Jenna