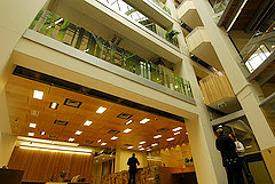 POZNAN, Poland – Energy use in buildings accounts for one-third of global greenhouse gas emissions, but the potential of the construction sector to combat climate change has not been tapped, according to a new report issued by the United Nations Environment Programme.

The report was released Saturday to governments meeting in Poznan for the latest round of UN climate change talks. The negotiations are aimed at reaching agreement on a successor pact to the Kyoto Protocol, whose first commitment period ends in 2012.

Today’s commercially available technologies make it possible to halve energy consumption in both new and old buildings without significant investment, the report finds.

Yet only 10 out of some 4,000 projects in the pipeline of the Kyoto Protocol’s Clean Development Mechanism, which finances initiatives that help reduce emissions, are designed to curb the use of energy in buildings.

The UN Intergovernmental Panel on Climate Change, co-recipient of last year’s Nobel Peace Prize, has warned that building-related emissions could nearly double from almost nine billion tons in 2004 to nearly 16 billion in 2030.

The surge will be driven by construction booms in the next two decades in Asia, the Middle East and Latin America.

“Report after report is now underlining the huge, cost-effective savings possible from addressing emissions from existing buildings alongside designing new ones that include passive and active solar up to low-energy heating and cooling systems and energy-efficient systems,” said UNEP Executive Director Achim Steiner.

Dozens of surveys conducted worldwide show that up to 30 percent reduction in emissions from residential and commercial buildings can be achieved by 2030 at a net negative cost.

Effective measures include improved ventilation and insulation, stepped up use of natural lighting and the use of solar and other natural heat sources.

The sector remains virtually untapped because six years after the start of the Clean Development Mechanism, very few building projects have managed to enter its pipeline. Nearly half of all proposals were rejected during the registration phase.

High administrative costs and weak financial incentives as being among the barriers for approval by the CDM, according to the report entitled “The Kyoto Protocol, the Clean Development Mechanism, and the Building and Construction Sector.”

Eight projects proposed by a Brazilian supermarket chain, for instance, were rejected because of difficulties in accounting for the projected 20,000 tons of annual carbon savings. Only $3,000 of carbon revenue would be generated by the store, which is less than the basic operating costs for the projects and would not cover the energy-efficient equipment necessary.

Kuyasa retrofit project in Cape Town, South Africa is the first CDM-registered project to improve the thermal efficiency of low-income housing. The project aims to install solar water heaters, insulated ceilings and compact fluorescent lights in over 2,000 residential homes for low-income families, resulting in cuts of 6,580 tonnes of CO2 equivalent every year. 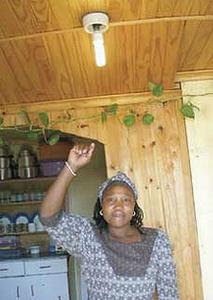 Yet despite successful registration in 2005, the project has yet to take off except for 10 demonstration homes, illustrating the challenge of using the CDM to finance such projects.

In a related development, UNEP announced Saturday in Poznan that the Pacific Island nation of Niue, the United Kingdom city of Slough and the New Zealand city of Waitakere are among the latest to sign on to its Climate Neutral Network.

That initiative brings together countries, cities, businesses and organizations which pledge to reduce greenhouse gas emissions.

“For many small island developing states like Niue climate neutrality is more than just a concept – it is a matter of survival,” Steiner said. The tiny nation, with a population of some 1,700, releases jsut 0.003 million metric tons of carbon dioxide annually but is at risk from rising sea levels as polar ice caps and glaciers melt.

Slough, home to nearly 120,000 people and situated between London and Bath, is seeking to have all public transport and council vehicle run on cleaner fuel and slash its emissions by one-fifth in the next two decades.

Waitakere, the fifth largest city in New Zealand, is aiming to stabilize per capita emissions by 2010 and reduce them 80 percent by 2051.

In addition, 11 companies and organizations have signed on to the Climate Neutral Network in Poznan, joining the four countries, four cities and dozens of other participants in the initiative.