Dave Zirin : Why I Root for Argentina 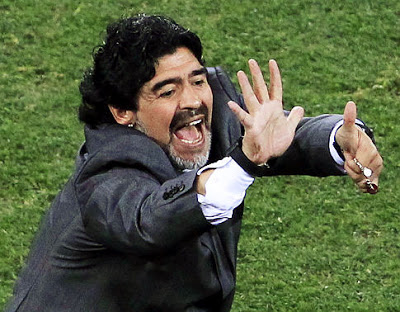 No one can predict his devilish tricks: Argentina coach Diego Maradona. Photo by Ammar / AP.
The beautiful game:
Why I root for Argentina

Before the start of the World Cup, I broadcast my rooting interest with the obnoxious insistence of a nuclear-powered vuvuzela: Argentina all the way.

He screams and cheers. He complains and cajoles. He smiles. He prays. He blesses himself. He hugs. Actually, he hugs a lot. He even kisses his players. Pushing 50 yet wearing earrings and a salt-and-pepper goatee, he remains the biggest presence in the building — and that includes his megastar players such as Lionel Messi and Tevez.

In his playing days, Maradona made people reconsider the sacred idea that Pele was surely the greatest player to ever patrol the pitch. He went from soccer superstar to Argentine folk hero during the 1986 World Cup, when he “avenged” the 1982 British defeat of Argentina in the Falklands War by defeating England in the quarterfinals, with a little help from the “Hand of God.”

No one can predict the devilish tricks this inventor of surprises will dream up for the simple joy of throwing the computers off track, tricks he never repeats. He’s not quick, more like a short-legged bull, but he carries the ball sewn to his foot and he’s got eyes all over his body. His acrobatics light up the field… In the frigid soccer of the end of the century, which detests defeat and forbids all fun, that man was one of the few who proved that fantasy can be efficient.

Efficient fantasy is the best way to describe Argentina’s current run to the quarterfinals. In a modern world of robotic soccer strategems, they play with the wicked grace of decades past. Given that success breeds imitators, I would argue that it is in the best interests of international soccer to see Argentina take it all the way.

For those experiencing this World Cup in the throes of neutrality, there are political reasons to support Argentina as well. This has received next to no media coverage either in their native Argentina or around the world, but the team has fully embraced the courageous group of grandmothers known as Abuelas de Plaza de Mayo. This organization is devoted to finding out the truth about the fate of Argentina’s desaparecidos — the people forever imprisoned or disappeared by the military dictarorship of Jorge Rafael Videla — during Argentina’s Dirty War of 1976-1983. 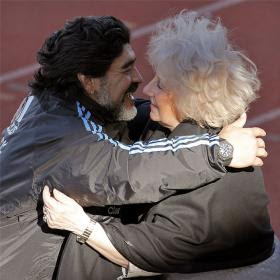 Diego Maradona hugs Abuelas president Estela de Carlotto.Photo from as.com.
At a training session in South Africa, the entire Argentine team unfurled a banner that read, “We Support the Grandmothers of the Plaza de Mayo for the Nobel Peace Prize.” The group has in fact been officially nominated for the prize and Abuelas president Estela de Carlotto, is in South Africa, meeting with Nelson Mandela and other world leaders. She has also been publicly — and literally — embraced by Maradona.

The critical work that Abuelas has done will only receive a greater spotlight if Argentina continues to advance. This makes all those connected with Argentina’s dirty war, who still hold tremendous power in the country, increasingly, and deliciously, apprehensive.

I can certainly understand, and have heard from numerous people, that these kinds of political concerns shouldn’t play into our rooting interests when it comes to the World Cup. It should just be about the game.

But this is like wishing a double cheeseburger didn’t have cholesterol. There is simply no sporting event on earth more entangled in politics than this brilliantly bombastic tournament. Anytime you have half the earth tuned in — as colonies play their former colonizers and dictatorships challenge democracies — politics follows like rainbows after rain. As long as politics is part of the mix, we might as well support a team that in addition to epitomizing “the beautiful game” stands with a beautiful cause.

[Dave Zirin is the author of the forthcoming Bad Sports: How Owners are Ruining the Games we Love (Scribner). Receive his column every week by emailing dave@edgeofsports.com. Contact him at edgeofsports@gmail.com. This article also appears in The Nation.]