David McReynolds : Egypt, Beyond the Pyramids 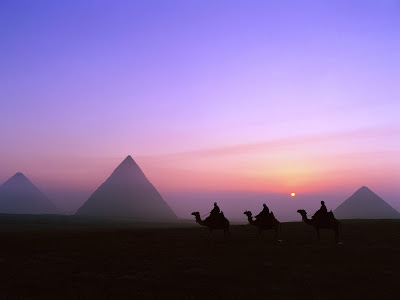 Image from Mystic Journey.
Egypt, Beyond the Pyramids

Now we are seeing one of the rarest of things — a moment when the people lose their fear of the State.

This is not really about Egypt but about revolution, something we have just seen in Tunisia and are certainly seeing in Egypt. Revolutions are baffling things because while we can “explain them” after the event, we can’t predict them before they arrive.

They have uncertain beginnings, and uncertain endings. I remember, in high school, reading Lincoln Steffens’ autobiography (which is probably still in print). In it he discussed the Mexican Revolution and the Russian Revolution. (Steffens is remembered for his quote, after his return from the Soviet Union in the early days of the revolution, when he said “I have seen the future and it works.”)

He was concerned with the issue of “Thermidor,” a term that comes from the French Revolution, when on July 27, 1794 — “9 Thermidor” under the revolutionary calendar — the deputies, weary of mass executions (1,300 in June of that year), ordered the arrest of Robespierre and other members of the “Committee of Public Safety,” and had them guillotined, marking the end of the Revolution and the consolidation of at least part of the old order.

The revolutions in the United States, Russia, and Cuba share one thing in common — those against whom the revolt was carried out generally were driven out of the country. In the U.S. the loyalists (perfectly decent folks, for the most part) fled to Canada, the British West Indies, or back to the home country. In Russia the Civil War killed a great many of the White Russians, and those who did not die, fled into exile.

Cuba wisely permitted dissenters to leave — the Mariel boatlift being an example of how the regime nonviolently eliminated a chunk of opponents. In France, despite the violence of the revolution, most of the opposition survived and in some ways France has suffered from this division to the present day.

We shall see, certainly, a longing in Egypt for order. Revolutions are great fun during their early days. (Despite the violence, there is an extraordinary exhilaration to them. Those who have seen Before Night Falls, which is generally seen as an anti‐Cuban film, as it tells the story of the poet, Reinaldo Arenas, will have to concede that it captures the early excitement of the revolution very well.)

Then food runs short, there is disorder (as we see in Egypt), travel is disrupted, the economy grinds to a halt, and there is a longing for a return to a sense of order. Even Lenin had to reverse course early in the Soviet Revolution, introducing his New Economic Policy (NEP) to save a foundering economy.

But for now we are seeing one of the rarest of things — a moment when the people lose their fear of the State, when, as the Chinese say, “the mandate of heaven has fallen” and it is only a matter of time before the old regime must yield. We saw this for a few days in France in 1968, when it seemed as if a true revolution was about to sweep the country. Those my age who were active in the Vietnam anti‐war movement saw it for a brief moment after Kent State.

I remember being at a meeting of the anti‐war leadership at Cora Weiss’ house in Manhattan when the news broke that the U.S. had invaded Cambodia. We knew we had to make an immediate response, there was no time for a mass demonstration, and so we decided to go to Lafayette Park in front of the White House where, even though we could only rally a few hundred people, we would be sure to be arrested under the rules then in place, which limited the number of demonstrators.

We sent out the call to our networks. But between the time we met, which I think was on a Friday, and May 4th, which was Monday, the students at Kent State were shot dead by the National Guard.

This led to a general strike of students all across the nation. Campuses simply closed down spontaneously. So, on that Saturday we didn’t have a few hundred people — we had close to 100,000 in Washington D.C., rallied in a week’s time.

We were nervous, not knowing if Nixon would give the order to shoot. He was nervous too — Lafayette Park was ringed with buses, nose to nose so that no one could get in. But Nixon permitted the demonstrators to gather on the great lawn behind the White House for a “legal rally.” The end of the war was still five years in the future, but in a sense that day marked the end of the legitimacy of the war in the eyes of the majority of Americans.

In Vietnam there were open revolts within the armed forces. It was an exciting time to live through… but of course it was not a revolution. Nixon was allowed to resign and Henry Kissinger is still able to appear on TV news channels as a foreign policy adviser, when he belongs in prison.

A far more important and genuine revolution was that in Iran, where a general strike in October of 1978 led, first, to efforts to control the people by firing live ammunition into crowds of youth surging the streets (those youth wore sheets of white, symbolic of death, meaning they were prepared for burial), until the police finally abandoned their posts, and in January the Shah had to flee for his life.

The violence of the Iranian Revolution was almost entirely on one side — the Shah’s military. Ironically, despite massive U.S. military aid, the Shah had few of the standard crowd control weapons, such as tear gas. So secure did the regime feel, that the last place it expected a revolt was in the streets of Teheran.

The Russian Revolution is called the October Revolution, because the Bolsheviks took power on October 25 of 1917, but it actually began in April of that year. We may expect the Egyptian Revolution — if, as I expect, it succeeds — to follow a similar uncertain path.

To sum up thus far: no one knew in advance that Tunisia, Yemen, and Egypt would be swept by revolutionary fervor this winter. And no one can be sure, at this writing, what is going to happen in North Africa and Egypt. We can, however, note several things. One is that the U.S., while it doesn’t know which way to turn at the moment, had been pressuring for change — some of the U.S. aid funds had been going to pro‐democracy contacts in Egypt.

This doesn’t mean the U.S. favors democracy in Egypt; it doesn’t. It means that at least some in the State Department and the CIA knew that Mubarak’s situation was not stable. U.S. policy, not only in the Middle East but around the world, has been to favor “stable” regimes, which has meant military dictatorships. Egypt has been notorious for its authoritarian ways, its lavish use of torture (as was the Iran of the late Shah). But the U.S. has been happy to pour billions of dollars into Egypt to buy a secure alliance.

Israel has also had a strong interest in discouraging democracy in Egypt — since Mubarak has kept the Muslim Brotherhood under control, and acted to establish peace with Israel.

Democracy has never been a favored choice of the U.S. leaders. During the Cold War we were happy to support Franco, the Fascist dictator in Spain. We engineered the overthrow of the democratically-elected government of Iran in order to install the Shah. We, and Israel, had urged democratic elections in the Gaza strip, on the assumption the Palestinian Authority would win; unhappily, Hamas won and Gaza has been on the shit list of both the U.S. and Israeli governments ever since.

I remember the painful lesson I got in how “liberals” view free elections during the struggle of the Vietnamese. Robert Pickus, who had had financial backing from the War Resisters League to set up a group in Berkeley in 1958 called “Acts for Peace,” before Vietnam was on the agenda, opposed those of us who called for unconditional withdrawal from Vietnam, on the grounds this wasn’t fair to the Vietnamese, because it would leave them “at the mercy of the Communists.”

We pointed out that it was the U.S. that had blocked the free elections Vietnam had been promised in 1956. Pickus argued that we had to insist on a peace settlement which would guarantee not one, but two free elections. He knew that Ho Chi Minh would win the first; he hoped that with time and U.S. funding of the opposition, the Communists might lose the second.

The Establishment is never in favor of free elections if it thinks it might lose. If one looks back at the U.S. policy (and that of Israel) in the Middle East for the past 50 years it has been a series of gambles that did not pay off. In Israel’s case, the invasion of Lebanon in 1982 lead directly to the creation of Hezbollah, which is currently taking control of the government of Lebanon, thus extending Syrian influence further into Lebanon.

The U.S.managed to block Iranian control of Iran, but in the end lost out to the radical Muslims, who now play a key role in Iraq (the invasion of which was among the most remarkable blunders the U.S. has ever made).

We do not know what will happen tomorrow or next month. But we do know that the map of the Middle East is going to be very different by the end of the year. The U.S. is almost certain to lose its long‐term alliance with Egypt. It is very uncertain what will happen in Tunisia or Yemen, but in all cases U.S. influence will be greatly weakened. In Iraq the latest political developments insure that Iran will have more influence there than the U.S. In Lebanon, Syrian influence has been strengthened.

Whether any of this will induce Israel to make peace is hard to say. But a look at the range of events in the past six months strongly suggests that, once more, the brightest and best can win many short‐term victories but achieve major long‐term losses.

The most serious question is what we do here — since neither you nor I have any influence on the events in Egypt. And what we need to do is to give our strong public support to the democratic forces in Egypt, even though we cannot know how long they will be democratic. One thing, however, is quite certain: we cannot determine the policies of those nations. We can only wish them luck, and reach out to them now.