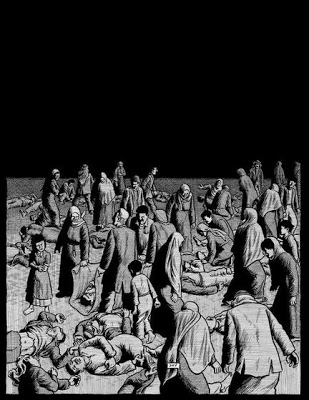 “The people were afraid. There was no shouting there. No screaming.” Families look for their relatives after a massacre in the Gaza Strip in 1956. Illustration from Footnotes in Gaza by Joe Sacco.
Times’ review of graphic novel suggests
shifting attitude towards Isreal

Sometimes the most important news comes between the lines. The New York Times Book Review of December 27, 2009, carried a remarkable full page piece on page 13. “They Planted Hatred in Our Hearts” was the banner heading of a book review by Patrick Cockburn, of Joe Sacco’s Footnotes in Gaza: A Graphic Novel, an illustrated history, 418 pages.

This is not a story about recent events in Gaza, not the “Cast Lead” offensive which so shocked the world. No, it is a book about two mass killings of Palestinians, by the Israeli military in 1956 — so long ago they have been forgotten.

Briefly — because I want to discuss the importance of the “fact” of the review, not the content of Sacco’s book — in 1956, when Israel launched its attack on Egypt, there were 275 Palestinians killed in the town of Khan Younis and 111 in Rafah, a town a few miles away. This was in the course of a November 12 military operation by Israel. The killings were mass murders of non-combatants. The story Sacco tells has been well-documented by Palestinian and Israeli eyewittnesses, and by UN accounts.

What makes the review important is less the account itself — every war has such actions. Both the Palestinians and Israelis have engaged in targeting noncombatants. The U.S. certainly did so in Indochina, the Soviets did it in Afghanistan. It is by now so routine that one asks why Joe Sacco took the trouble of turning back in time, to 1956, and documenting these particular events.

It was because Sacco felt these mass murders laid the basis for the violence of the second Palestinian intifada.

What I found important is the fact this book review was placed so prominently in The New York Times Book Review, or that it appeared there at all. Twenty years ago such a book would not have been reviewed in any major New York publication or, if reviewed, would have been “balanced,” suggesting perhaps the massacres had not taken place, or were provoked. But that Cockburn’s review is carried, that these ancient massacres are brought back to life, and perhaps most important, the fact the review included a quote from the Israeli chief of staff, Moishe Dayan, that is remarkable.

Six months before the Israeli offensive against Egypt, Dayan made a famous speech at the funeral of an Israeli commander who had been killed on the Gaza border. Dayan wondered aloud what explained the Palestinians’ “terrible hatred of us” and then gave this answer to his own question:

For eight years now they have watched how, before their very eyes, we have turned their lands and villages, where they and their forefathers previously dwelled, into our homes.

The killings of 50 years ago were never punished. The Israeli army inquiry into the events at Rafah and Khan Younis can no longer be found in the Israeli military archives.

Those of us who have, over the years, grown more critical of Israel, leading, in my case, to a call for a total end of all economic and military aid to Israeli, have been dismissed as anti-Semitic, or as “obsessed” with Israel, when there are so many other horror stories elsewhere on the planet. (And there are — any issue of the New York Times reminds us of terrible violence and crimes across the globe).

But as time has passed and the hopes of the young Zionist movement have been dashed by reality, more voices are being raised, many of them within the American Jewish community itself. There is an active group of Jews within Israel which I might call the “saving remnant,” which has broken the silence, has sought out the Palestinians, has made alliances, demonstrated, been arrested.

So today we have the unthinkable — American and Israeli Jews united against the actions of the Israeli State. And the most important newspaper in the U.S. carrying a painful account of mass murders of noncombatants by the Israeli Army more than 50 years ago. This is a case where it is less the fact the book was written, but where and how it was reviewed, which should give pause to the uncritical supporters of Israel. The days of the unquestioned U.S. alliance with Israel are ending.

[David McReynolds is a former chair of the War Resisters International, was the Socialist Party candidate for President in 1980 and 2000. He is retired and lives on the Lower East Side of New York with two cats. He can be reached at dmcreynolds@nyc.rr.com.]