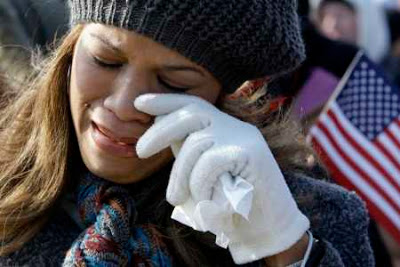 Aleesha Chaney, of Springfield, Ill. is seen during the inaugural ceremonies on the National Mall Tuesday, Jan. 20, 2009, before the swearing-in ceremony of President-elect Barack Obama. Photo by Matt Rourke / AP.

These are terrible times and the great demands for change are so glaringly apparent. World capitalism is sinking economically and its continued unrestrained operation is threatening the viability of the planet as a place fit for human society. The situation is becoming desperate and the hopes of much of the world are being placed on Obama’s shoulders.

“I’ve always introduced myself as a black American. From now on, I’m just an American.” — Forest Whitaker.

What does the election of Barack Obama as the president of the United States already mean and what does it promise? There are many correct answers. The following are what I believe to be among the most significant.

What Obama’s election means already was reflected most clearly in the faces of African-Americans attending his inauguration. They bought flags and waved them proudly, sang “The Star Spangled Banner” lustily and tears ran down their faces. This was a pinnacle moment of victory in the history of African-Americans on the scale of the Emancipation Proclamation and the 14th Amendment in the 1860’s and the passage of the Civil Rights and Voting Rights Acts in the 1960’s. Without going so far as saying that racism is dead in America, Obama becoming president went far to rectify a great historical injustice and American racism seems now resolutely defeated.

For the first time in US history, it is confirmed with finality that we are no longer a white society with people of color secondary. Now we are quite officially a multi-racial, multi-ethnic society and arguably the human society that has gone the furthest toward the resolution of racial issues. Whites who have in some way contributed to this struggle, especially those of us who have done so throughout our adult lives, also justly feel a great sense of satisfaction and validation.

Although I have many demands yet unmet and progress is still largely only a promise, I have never in my 65 years felt so hopeful and, although not yet entirely proud, at least less embarrassed to be American. That feeling reflects a great healing that has already been achieved. The ideological foundations of the American Revolution inspired the French Revolution and freedom movements ever since, including that of Ho Chi Minh. Undeniable American progress in racial issues, symbolized by the election of and broad popular support for this African-American president, will reverberate throughout all humanity, influencing racial politics globally henceforth.

We must also recognize the meteoric ascendancy of Barack Obama, which has few historical equivalents. Five years ago, he was a little known state senator in Illinois. Today, he is the most powerful and admired politician in the world, arguably more so on this day than any previous figure on the world stage. He is an avatar, a phenomenon, having risen suddenly to a pinnacle perhaps never previously achieved. He has transformed in an instant the president of the US from the world’s most vilified individual to its most respected. This ascendancy is due not only to his amazing political gifts, but also the world’s neediness. Much of the world beseeches him for leadership. In his inaugural address he forthrightly asserts that a new era in US relations with the world is upon us. The old equations have changed and the world must adjust. For example, I soon expect the delivery of a verbal olive branch from Caracas.

He has an opportunity to globalize leadership, to influence national politicians with his own popularity and credibility among their citizens. The responsibilities heaped upon him are worldwide, truly awesome and unprecedented. Into this role the American people have thrust a relatively young but exceptionally gifted African-American with an African Muslim name. Only a historical moment ago, that was inconceivable.

The transformation embodied by Obama succeeding Bush is stunning. Bush left office with the lowest approval ratings of any US president – ever. Even Nixon resigning in disgrace was more popular. Obama enters office with the highest approval ratings ever polled for an incoming president, higher than Bush at his peak after 9/11. At this moment, these public opinions are held not only in this country, but worldwide. The current good will toward him is almost boundless. His political enemies are cowed, forced to wish him well and not appear obstructionist.

Obama takes over a powerfully unified government. His party’s congressional majorities are dominant. Although they lack one vote from having a filibuster-proof majority in the Senate, three Republican senators are from states where Obama won by greater than 10 per cent. He’ll have a majority on the Supreme Court eventually and will seat a new generation of federal judges in the meantime who will starkly contrast with those appointed during recent decades of Republican rule. He has already displayed copious skills as a consensus builder. His potential opposition is in disarray.

The Republicans have been laid low. The pillars of their power for the past 40 years have been racism, unregulated market fundamentalism, anti-choice on abortion, small government, unprogressive taxes and a militaristic, unilateral foreign policy. These positions are now all political losers. George W. Bush’s failures only amplified their degeneration. I find it hard to imagine how the Republicans reconfigure themselves so as not to become a historic anachronism.

What does Barack Obama promise?

If Obama is to be successful, he will have to become the first “socialist” president of the US and an inspirational leader of the world. If so, he will be a “socialist” in action although not in name, and not because he is an ideologically committed socialist, but because the objective conditions demand solutions that involve and benefit the entire society, a mobilization into a common cause and an augmentation of the commons. If Barack Obama is pragmatic, he will demand solutions in those terms. This is certainly not to say that he will abandon capitalism. To succeed Obama will have to become a social democrat in the European tradition, an FDR and a Leon Blum. The American model of free market fundamentalism, of laissez-faire capitalism, much as Marx predicted, is conspicuously expiring from the weight of its own inherent contradictions and will have to be seriously restructured. That restructuring will have to be in the direction of internationalism, egalitarianism and conservation if it is to seriously address the problems that face us.