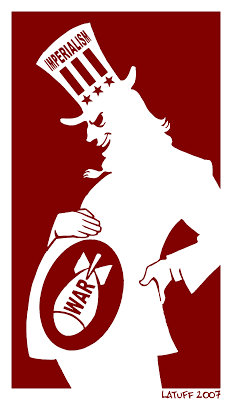 Obama vs. Palestine, Afghanistan and Iraq
By Ron Ridenour / The Rag Blog / January 21, 2008

Muntazer al Zaidi, the Iraqi shoe thrower, was the champion on presidential inauguration day not Barack Obama, whom 1000 Mexican demonstrators criticized for not having protested Zionist Israel’s invasion of Gaza.

The “embajada de muerte” (Embassy of Death) was attacked with a torrent of shoes as speakers denounced US imperialism for supporting Israeli genocide. The protest was organized by the Mexican Movement in Solidarity with Palestine and the microphone was open to all.

Member groups of the umbrella organization identified Israel as a tool for US domination of the Middle East and especially its fuel. The movements for the emancipation of women and for revolutionary vendors spoke of the authentic struggles for national liberation of the Palestinians as well as the Afghans, Iraqis and the Basques.

Another group, Machetearte, explained that Obama won the elections precisely because the peoples of Iraq and Afghanistan have resisted imperialism­’s invasion and are beating back the mercenary soldiers.

A religious group pointed out that Gaza is a new Auschwitz and those responsible should be brought before a new Nuremberg. They pointed out that Obama must honor his words, the “US is a friend of all nations,” and thus pull out invading and occupying troops throughout the world.

The organizers took on their own neo-liberal government for timidity before the slaughter of innocent Palestinians. Mexico’s government is a lackey still of US imperialism, they said, while much of Latin America is breaking its dependency. The governments of Venezuela and Bolivia were praised for ending diplomatic relations with Israel; organizers called upon their own government to do the same.

For a veteran of protests against imperialism, this manifestation before the embajada de muerte in this city of nearly ten million people reminded me of another one a dozen years ago when some 50,000 of us took the entire eight lane Reforma avenue in support of the Contadora process aimed at kicking the warring United States out of Central American. Now the wars here are over and anti-imperialist governments are in power in some countries. Some are aligned in the new ALBA regional economic pact which operates outside of US imperialism. This is the case in Nicaragua, partially so in Honduras and Guatemala. And in El Salvador, the transformed FMLN guerrilla groups look forward to winning the upcoming presidential elections.

Although US imperialism will remain an active force for some time, it will not take another dozen years for the invaded Middle East to win its sovereignty.