David Van Os : To the Blathering Pols on Labor Day 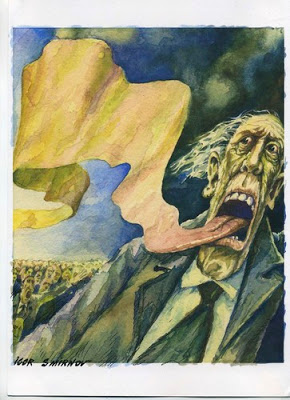 To the blathering pols this Labor Day:

No more lies and excuses!

This weekend a multitude of elected and would-be political officeholders are appearing at Labor Day picnics. Hoping to obtain labor endorsements for their next candidacies, they ascend the speaker’s platforms and loudly swear their undying loyalty to the issues of working families.

My great hope for this Labor Day 2011 is that working people will finally tell the politicians:

We are tired of Labor Day speeches without action. Talking big at a Labor Day picnic where it is safe and convenient is meaningless crap. Tell the truth out there in the world about the class war that the gilded aristocracy of corporate executives and bankers is waging against the people. Tell the truth out there with passion and anger. Fight for the truth. Use your votes in the assemblies of government to defend the people against the powerful. Stop compromising with evil. Stand up and fight for us. Fight to tax the rich, stop the wars, defend workers and unions, restore the Constitution, defend the poor and the helpless, and protect the environment. And next year don’t come back with mealy-mouthed excuses for why you didn’t fight for these things and why you compromised us.

We don’t expect you to win every vote but we do expect you to fight like Travis at the Alamo, like the Minutemen at Bunker Hill, like Chavez in the lettuce fields, like King in Alabama, like Gandhi in India, like Mandela in South Africa, always fighting for the right and never giving up. Fight like a warrior for truth and justice or don’t come back. We would rather be left alone to enjoy next year’s Labor Day with our friends and families whom we love and trust than listen to one more lie or one more excuse from one more compromising politician.