Dealing a Blow in the Oil and Gas Markets 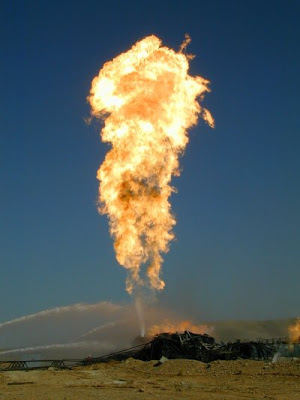 From the details coming out of Ashgabat in Turkmenistan and Moscow over the weekend, it is apparent that the great game over Caspian energy has taken a dramatic turn. In the geopolitics of energy security, nothing like this has happened before. The United States has suffered a huge defeat in the race for Caspian gas. The question now is how much longer Washington could afford to keep Iran out of the energy market.

Gazprom, Russia’s energy leviathan, signed two major agreements in Ashgabat on Friday outlining a new scheme for purchase of Turkmen gas. The first one elaborates the price formation principles that will be guiding the Russian gas purchase from Turkmenistan during the next 20-year period. The second agreement is a unique one, making Gazprom the donor for local Turkmen energy projects. In essence, the two agreements ensure that Russia will keep control over Turkmen gas exports.

The new pricing principle lays out that starting from next year, Russia has agreed to pay to Turkmenistan a base gas purchasing price that is a mix of the average wholesale price in Europe and Ukraine. In effect, as compared to the current price of US$140 per thousand cubic meters of Turkmen gas, from 2009 onward Russia will be paying $225-295 under the new formula. This works out to an additional annual payment of something like $9.4 billion to $12.4 billion. But the transition to market principles of pricing will take place within the framework of a long-term contract running up to the year 2028.

The second agreement stipulates that Gazprom will finance and build gas transportation facilities and develop gas fields in Turkmenistan. Experts have estimated that Gazprom will finance Turkmen projects costing $4-6 billion. Gazprom chief Alexei Miller said, “We have reached agreement regarding Gazprom financing and building the new main gas pipelines from the east of the country, developing gas fields and boosting the capacity of the Turkmen sector of the Caspian gas pipeline to 30 billion cubic meters.” Interestingly, Gazprom will provide financing in the form of 0% credits for these local projects. The net gain for Turkmenistan is estimated to be in the region of $240-480 million.

From all appearance, Gazprom, which was headed by Russian President Dmitry Medvedev for eight years from 2000 to May 2008, has taken an audacious initiative. It could only have happened thanks to a strategic decision taken at the highest level in the Kremlin. In fact, Medvedev had traveled to Ashgabat on July 4-5 en route to the Group of Eight summit meeting in Hokkaido, Japan.

Curiously, the agreements reached in Ashgabat on Friday are unlikely to enable Gazprom to make revenue from reselling Turkmen gas. Quite possibly, Gazprom may now have to concede similar terms to Kazakhstan and Uzbekistan, the two other major gas producing countries in Central Asia. In other words, plain money-making was not the motivation for Gazprom. The Kremlin has a grand strategy.

Coincidence or not, Russian Deputy Prime Minister Igor Sechin traveled to Beijing at the weekend to launch with his Chinese counterpart, Vice Premier Wang Oishan, an energy initiative – a so-called “energy negotiation mechanism”. The first round of negotiations within this framework took place on Saturday in Beijing. There has been an inexplicable media blackout of the event, but Beijing finally decided to break the news. The government-owned China Daily admitted on Monday, “Both China and Russia kept silent on the details of the consensus they reached on energy cooperation in the first round of their negotiation in Beijing on the weekend.”

Without getting into details, China Daily merely took note of the talks as “a good beginning” and commented, “It seems that a shift of Russia’s energy export policy is under way. Russia might turn its eyes from the Western countries to the Asia-Pacific region … The cooperation in the energy sector is an issue of great significance for Sino-Russian relations … the political and geographic closeness of the two countries would put their energy cooperation under a safe umbrella and make it a win-win deal. China-Russia ties are at their best times … The two sides settled their lingering border disputes, held joint military exercises, and enjoyed rapidly increasing bilateral trade.”

It is unclear whether Gazprom’s agreements in Ashgabat and Sechin’s talks in Beijing were inter-related. Conceivably, they overlapped in so far as China had signed a long-term agreement with Turkmenistan whereby the latter would supply 30 billion cubic meters of gas to China annually for the 30-year period starting from 2009. The construction work on the gas pipeline leading from Turkmenistan to China’s Xinjiang Autonomous region has already begun. China had agreed on the price for Turkmen gas at $195 per thousand cubic meters. Now, the agreement in Ashgabat on Friday puts Gazprom in the driving seat for handling all of Turkmenistan’s gas exports, including to China.

Russia and China have a heavy agenda to discuss in energy cooperation far beyond the price of Turkmen gas supplies. But suffice it to say that Gazprom’s new stature as the sole buyer of Turkmen gas strengthens Russia’s hands in setting the price in the world gas (and oil) market. And that has implications for China. Moscow would be keen to ensure that Russian and Chinese interests are harmonized in Central Asia.

Besides, Russia is taking a renewed interest in the idea of a “gas cartel”. Medvedev referred to the idea during the visit of Venezuelan President Hugo Chavez to Moscow last week. The Russian newspaper Nezavisimaya Gazeta reported on Friday that “Moscow finds the idea of coordination of gas production and pricing policy with other gas exporters to be too tempting to abandon”. The daily quoted Miller as saying, “This forum of gas exporters will set up the global gas balance. It will give answers to the questions concerning when, where and how much gas should be produced.”

The agreements with Turkmenistan further consolidate Russia’s control of Central Asia’s gas exports. Gazprom recently offered to buy all of Azerbaijan’s gas at European prices. (Medvedev visited Baku on July 3-4.) Baku will study with keen interest the agreements signed in Ashgabat on Friday. The overall implications of these Russian moves are very serious for the US and EU campaign to get the Nabucco gas pipeline project going.

Nabucco, which would run from Turkey to Austria via Bulgaria, Rumania and Hungary, was hoping to tap Turkmen gas by linking Turkmenistan and Azerbaijan via a pipeline across the Caspian Sea that would be connected to the pipeline networks through the Caucasus to Turkey already existing, such as the Baku-Tbilisi-Ceyhan pipeline.

But with access denied to Turkmen gas, Nabucco’s viability becomes doubtful. And, without Nabucco, the entire US strategy of reducing Europe’s dependence on Russian energy supplies makes no sense. Therefore, Washington is faced with Hobson’s choice. Friday’s agreements in Ashgabat mean that Nabucco’s realization will now critically depend on gas supplies from the Middle East – Iran, in particular. Turkey is pursuing the idea of Iran supplying gas to Europe and has offered to mediate in the US-Iran standoff.

The geopolitics of energy makes strange bedfellows. Russia will be watching with anxiety the Turkish-Iranian-US tango. An understanding with Iran on gas pricing, production and market-sharing is vital for the success of Russia’s overall gas export strategy. But Tehran visualizes the Nabucco as its passport for integration with Europe. Again, Russia’s control of Turkmen gas cannot be to Tehran’s liking. Tehran had keenly pursed with Ashgabat the idea of evacuation of Turkmen gas to the world market via Iranian territory.

There must be deep frustration in Washington. In sum, Russia has greatly strengthened its standing as the principal gas supplier to Europe. It not only controls Central Asia’s gas exports but has ensured that gas from the region passes across Russia and not through the alternative trans-Caspian pipelines mooted by the US and EU. Also, a defining moment has come. The era of cheap gas is ending. Other gas exporters will cite the precedent of the price for Turkmen gas. European companies cannot match Gazprom’s muscle. Azerbaijan becomes a test case. Equally, Russia places itself in a commanding position to influence the price of gas in the world market. A gas cartel is surely in the making. The geopolitical implications are simply profound for the US.

Moreover, Russian oil and gas companies are now spreading their wings into Latin America, which has been the US’s traditional backyard. During Chavez’s visit to Moscow on July 22, three Russian energy companies – Gazprom, LUKoil and TNK-BP – signed agreements with the Venezuelan state-owned petroleum company PDVSA. They will replace the American oil giants ExxonMobil and ConocoPhillips in Venezuela.

At the signing ceremony, Medvedev said, “We have not only approved these agreements but have also decided to supervise their implementation.” Chavez responded, “I look forward to seeing all of you in Venezuela.”