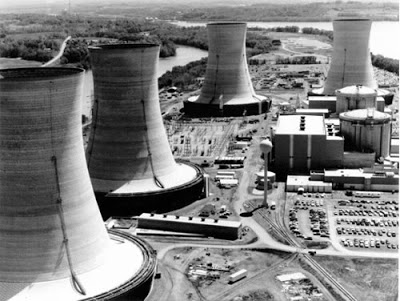 Thirty years after the Pennsylvania melt-down, a Soviet-style Iron Curtain has formed between the corporate media and the alternatives, with nuclear power at its center.

Chernobyl exploded and Three Mile Island missed by a whisker. They both killed people.

But thirty years after the Pennsylvania melt-down, a Soviet-style Iron Curtain has formed between the corporate media and the alternatives, with nuclear power at its center.

The Soviets denied for days that the Chernobyl accident had happened at all. America’s parallel corporate media says “no one died at TMI.”

Take National Public Radio’s Scott Simon. On March 28, Simon smirked on air that “no one was killed or injured” at Three Mile Island, “not so much as a sprained ankle.”

Except when people are fleeing them, as they did 30 years ago, radiation releases have never been linked directly to joint sprains.

But cancer, leukemia, birth defects, stillbirths, malformations, spontaneous abortions, skin lesions, hair loss, respiratory problems, sterility, nausea, cataracts, a metallic taste, premature aging, general loss of bodily function and more can be caused by radioactive emissions of the type that poured out of TMI. And all such ailments have been documented there OUTside the corporate media.

Simon and everyone else INside the corporate media missed the well-organized, well-executed press event in the statehouse at Harrisburg on March 26. Despite solid publicity from Eric Epstein and the long-standing Three Mile Island Alert, not a single corporate reporter covered presentations by nuclear engineer Arnie Gundersen and University of North Carolina epidemiologist Dr. Stephen Wing.

Once a top industry executive, Gundersen has shown that the containment at Three Mile Island Unit 2 did not completely hold, and that far more radiation was released than previously believed.

Gundersen and Wing were neither hiding nor alone. University of Pittsburgh radiology Professor Emeritus Dr. Ernest Sternglass and health researchers Joe Mangano and Jay Gould have long since documented that public health catastrophe. House-to-house surveys from local residents Jane Lee and Mary Osborne confirm the damage. Massive anecdotal evidence collected in a book and radio show by Robbie Leppzer appears at turningtide.com. Published in 1982 by DellDelta, KILLING OUR OWN correlated the death toll at TMI with that from other mis-uses of radiation. Other books have followed with similar conclusions.

This tidal wave of proof about the TMI death toll spread through the “alternative” media prior to the accident’s anniversary. Democracy Now!’s Amy Goodman and Juan Gonzales talked with me about it on March 27. Announced by the Institute for Public Accuracy, the story appeared on the Pacifica and Counterspin/Fair radio networks , and with Peter B. Collins on the Thomm Hartmann Show. It was also heard on stations such as WORT (Madison), KBOO (Oregon), KDKA (Pittsburgh), radioornot.com, and more. Websites like Huffington Post, CommonDreams, Alternet, FreePress.org, NukeFree, CounterPunch, BuzzFlash, Smirking Chimp, Daily Kos, and dozens more got the story out, as did environmental groups like Greenpeace, NIRS and Beyond Nuclear. (If your website, radio show or organization also carried it, please contact me).

But the word never crossed the conceptual chasm between the “mainstream” media and the “alternative.” Despite a federal class action lawsuit filed by 2400 Pennsylvania families claiming damages from the accident, despite at least $15 million quietly paid to parents of birth-defected children, despite three decades of official admissions that nobody knows how much radiation escaped from TMI, where it went or who it affected, not a mention of the fact that people might have been killed there made its way into a corporate report.

Nuclear opponents commemorated the day throughout the United States—most visibly at the gates of the plant itself—while Simon and others piously intoned that the opposition was dead and gone.

Simon concluded his 11-minute smarm by interviewing Dan Reicher from Google, whose “green” vision somehow includes new reactors. Not a peep was allowed from an epic grassroots No Nukes movement that has sustained itself nonstop (and nonviolently) since long before TMI melted, and is as strong as ever.

From the Associated Press and other corporate outlets, the parroted mantra that “nobody was killed” rang out as if a melt-down was no big deal, and turning a $900 million asset into a multi-billion-dollar liability was a “success story.”

Few assertions more clearly divide our parallel media universes than this one. Stolen elections and WMDs, corporate thievery and hemp/marijuana prohibition are all part of the Great Divide. But people (and animals) dying unreported in our most infamous industrial accident cut to the heart of our dis-informational dilemma.

Newspapers and TV networks are dying because they cannot attract advertisers because they are losing audience.

In some ways, we will miss them. But their self-interested omissions and deceptions have disemboweled their usefulness. Even the legendary CBS News anchor Walter Cronkite bought into the line that there was no danger of an explosion at TMI that week.

But in fact there was. Was the omission due to haste in a murky nightmare? A fear of causing panic? A fear of retribution from major sponsors? Or merely an unhealthy willingness to take the authorities at their word?

Whatever the case, the bad news is that the dominant media cannot handle this story and too many others like it. Millions of Americans are thus dangerously misinformed.

The good news is, there is new media—including wherever you’re now reading this—that WILL report it. And that’s growing stronger because it reports the truth to power.

Izvestia and Pravda are still being televised. But people did die at Three Mile Island. And it’s the “alternative” media that now brings reality to the mainstream.

[Harvey Wasserman edits NukeFree.org and is senior editor of FreePress.org, where this article originally appeared. His books, including SOLARTOPIA! OUR GREEN-POWERED EARTH, are available at harveywasserman.com.]