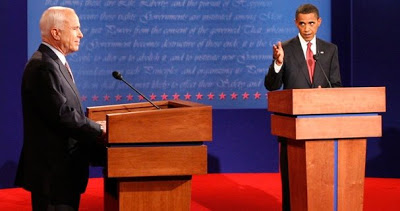 Debaters: Sen. Barack Obama (D), right, looks at Sen. John McCain as he makes a point Friday during the first US presidential debate, at the University of Mississippi in Oxford, Miss. Obama scored points but did he miss chances for a knockout punch? Photo by Jim Bourg / AP.

Obama ‘had two big chances to plant a large-caliber entry wound right between McCain’s eyes, and didn’t even try’

I was really, seriously impressed with Joe Biden and what he said in his interview with Olbermann. He was focused, on-point, accurate, everything I didn’t expect from him.

I was seriously underwhelmed by Obama and I hatehatehate saying that. I am old enough to have watched the first presidential debate, 48 years ago tonight, and I remember Kennedy looking cool and collected and Nixon covered with flop sweat. I only wish Obama had done the same. He had two big chances to plant a large-caliber entry wound right between McCain’s eyes, and didn’t even try.

First chance: McCain talks about how he’s so in favor of environmental legislation to deal with global warming. Obama mentions – without detail – the energy bill in Congress.

Here’s what Obama could have said:

“Senator McCain, back in June, we brought up the Lieberman-Warner Climate Security Act for a vote. It’s a bill presented by your good friend Joe Lieberman. An opportunity to set America on course to develop alternative energy, to establish the cap and trade system you say you favor, to take a big step toward energy independence and dealing with global warming. Your fellow Republicans in the Senate decided to filibuster that bill. We had a bipartisan majority to pass it. We needed 60 votes to cut off that filibuster. The vote was 59-40. There was one member of the Senate not present. You. Your one vote that day could have changed history. But you were afraid of upsetting your far-right base, the people who – like your Vice-Presidential nominee – don’t believe in global warming, as you say you do. Why did you do that, Senator McCain? And why do you lie to us now that you are strong on this issue when you avoided the opportunity to prove it?”

And then McCain gets into his sentimental “I’m a vet” bullshit and brings up the Great Vietnam Myth of the veteran who was spit on (it never happened, no one has ever found a single vet who can say “it happened to me”). McCain then went into talking about how “veterans can depend on me…”

Obama could have replied:

“Senator McCain, if you are such a strong supporter of veterans, why did you work to defeat the 21st Century GI Bill, which would improve benefits for our service members who have fought in Iraq and Afghanistan? Why did you offer amendments that would have wrecked it? And then – when it was clear there was a veto-proof bipartisan majority in support of it – why did you avoid voting on it? Where did you find the temerity to go and speak before veteran’s organizations like the American Legion and the Veterans of Foreign Wars, and claim that you supported the bill you didn’t support and worked to make it better when you worked to kill it? Why did you do that, Senator McCain? Why did you fail to support our troops and then lie to your fellow veterans?”

Trust me, with either one of those two torpedoes amidships, Wet-Start Johnny would have exploded, and America really would have seen “the real McCain.”

Myself, I vote this debate a wash because Obama didn’t take out McCain when he could have. I’m beginning to wonder if he actually has a political killer instinct, because I have yet to see it.

But it’s obvious that Biden is going to kill Palin, and the American people are going to look at that and say “we want her a heartbeat away from the presidency????” So McCain may lose the election as a result of the debate he isn’t in on.

“Submitted for your consideration…”