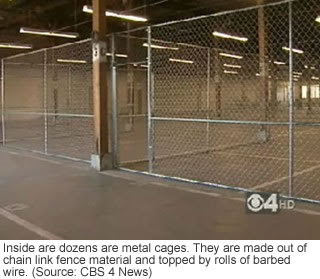 DENVER — The discovery of a makeshift jail in Denver’s warehouse district is causing outrage among some protesters.

The jail was apparently constructed to house protesters during the Democratic National Convention but the city never publicly announced plans to construct this kind of facility.

Members of the group Recreate ’68 are calling the detention center “Denver’s inhumane and dirty little secret,” “Guantanamo Bay on the Platte” or “Gitmo on the Platte.” The warehouse is just feet from the South Platte River.

The jail is made up of large fenced-in cages with razor wire on top. The city said those cages are for the safety of law enforcement agents and those who are arrested. Activists call it a concentration camp unfit and inappropriate for human detainees.

“We’re going to be locked in cages in the same building that they already said doesn’t have a safe fire suppression system,” said activist Glenn Spagnuolo.

“Some of us are calling this the dog pound,” said Mark Cohen, with Recreate ’68.

Clad in trench coats, bandannas and sunglasses, activists protested outside the detention center Friday in the driving rain. They are asking the city for a public explanation.

“We’re trying to shine the light on this little secret political prisoner camp that was being set up in the city of Denver,” said Spagnuolo.

“The community surrounding this is primarily poor, people of color, that live around here, who I am sure nobody asked before this was put here,” said activist Larry Hales.

Several protestors came with their faces concealed for fear of police retaliation.

“The idea is to protect ourselves from police profiling,” said Harold Maude.

The DNC is 10 days away, but it appears the clash of protesters and police has already begun.

The city said it is planning a public tour of the facility in the next few days.

Recreate ’68 is calling for the mayor’s office to shut down this facility before it even opens.