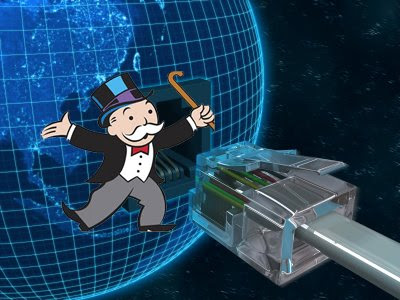 Here was what was supposed to happen: With telco-friendly Republican Congress members swept out of the way, Democrats would usher in legislation enshrining Network Neutrality principles and give the FCC the power to enforce them.

Here’s what happened (is happening) instead: The most powerful Net Neutrality supporters (Barack Obama, Hillary Clinton) are kicked upstairs while cable-and-Hollywood-friendly Democrats are killing Network Neutrality legislation in committees.

Meanwhile, both telecom and cable companies are emboldened by the legislation’s quiet death, the deafening sound of non-action covered up nicely by the economic crisis, and both industries are soothed by interim FCC commissioner Michael Copps’ toothless proposal for a fifth unenforceable principle regarding network discrimination.

The Democrat rope-a-dope strategy of the last few years is coming back around to kill Net Neutrality. The initial plan was simply to let Republicans have enough rope to hang themselves. Congressional Democrats ignored calls for investigations and impeachment of members of the Bush Administration because doing so allowed them to drop all blame square on their opponents’ shoulders for everything without putting themselves under undue scrutiny. A few years of doing absolutely nothing was tantamount to lying low while Republicans destroyed themselves so Democrats could take over. . . and continue to do nothing.

It’s a genius plan until people start watching and learning about the new bosses and start understanding how much they look like the old bosses. The Internet Freedom and Preservation Act of 2006, 2007, 2008? All killed by assassins with supposedly opposing goals.

The Senate version is suspicously stuck in a committee of formerly staunch proponents. The House version is under the committee supervision of net neutrality opponent Joe Barton (R-TX) and Henry Waxman (D-CA), who represents West Hollywood and Beverly Hills.

We’re not surprised by Barton, a Texas Republican funded by Comcast and AT&T — that’s historical par for the course. But Waxman’s a Democrat, and Democrats are supposedly pro-net neutrality. Meanwhile, we should also be surprised by Dianne Feinstein’s (D-CA) lame and failed attempt to sneak in “reasonable network management” provisions into the economic stimulus package as Waxman looked the other way.

So what’s going on with our supposed neutral net champions? The answer lies in the other industries opposed to net neutrality, namely the Entertainment industry, the principals of which happen to live in Waxman’s and Feinstein’s districts and donate heavily to their campaigns. Waxman gets lots of money from the cable industry, including TimeWarner and Disney. Feinstein’s donors include Time Warner and Disney as well, but also Qualcomm and GE (which owns NBC).

In the earlier days of the Net Neutrality debate, the argument centered on very technical issues lost on the general public and focused heavily on telecommunications companies like Verizon and AT&T, and some on Comcast. (Though Ted Stevens famously issued a net neutrality push poll asking constituents if they wanted more TV or less TV.)

As it progresses it becomes less about network issues (as if it ever really was about network issues) and more about Web video. Right now, very large, very wealthy, very powerful entities are battling for control of what will become the new TV (and radio and newspaper). It’s not about bandwidth or network operation. It’s about controlling Web media, especially video.

Recently we learned from the CEO of a cable company who says American cable providers won’t allow speeds they’re capable of delivering because they’re afraid people will cancel their cable TV subscriptions. TimeWarner, a maker of films and television content as well as a cable Internet and TV provider, is toeing the line with download caps limiting how much video consumers can download.

AT&T on the other side, quietly updated its terms of wireless service to prevent video transfers. AT&T, of course, is also getting into the video content delivery game with its U-Verse. Despite these most recent instances loudly protested, legislators have cited lack of complaints of abuse as the reason why they’ve backed off. Even former neutral net proponent John Conyers (D-MI) suddenly thinks it’s a non-issue. It’d be nice if we could look at his top donors and not see AT&T, TimeWarner, Sprint, and Cable, but sure enough, there they are, as predictable as the sunset.

You might have also noticed, like we have, that while anything the RIAA and the MPAA want goes right through Congress like crap through a goose, network neutrality legislation (wanted by the people who currently have no money) languishes and dies in committee.

With a setup like this, good luck getting net neutrality legislation passed this year or the next. Maybe in 2010 the country will suddenly favor independents and third parties so the do-nothing bums still remaining will be thrown out. But that may be overly optimistic—the people will likely still be broke by then, and its money that wins elections, and apparently what runs Congress.