Dems Are Complicit If They Don’t Prosecute

Read the Nuremburg Principles !! The Democrats and anyone who is unwilling to condemn and prosecute those responsible for what has happened at US hands are complicit in the crime. Give us justice, you immoral cretins politicians !! 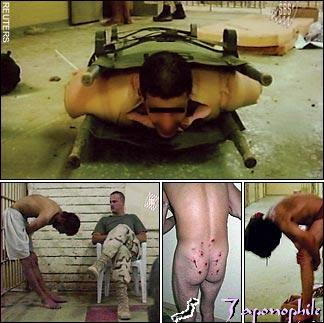 Despite now overwhelming evidence that ex-President George W. Bush and many top aides engaged in a systematic policy of illegal torture, national Democrats appear to be shying away from their recommendation last year for a special prosecutor to investigate these apparent war crimes.

Last June, House Judiciary Committee Chairman John Conyers and 55 other congressional Democrats signed a letter to then-Attorney General Michael Mukasey demanding a special prosecutor to investigate the growing body of evidence that Bush administration officials had sanctioned torture, which had been documented by the International Committee of the Red Cross.

Not unexpectedly, Mukasey — a staunch defender of Bush’s theories about expansive presidential powers — ignored the letter. Now, however, despite even more evidence of torture and a Democratic administration in place, the calls for a special prosecutor have grown muted.

Aides to several Democratic lawmakers who signed the June 2008 letter told me that the focus has shifted to the economy and that pressure for a special prosecutor to bring criminal charges over the Bush administration’s past actions could become a distraction to that focus.

They added that the most that now can be expected is either a “blue ribbon” investigative panel such as Conyers proposed earlier this year or a similar “truth and reconciliation commission” as advocated by Senate Judiciary Committee Chairman Patrick Leahy. Not a single signer of last year’s letter has stepped forward to renew the demand for a special prosecutor to the Obama administration and Attorney General Eric Holder.

The loss of Democratic interest in a special prosecutor suggests that the signers made the recommendation last year knowing that Mukasey would ignore it but thinking that the letter would appease the Democratic “base,” which was calling for accountability on Bush’s war crimes.

This readiness of Democrats to put the pursuit of bipartisanship over the pursuit of justice — after a victorious election – parallels their actions 16 years ago when President Bill Clinton and a Democratic-controlled Congress swept under the rug investigations of the Reagan-Bush-41 era, such as the Iran-Contra scandal and Iraqgate support for Saddam Hussein. [See Robert Parry’s Secrecy & Privilege.]

However, this time, Bush-43’s apparent violations of international laws prohibiting torture are forcing global demands for action, if the United States fails to live up to its obligations to enforce its own commitment to anti-torture laws and treaties.

Torture is a war crime that carries universal enforcement, which means that prosecutors of other nations can bring charges if the nation directly implicated doesn’t act. In that regard, Spanish investigative judge Baltasar Garzon took the initial steps last week to investigate whether six high-level Bush officials, including key lawyers John Yoo and Jay Bybee, violated laws against torture.

Also, over the weekend, the Washington Post reported that the waterboarding — or simulated drowning — of “war on terror” suspect Abu Zabaida induced him to provide a host of new leads about al-Qaeda plots, but that his torture-induced claims turned out to be time-consuming dead-ends.

“Not a single significant plot was foiled as a result of Abu Zubaida’s tortured confessions, according to former senior government officials who closely followed the interrogations,” the Post reported.

“Nearly all of the leads attained through the harsh measures quickly evaporated, while most of the useful information from Abu Zubaida — chiefly names of al-Qaeda members and associates — was obtained before waterboarding was introduced, they said.” [Washington Post, March 29, 2009]

Two weeks ago, other evidence about Bush’s torture policy surfaced when journalist Mark Danner published chilling details from a report by the International Committee of the Red Cross that concluded that the abuse of 14 “high-value” detainees at CIA secret prisons “constituted torture.”

“In addition, many other elements of the ill treatment, either singly or in combination, constituted cruel, inhuman or degrading treatment,” according to the ICRC report cited by Danner. Since the ICRC’s responsibilities involve ensuring compliance with the Geneva Conventions and supervising the treatment of prisoners of war, the organization’s findings have legal consequence.

The June 2008 letter from Conyers apparently was prompted by the same or similar ICRC findings, citing “several instances of acts of torture against detainees, including soaking a prisoner’s hand in alcohol and lighting it on fire, subjecting a prisoner to sexual abuse and forcing a prisoner to eat a baseball.”

Conyers and the other Democrats told Mukasey then that the ICRC findings alone warranted action but were buttressed by other information that senior Bush administration officials met in the White House to approve the use of waterboarding and other “enhanced techniques” and that “President Bush was aware of, and approved of the meetings taking place.”

The letter added: “This information indicates that the Bush administration may have systematically implemented, from the top down, detainee interrogation policies that constitute torture or otherwise violate the law.

“We believe that these serious and significant revelations warrant an immediate investigation to determine whether actions taken by the President, his Cabinet, and other Administration officials are in violation of the War Crimes Act, the Anti-Torture Act, and other U.S. and international laws.

“Despite the seriousness of the evidence, the Justice Department has brought prosecution against only one civilian for an interrogation-related crime. Given that record, we believe it is necessary to appoint a special counsel in order to ensure that a thorough and impartial investigation occurs.”

Nearly nine months have passed since Conyers and the other Democratic lawmakers sent the letter to Mukasey. Since then, more evidence has piled up implicating at least a dozen senior Bush administration officials in sanctioning a policy of torture.

For instance, in January, Susan Crawford, the retired judge who heads military commissions at Guantanamo, became the highest ranking U.S. official who said the interrogation of at least one detainee at Guantanamo met the legal definition of torture and as a result she would not allow a war crimes tribunal against him to proceed.

Last week, Vijay Padmanabhan, the State Department’s chief counsel on Guantanamo litigation, told the Associated Press that the Bush administration overreacted after 9/11 and set up a policy of torture at the facility.

“I think Guantanamo was one of the worst overreactions of the Bush administration,” Padmanabhan told the AP. He criticized other “overreactions” such as extraordinary renditions, waterboarding at secret CIA prisons and “other enhanced interrogation techniques that would constitute torture.”

Meanwhile, other Bush administration veterans, including Vice President Dick Cheney, have spoken openly about their support for and approval of waterboarding and other brutal interrogation methods, although they continued to insist that the tactics did not constitute torture.

“The point that ought to be understood is that throwing a term around recklessly for its emotional content doesn’t really get you anywhere.”

In waterboarding, a person is strapped to a board with his head tilted downward and a cloth covering his face. Water is then poured over the cloth forcing the panicked gag reflex associated with drowning. It has been condemned as torture since the days of the Spanish Inquisition and its use has resulted in past criminal prosecutions under U.S. law.

Before leaving office, Vice President Cheney said he approved waterboarding on at least three “high value” detainees and the “enhanced interrogation” of 33 other prisoners. President Bush made a somewhat vaguer acknowledgement of authorizing these techniques.

Civil rights groups said Bush and Cheney’s comments amounted to an admission of war crimes. The ACLU called on Attorney General Holder two weeks ago to appoint a special prosecutor to launch a probe into the Bush administration’s torture practices.

“The fact that such crimes have been committed can no longer be doubted or debated, nor can the need for an independent prosecutor be ignored by a new Justice Department committed to restoring the rule of law,” ACLU Executive Director Anthony Romero said.

“Given the increasing evidence of deliberate and widespread use of torture and abuse, and that such conduct was the predictable result of policy changes made at the highest levels of government, an independent prosecutor is clearly in the public interest,” Romero said.

Holder has not responded to the ACLU’s request. Over the next several weeks, however, the evidence of torture should continue to mount.

The Senate Armed Services Committee is expected to release a voluminous report on the treatment of alleged terrorist detainees held in U.S. custody and the brutal interrogation techniques they were subjected to, according to Defense Department and intelligence sources.

The declassified version of the report is 200 pages, contains 2,000 footnotes, and will reveal a wealth of new information about the genesis of the Bush administration’s interrogation policies, according to these sources. The investigation relied upon the testimony of 70 people, generated 38,000 pages of documents, and took 18 months to complete.

The Justice Department also is expected to release a declassified version of a critical report prepared by its Office of Professional Responsibility, which investigated legal work by former attorneys at the Office of Legal Counsel, which advises the White House on the limits of presidential authority.

The report concluded that three key attorneys — John Yoo, Jay Bybee and Steven Bradbury — blurred the lines between an attorney charged with providing independent legal advice to the White House and a policy advocate who was working to advance the administration’s goals, which included a legal justification for torture, said the sources who spoke on condition of anonymity because the contents of the report are still classified.

On April 2, the Justice Department also is expected to release three still-classified legal opinions that Bradbury wrote in May 2005, reaffirming Bush’s claimed authority to subject “war on terror” prisoners to harsh interrogations.

[Jason Leopold is an investigative reporter and a two-time winner of the Project Censored award. He is the author of the National Bestseller, News Junkie, a memoir, and he has launched a new online investigative news magazine, The Public Record.]

2 Responses to Dems Are Complicit If They Don’t Prosecute