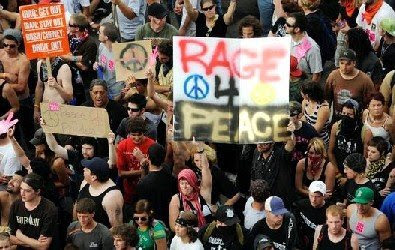 I start the day early loading leaflets and joining Leslie Cagan, Judith LeBlanc and five other United for Peace and Justice volunteers headed to the Denver Coliseum on the North Side of town before 9:00 am.

We’re going to the ‘Rage Against the Machine’ benefit for Iraq Veterans Against the War, organized by the Tent State kids and their allies, and we’re expecting about 10,000 young people. It’s a beautiful day-sunny, not too hot, blue skies with a few clouds, and the first range of the Rockies clear on the horizon. The concert is to be followed by a mass march to the Pepsi Center, led by the vets, to press their antiwar demands on the Democrats. Since there’s no permit, and the Pepsi Center is restricted with ‘protest pens’ no one intends to enter, there’s a sense of tension in the air.

Our UFPJ leaflet has a simple message: Join us Sept. 20 to knock on a million doors for peace. Get signatures on petitions, get to know your neighbors, get outside your ‘comfort zones’ into new neighborhoods and help us double the size of our movement with new names, addresses and emails.

Since the lines are long and organized, we quickly get out thousands of flyers. A brief rap, and most people say, ‘Oh, this is cool. I can do this.’ Some don’t want to be bothered, interested only in the bands, and a few kids are rather spaced out early since no intoxicants other than the music are permitted on the grounds.

I get a ‘workfare’ pass into the concert with terrific seats. This means I’m on the security team for IVAW inside the concert and along the line of march. We get our special chartreuse armbands and blue wristbands, a quick training in nonviolent methods in dealing with problems. Then we’re into the cavernous space, with a local Denver band, Flobots, which is decidedly left and high-energy hip-hop. IVAW speakers appear between numbers and keep the politics of the day clear and focused.

They have three demands: ‘Out Now,’ full benefits for returning vets, and reparations for Iraq. They have no great love for the Democrats who keep voting to fund the war, they’re angry with Obama for not taking a harder line, but they see McCain as more dangerous, both to the world and to vets. They want militancy, but they insist on nonviolence for the day, and demand a resolute respect for their leadership and ground rules.

When “Rage” comes on the stage and gets itself and the crowd wound up, one thing becomes crystal clear. If you’re interested in radical and democratic social change from below, here is one powerful engine for it. You dismiss, ignore or demoralize the high energy and critical force of these young people at your peril. This is a multiclass, multinational force of youth, and on this day, they are accepting the lead of the working class, even if it’s taking the form of the politics, militancy, organization and discipline of the Iraq vets.

The beautiful thing is how well it all worked.

The vets marched in formation with cadence at the front, dozens of them in uniform, some in full dress with a chest full of medals. They wanted us to keep a short space for media behind them, then everyone else another few yards back behind a large banner supporting GI resistance to the war. No breakaways and no nonsense. If arrest situations came up, we had our instructions on how to keep those who didn’t want to risk arrest still involved, but out of the immediate reach of the police.

I’d guess that at least two-thirds of the 10,000 Rage fans joined us, then we picked up other youth, a few workers, and even Convention delegates along the way. The banners and signs and costume were colorful, the chants imaginative and militant, and the energy infected everyone, even the crowds of bystanders, many of whom broke into applause.

I had one of the harder jobs, keeping people from breaking the front ranks and jumping the banner. But with the vets leadership, we kept the spirit both upbeat and disciplined. Denver’s overkill police presence was everywhere, but everything remained civil. Some even felt some sympathy for them, sweltering on a hot sunny day in their new Black Ninja Turtle outfits, which must have been unbearable.

It was a long march, nearly five miles. One problem was keeping everyone hydrated, but cases of water kept showing up at critical points. The best energy was downtown Denver, with the cheering and applause from Convention delegates. But we all knew there were trouble spots ahead.

Denver’s security rules meant you couldn’t get closer to the Pepsi center than several hundred yards, and then you were to be put in fenced ‘protest pens.’

The vets would have none of it. They hadn’t risked their lives, supposedly defending the Constitution, to be treated this way. They were going to march until they were stopped and then we’d seen what would happen. As we got closer to the skirmish line, they stopped several times, and the vets took turns giving heart-rending stories to the press, which, by this time, was everywhere, and driving us nuts trying to keep them to respect our lines and discipline.

At the final stopping point, a decorated Marine told the cops they would get no violence from us, and we expected none from them. The three demands were read to Obama’s campaign and the Democratic Party. The vets demanded a response, and were determined to wait for one.

So now we had the problem of keeping thousands of people, encircled by police and barricades, in an upbeat, but patient and calm state of mind.

One young Black kid from Denver of our security team rose to the occasion. He starts doing his raps, and those of others as well. The crowd loves it, especially when he gets on their case for not being too good at ‘call and response.’ So he starts an on-the-spot workshop on how we can all become better rappers.

Next two young African American women start softly singing an old church-based civil rights song ‘Those Who Love Freedom…” The lyrics are simple and lyrical, and soon hundreds are singing it, over and over. For me, powerful memories come up from my days on Freedom Marches in Mississippi, when we sang this same song in the face of the Klan and cops. When I start to sing along, my eyes fill with tears from long-buried emotions. To hell with it, I decide, let the tears flow, and I sing along.

Finally, we get the word. The other side blinked. The Obama campaign’s top veterans affairs people ask the Vets to send two reps into the Pepsi center to discuss their demands. Moreover, they want an ongoing series of discussions to make sure all veterans concerns are heard and dealt with. That’s enough for IVAW to call a victory, even if a partial one, and work out a way to bring the day to a close. It’s decided that we part the crowd down the middle, opening a path. The vets do an about face, march in formation though the crowd, and as they pass, to many cheers, we fall in behind, get back to the downtown area, and go our various ways.

I find a way to get to my car, then back to ‘tent city’ to secure our display in preparations for leaving. I meet up with my team in a Taco joint, where they, along with some of the new media people working with Laura Flanders, are watching Joe Biden’s speech. I’ll have to read it tomorrow, because given everything we’ve been through, right now it seems rather trivial.