Detroit Bailout : We Can Save Capitalism But We Can’t Tell it to Behave 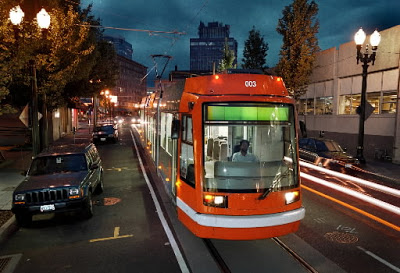 Streetcar in Portland: Detroit killed the streetcar system. Photo by Steven Nehl / The Oregonian.
‘We need government to chain down capitalism and set up rules that force it to start using its innovative powers for the public benefit.’
By Roger Baker / The Rag Blog / November 19, 2008

I sort of focus on transportation, energy, and economics and obviously have strong opinions on related issues.

The thread of continuity running through current government policy is that (A) we have the responsibility to save capitalism like in Detroit but (B) we have no right to dictate the rules for how capitalists must behave — now that they have nearly run the UKS whole US industrial system into the ground.

That thinking is absurd; we provide the money and we have every right to call the tunes to prevent even greater disasters.

As for Detroit, they killed the streetcar system to the point that I hear there is only ONE manufacturer still building light rail cars in the whole USA (Siemens in California), and they are way overbooked on orders.

If Detroit built tanks and bombers during WWIII, it can certainly refocus on what most transpo experts agree we now need — a strong rail program to deal with global warming and peak oil. Just because the oil price has suddenly collapsed due to a world recession does not mean that world oil production won’t continue to decline and soon enough leave us in even worse shape.

We need government to chain down capitalism and set up rules that force it to start using its innovative powers for the public benefit, rather than enslaving us to the demands of what has become what James Galbraith calls a “Predator State”.

In other words, we need to demand DEEP CHANGE in our government philosophy, away from privatization, based on public need and expert opinion unsullied by special interest influence.

Will Obama challenge capitalism even as much as FDR? We don’t know yet. We only know that our very survival depends on him doing so. We need to demand that public control needs to replace the greed and anarchy of a system that has spun out of control, and has indeed invented numerous tricks and tactics to shield itself from democratic control (try fighting the Texas road lobby and you’ll see what I mean).

1 Response to Detroit Bailout : We Can Save Capitalism But We Can’t Tell it to Behave