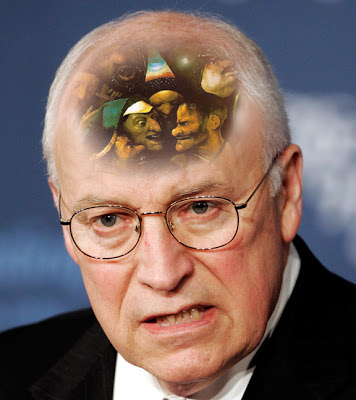 Graphic by Larry Ray / The Rag Blog. (Thanks to Hieronymus Bosch for the look into Dick’s Dark Brain.)

Dick Cheney is sadly childlike in his petulant public outbursts. There is a mad gleam in his eye as he insists that his fantasy world and imagined demons are real.

And his madness has recently been on public display wherever he can manage a TV interview.

Dick Cheney is sadly childlike in his petulant public outbursts. There is a mad gleam in his eye as he insists that his fantasy world and imagined demons are real. He is both the raving old uncle bursting into the room, ranting wildly and an overindulged child throwing a tantrum, kicking and screaming on the floor.

Cheney is still fuming that W resolutely refused to pardon his former chief of staff, I. Lewis “Scooter” Libby Jr., who was convicted of several federal counts including perjury for his part in leaking the identity of former CIA agent, Valerie Wilson. Cheney will reportedly be a no-show at a Bush gathering next week of the old administration faithful including Condoleezza Rice, Karen Hughes, Dan Bartlett and other loyal insiders.

That George W. Bush would stand up to him in a heated argument during the last hours of their administration remains a stinging, maddening affront and personal defeat to Cheney, the consummate controller. His reluctance to quietly retire after imposing incalculable damage upon this country really should come as no surprise as we look back at his past.

Cheney began his political career in 1969 as an intern for Wisconsin Congressman William A. Steiger. The fall of Richard Nixon and Gerald Ford’s assumption of the presidency inadvertently opened the doors to the White House to Cheney.

Ford chose wunderkind and Nixon cabinet member, Donald Rumsfeld, to help him regain control of a White House in disorder and crisis. On his tapes, Nixon said of Rumsfeld, “at least Rummy is tough enough” and, “He’s a ruthless little bastard. You can be sure of that.”

The bureaucratically saavy Rumsfeld tapped by then Wyoming Congressman Dick Cheney, as his deputy. Early on, Cheney was characterized by insiders for “making himself valuable by initially doing the lowest forms of bureaucratic scutwork.”

Rolling Stone Magazine succinctly described the Rumsfeld-Cheney power grabbing cabal: “Having turned Ford into their instrument, Rumsfeld and Cheney staged a palace coup. They pushed Ford to fire Defense Secretary James Schlesinger, tell Vice President Nelson Rockefeller to look for another job, and remove Henry Kissinger from his post as national security adviser. Rumsfeld was named secretary of defense, and Cheney became chief of staff to the president. The Yale dropout and draft dodger was, at the age of 34, the second-most-powerful man in the White House.”

After years of steadily parlaying his political power, in 1993 Cheney left Washington and the Defense Department after the Democrats returned to power under Bill Clinton. Cheney joined The American Enterprise Institute and in 1995 until 2000 the career politician became CEO of energy sector giant, Haliburton. In those five years, before returning to politics, Cheney’s net worth was estimated to be between $30 million and $100 million, and said to be largely derived from his position at Haliburton. This was in addition to his gross income of nearly $8.82 million. Not bad for a Yale dropout who eventually earned both a BA and MA in political science.

The world is generally very familiar with Cheney’s transformation in 2000, of the basically powerless office of Vice President of the George W. Bush administration into a secretive Dr. Strangelove operation. The Washington Post noted, “Across the board, the vice president’s office goes to unusual lengths to avoid transparency. Cheney declines to disclose the names or even the size of his staff, generally releases no public calendar, and ordered the Secret Service to destroy his visitor logs. His general counsel has asserted that ‘the vice presidency is a unique office that is neither a part of the executive branch nor a part of the legislative branch,’ and is therefore exempt from rules governing either.”

He did not leave office gracefully, being confined to a wheelchair following a fall. His image is forever burned into our memory as he was wheeled into his place at the Obama Inauguration, bundled up in a lap blanket, dressed in black, and wearing a dark fedora. An image of physical defeat, and dour reluctance to acknowledge that the nation was overwhelmingly, joyfully welcoming in a new era of change, openness and rejection of everything he stands for.

Cheney is sadly like a modern-day Norma Desmond substituting Pennsylvania Avenue for Sunset Boulevard. An over-the-hill, discredited political actor who may be ready for his closeup, but does not realize that it would be in High Definition today, showing all his warts and madness in more detail than anyone wants to see. Like Norma, Dick is better remembered silent. He now must head back, deep into the hills of Wyoming and let America get on with its business.