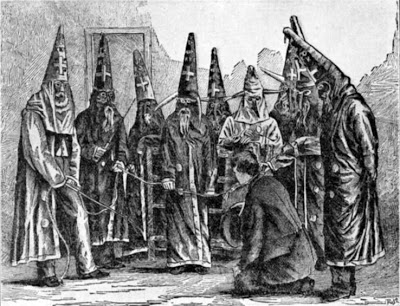 Costumed Klansmen plying their trade. Image from University of North Carolina.
The true story:
David Crockett and the KKK in San Antonio

During a bout of recent microfilm reading in the pages of an old and obscure newspaper, I discovered who killed Davy Crockett and how he died. The story reporting it is below. Perhaps history buffs in San Antonio will be able to help me flesh out this startling Texana find:

SAN ANTONIO, Tex.—David Crockett, 24 year-old jobless white worker, is believed to have been “done away with” by Klansmen, following his disappearance and the finding of his bullet-shattered automobile.

“Warning. We are certain you raised the Ku Klux Klan issue in this campaign,” said a note he received the day before his disappearance. “If you want to remain in good health, tend to your own private business and leave us alone.” The note was signed “K.K.K.”

The issue of the right of Negroes to vote in the Democratic primary has again been raised in this present campaign, with many demanding this right following a U.S. supreme court decision supporting upholding it. Negroes are, nevertheless, still barred from the primaries and the Texas supreme court has upheld this rule.

The trick of this story is revealed in its headline: “K.K.K. ‘Gets’ White Texan.” It is from the Sept. 1934 of the Southern Worker, a newspaper published by the Communist Party in Birmingham, Ala.

It leaves much untold. Who was this David Crockett? A city directory would tell us, and so, too, might copies of the July or August issues of the “boss” dailies in San Antonio. (I am not in Texas. If anyone wants to volunteer to do the library work, I’d be much obliged.)

Maybe David Crockett, the one mentioned here, ought to be a hero for the Left in Texas!

[Dick J. Reavis, a contributor to the original Rag, is a professor in the English department at North Carolina State University. He can be reached at dickjreavis@yahoo.com .]