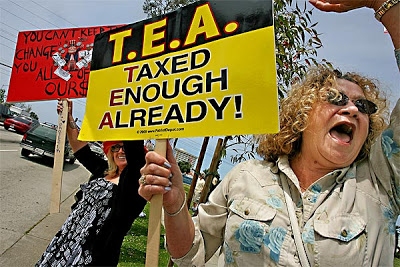 A Tea Party take on the economy. Photo from the Los Angeles Times.
The shifting currents of
Our political economy

Marx used to refer to what we now call the “economy” as “the political economy,” because he realized that economics is really built on the constantly shifting social foundation of culture and politics, and law derived from politics. The latter factor sets the rules and laws for the marketplace to follow. There is no better current proof of the reality of this point of view than the example of the stock dividend take-back that was forced onto BP.

Now it looks like the rules of acceptable economic behavior may be shifting. In this context, maybe Obama should be seen as the political product of the times we are living in, and not as the bold source of change that some had hoped that he would be. Obama was chosen as a leader during a time when a frightened U.S. public wanted to secure and restore and prolong the previously happy economic times of the Greenspan-era long credit bubble expansion.

When times get hard, and when government policies seem ineffective, the populace tends to become angrier and to seek out stronger medicine, usually by demanding a stronger, bolder leader of some kind. In the absence of tangible reform coming from current Democratic Party control, the Tea Party sentiment is dynamic and growing as a sort of a backlash. Here is a rather good social analysis of its internal contradictions.

The Tea Party supporters commonly want the government to stop spending and increasing what they see as their future tax obligations. However, the facts argue that without the current rapidly growing federal deficit, the U.S. economy would fall flat on its face. As we have recently heard, almost all the most recent jobs growth was due to temporary government census jobs, whereas very few jobs were created by private sector investment.

I suspect that many of the Tea Party supporters do not oppose government spending per se, so much as they oppose the current corporate-pandering pattern of public spending, which certainly has various class favoritism implications. To me it looks like an angry, screwed middle class lashing out at a dysfunctional government that is deeply resistant to reform, but thought more likely to lean on the poor than the wealthy when put under pressure.

There is no end to the need for sensible federal government reforms. We should applaud the part of the Tea Party sentiment that is genuinely opposed to the burden of corporate welfare policies that block cost reform. We can decide to disagree on whether we need to spend what we save on corporate welfare for desperately needed emergency shelter, food stamps, and lifeline social services. It is the guys at the top that mostly caused the problem, not the largely minority jobless population at the bottom.

As Monbiot says, there are deep contradictions built into these angry and hard-to-predict political movements. The “drill baby drill” crowd is being forced to confront the naked corporate profit motives of BP in the Gulf (while the environmental policies there might not be as bad as for production in Venezuela or the Nigerian Delta).

Let us shift to the big picture and what might keep the Tea Party and the rest of the U.S. public unhappy, and thus U.S. politics unsettled. Prudent Bear‘s Doug Noland is a fine economic analyst in terms of knowing which official numbers to focus on and where to find them, which is nowadays perhaps the most important skill of a good independent (and properly skeptical) economist.

Here I have cherry-picked a few snips from his recent essay that cite some of the key numbers at the heart of his argument:

…In only 21 months (seven quarters), outstanding federal debt increased $3.274 trillion or, 48.9%, to $9.971 trillion. Over this period, federal debt growth has been running at an unprecedented rate of about 13% of gross domestic product (GDP). As a percentage of annual GDP, federal debt jumped from 46% to 68% in only seven quarters. Of course, the amount of outstanding debt is dwarfed by the federal government’s massive contingent liabilities (ie future healthcare, social security and pension obligations). There is, as well, the festering issue of the government-sponsored enterprises (GSEs)… Massive fiscal stimulus has succeeded — for now — in stabilizing national incomes (and spending!)…

Massive federal borrowings have sustained U.S. financial and economic recoveries. These recoveries have bolstered acutely vulnerable state and local finances. So far, (over-liquefied and speculative) markets have accommodated the ongoing accumulation of government debt at quite low interest rates. Some have compared US governmental finances with those of Greece, while others have dismissed such talk as ludicrous. It is fair to say that the U.S. system has built — and continues to build — enormous risk to rising market yields and/or debt market disruption. I would argue that this risk is more dangerous than previous bubble vulnerabilities to mortgage credit disruptions — risks identifiable during those bubble years right there in the Fed’s “flow of funds” credit data…

What is ultimately at issue here is whether the current classic Keynesian approach of massive and increasing U.S. stimulus spending can restart the engine of private business job growth here in the USA, or elsewhere. The current signs are not very good. There are few signs of U.S. private business expansion yet, for the simple and logical reason that betting on a solid non-inflationary economic recovery does not now look like a smart long range investment risk to take. Peak oil adds doubt.

Wallerstein recently (and as usual) describes the situation plainly. Here he points out that the world’s nations are in essentially lurching from cure to cure in search of economic relief, confronted with rising debt and lower private growth and profits:

Impossible choices in a world depression
By Immanuel Wallerstein / June 15, 2010

So, what can the states do? They are trying one thing today, and another thing tomorrow. Last year, it was stimulus. This year, it’s debt reduction. The year after, it will be taxation. In any case, the overall situation will be worse and worse…

The way out of all of this is not some small adjustment here or there — whether of the monetarist or the Keynesian variety. To emerge from the economic box in which the world finds itself requires a fundamental overhaul of the world-system. This will surely have to come, but how soon?

Who has the vision to see what productive U.S. investments, even the obviously needed ones in energy, are profitable over a 10-year time frame, given this unpredictable global investment climate? The current investment climate uncertainty is enough to challenge Warren Buffett and the others.

The bankers, who largely get to decide what happens, can see that most U.S. investment in the production of real consumer goods is risky in the context of a global crisis, and with a debt-ridden, aging U.S. population as investment security. There remains the impossible-to-meet Chinese price competition in producing consumer goods. This means that the dollar must surely shrink in value against the yuan; the best we can probably anticipate from this is a soft landing transition to a lower standard of living for U.S. consumers.

For now, the U.S. government keeps printing and lending, although a big renewed expansion of federal stimulus is in doubt because of the politics. All the while, the top officials in the U.S. government must know that the game has to end at some point, and that interest rates must rise to reflect the true investment risk, and that the dollar must be devalued.

This increasing instability will probably have to become known through some unpredictable event like Greece, panicking an already edgy global finance market. All we can say for sure is that the current policies are making things continually less stable, and encouraging an outcome of that kind.

5 Responses to Roger Baker : Karl Marx, the Tea Party, and our Political Economy