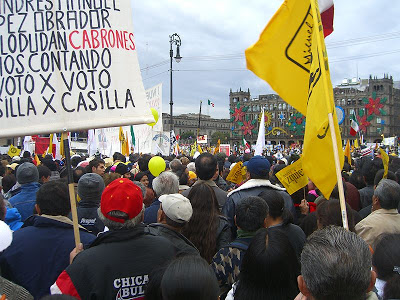 The widespread demonstrations that have taken place since September 17, when “Occupy Wall Street” began, deserve a better generic name than “occupations.” After all, in American English at the moment, “occupation” is not a felicitous term. It usually refers to a spot in the labor force — and today that may connote a suspect privilege — or worse, the actions of the United States in Iraq or Afghanistan. Nobody wants to be an “occupier.”

Furthermore, we do not say, or want to say, “I spent two hours at the occupation today.” Instead, New Yorkers say, “I spent two hours at Liberty Square today,” unless they are policemen, who prefer “I surveilled Zuccotti Park today.” Elsewhere, most people say they were at “the Capitol” or “City Hall.” These words are too localized for generic use.

Our Mexican neighbors have been staging protest campouts for more than 50 years. In 2006 thousands of them raised tents and kitchens in the Zócalo, Mexico City’s main plaza, for two months in protest of vote fraud that denied leftist presidential candidate Andrés Miguel López Obrador a victory.

The era is long past when Americans had little choice but borrow words from the Athenians, Romans, French, or Germans. Mexicans are now our same-street, next-door neighbors and sometimes our kin — or us — and their term for a protest campout that lasts for day is un plantón (Plaahn-TONE). We should adopt it.

My Larousse dictionary says that un plantón is “a group of people who congregate and stay a certain time in a public place to protest or make demands.” In popular usage, el plantón is the generic site where they gather. The word is derived from the reflexive verb plantarse, which the Larousse dictionary defines as “to stand firm in one place,” as in, “She planted herself in the doorway and wouldn’t let anybody pass.”

What this means to us is that we should be able to say, “I spent two hours at the plantón this morning.” 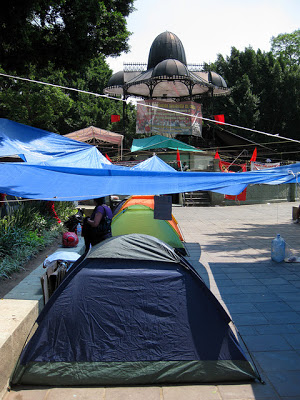 The makings of a plantón. Image from Oaxaca: The Year After.
But even the Mexicans, with their long and essentially tragic history of protest, have not perfected protest terminology. They generally call people who attend plantones “manifestantes,” a term that is transparent even in English, but does not distinguish between ordinary demonstrators and those who overnight in a square or on a capitol grounds — or advocate doing as much.

Most Americans are familiar with the term “Sandinistas” to denote disciples of the Nicaraguan rebel Augusto Sandino. A few years ago, we even coined the term ‘Clintonistas’ to refer to minions of a president. Mexicans haven’t adopted a specific term for people who take part in or advocate plantones, but following the logic of their language, we can coin a derivative which maybe they’ll borrow. We should not only say, “I spent the night at the plantón” but also “I am a plantonista.”

[Dick J. Reavis, who was a contributor to the original Rag in Austin, is an associate professor of English at North Carolina State University. He may be reached at dickjreavis@yahoo.com. Read more articles by Dick J. Reavis on The Rag Blog.]