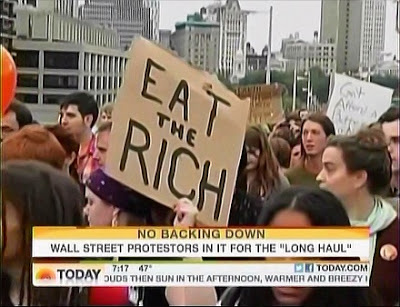 1. The implantation of the tactical innovation of the occupation model into the U.S. One day mass march-and-speeches demonstrations had run their course, largely because the ruling capitalist elites adopted the strategy of refusing to take them seriously. A wholly new phenomenon is presented when the demonstrators refuse to go home, set up housekeeping on the doorstep of the ruling class, and become unruly neighbors.

The MSM could no longer avert its gaze. It’s made for TV and it has gained traction. Now they can’t stop talking about it and their audience wants more.

2. Internationalism in action. The Occupation movement began in Tunisia last spring with the action of one man, Mohamed Bouazizi, who set himself on fire in protest of the dictatorial Tunisian government. From this spark the Arab Spring began. Then came the Indignados of Spain and Greece protesting austerity measures and lack of opportunity while the 1% prospered.

Both movements arose from similar origins and around related issues. The Occupation Movement is the most graphic expression of this new wave of international insurgency in the U.S. Egyptian movement veterans have joined the demonstration on Wall Street. It is a propitious moment for the development of new international relationships on the left.

3. For the first time since the 1930’s, a broad-based, explicitly anti-capitalist movement has sprung forth in the U.S. and its themes have quickly demonstrated great resonance among the general population. It was laughable when the MSM critics complained that the movement had no central message. That we have a ruling elite, the 1%, who rule corporate capitalism, that they have corrupted American democracy, and that their interests are contradictory to those of the other 99% is quite a bit of message. That message is, of course, Marxist to its core.

4. The Occupation movement has already changed the terms of the political debate. Liberal Democrats (Feingold, Rangel, Lewis, etc) are trying to associate themselves with the occupations and they will be strengthened by that association. It is reported that Obama has plans to “incorporate” the Occupation movement into his reelection campaign, if only rhetorically.

But with the Occupation movement, the manifestation of class warfare where the oppressed actually fight back against their class oppressors has become legitimized. It is now within the established paradigm to point fingers at the “malefactors of great wealth” again and hurl unequivocal abuse. This genie, whose central demand is simply for economic justice, will be difficult to re-bottle or to satisfy with rhetorical bromides.

5. The alliance of organized labor with the Occupation movement is historic and will serve to energize both. But this is only part of the great diversity of this movement that is drawing support from a very wide demographic.

I was shocked in Oakland that the homeless had joined the Occupation encampment until it occurred to me they had more reasons to be there than anyone else. Wandering among them, we were joined in conversation by a 60ish white nurse from San Rafael and a young anarchist brother in a Chomsky t-shirt while a middle-aged Chicana played the guitar and sang in Spanish to the assembled.

6. The Occupation movement emerged with amazing spontaneity. Sparks are lit all the time. Finally, one of them ignited because the objective conditions were so ripe. This clearly fits an anarchist model and is a rejection of the Leninist model. Perhaps the most astounding element at this point is that current polls show the “occupiers” twice as popular among the general public as the Tea Party.

The consciousness is there and anxious to be led in militant new expressions that, given our major party’s pervasive prostitution to the 1%, transcend what conventional party politics can offer.

Back to the barricades!