Dictating What You’re Allowed to Know 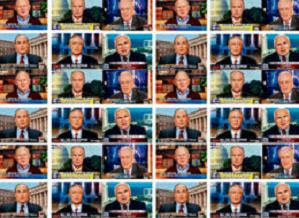 A fine example of suppression of the truth, a characteristic of the best examples of fascist states around the globe and throughout history. Remember that when you are carted off to jail for saying something unkind about an influential politician.

Summary: A New York Times article detailed the connection between numerous media military analysts and the Pentagon and defense industries, reporting that “the Bush administration has used its control over access and information in an effort to transform” media military analysts “into a kind of media Trojan horse — an instrument intended to shape terrorism coverage from inside the major TV and radio networks.” A Media Matters review found that since January 1, 2002, the analysts named in the Times article — many identified as having ties to the defense industry — collectively appeared or were quoted as experts more than 4,500 times on ABC, ABC News Now, CBS, CBS Radio Network, NBC, CNN, CNN Headline News, Fox News, MSNBC, CNBC, and NPR.

To read all of it, complete with analysis of who did what and to whom, click here. / Media Matters

This entry was posted in RagBlog and tagged Journalism, Media, Military, Propaganda. Bookmark the permalink.