Does Amerika Consist Largely of Morons?

The Association president rhetorically asks about someone putting up a sign advocating the bombing of Iraq. We wonder WTF he thinks the US is currently doing, singing lullabies for the Iraqis? Moron … 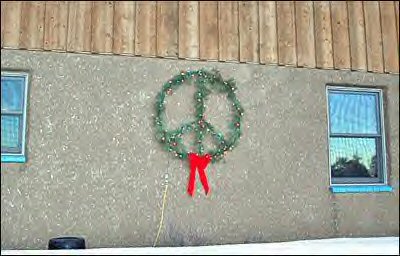 DENVER (Nov. 26) – A homeowners association in southwestern Colorado has threatened to fine a resident $25 a day until she removes a Christmas wreath with a peace sign that some say is an anti-Iraq war protest or a symbol of Satan.

Some residents who have complained have children serving in Iraq, said Bob Kearns, president of the Loma Linda Homeowners Association in Pagosa Springs. He said some residents have also believed it was a symbol of Satan. Three or four residents complained, he said.

“Somebody could put up signs that say drop bombs on Iraq. If you let one go up you have to let them all go up,” he said in a telephone interview Sunday.

Lisa Jensen said she wasn’t thinking of the war when she hung the wreath. She said, “Peace is way bigger than not being at war. This is a spiritual thing.”

Jensen, a past association president, calculates the fines will cost her about $1,000, and doubts they will be able to make her pay. But she said she’s not going to take it down until after Christmas.