Don’t Write Off That Attack on Iran Quite Yet 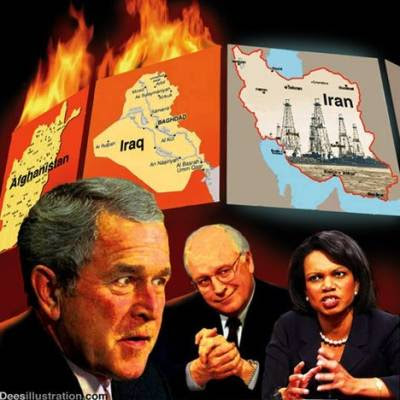 Waiting for the Curtain to Rise
By Alexander Cockburn / October 24, 2008

So what happened to the Bush/Cheney pre-election attack on Iran? It’s like everything else. You think you have months. You put it on one side, in the “things to be done tomorrow” pile. Suddenly it’s a matter of weeks, then days. Then the moment just slips away. The father of one of my neighbors here in Petrolia had been a captain in the Wehrmacht and fought at Stalingrad. He’s dead now but a few years ago my brother Andrew once asked him, “Captain, what happened at Stalingrad?” “Vell, Andrew, the Fuehrer wanted to avoid casualties. Und then the equipment was running out. A tank here, a tank there. Und then..then it was too late!”

I guess Bush and Cheney are too busy working on the pardons to have time for anything else like an attack on Iran. . But don’t fret. Joe Biden hints that he and Obama are working on it, though they may declare war on Russia first. Or Venezuela. So much to do in those first 100 days. An empire in October will still be an Empire next January. We’ll have continuity.

“Mark my words,” Biden said solemnly at a Seattle fundraiser last Sunday. “It will not be six months before the world tests Barack Obama like they did John Kennedy. The world is looking. We’re about to elect a brilliant 47-year-old senator president of the United States of America. Remember I said it standing here if you don’t remember anything else I said. Watch, we’re gonna have an international crisis, a generated crisis, to test the mettle of this guy.”

What exactly is Biden hinting at in that last sentence? From the context of that whole paragraph it’s clear enough to me he’s suggesting that despite hopes that post-Bush/Cheney America might backpeddle from hasty military confrontations, President Obama will stand tall and lose no time in going eyeball to eyeball with those who would test his resolve.

When JFK was worried that his mettle was being tested and he might look like a wimp, we got the Berlin crisis of July, 1961. We got right to the brink of World War Three.

So don’t write off that attack on Iran quite yet. On Iran Obama is more hawkish than McCain; on Afghanistan and Pakistan too.

A Ha’aretz story for July 28 of this year reported that in their meeting of July 24 “Obama reportedly told Olmert that he is interested in meeting the Iranians in order to issue clear ultimatums. “If after that, they still show no willingness to change their nuclear policy, then any action against them would be legitimate,” an Israeli source quoted him as saying.”

As CounterPuncher Marc Schuler, who sent me the quote, remarks, “To me, Obama is saying he’ll ‘fix’ the negotiations just like the intel on Iraq was ‘fixed’. This sounds very much like Bush-style negotiations. Deliver an ultimatum, then if the other side doesn’t just surrender and comply, start the military attacks.”

“I’ve forgotten more about foreign policy than most of my colleagues know,” Biden says. It’s probably true. In the US Congress the bar is set very low. I remember in the debate with Sarah Palin Biden was praised in the press for his effortless mastery of detail. Jonah Goldberg wrote a funny piece in the Los Angeles Times about this chorus of approval for Biden’s knowledgeable aplomb:

Biden was at ease; he easily rattled off a string of falsehoods and gasbaggeries.

According to the master senator, the U.S. and France “kicked Hezbollah out of Lebanon.” Afterward, according to Biden, “I said and Barack said, ‘Move NATO forces in there. Fill the vacuum, because if you don’t know — if you don’t, Hezbollah will control it.’ ” Perhaps Biden meant to say the U.S. and France kicked Syria out of Lebanon. But even this is woefully glib. Syria never fully abandoned Lebanon. And there was no “vacuum” for Hezbollah to fill. The terrorist group was already firmly in control of southern Lebanon and part of the government. No one remembers Biden and Obama fighting for the stupidly impossible NATO move either….

The scrapper from Scranton boasted about bonding with the common folks at a restaurant that’s been closed for two decades.

Biden’s lucky in having an opponent for the vice presidential slot who’s now drawing about 95 per cent of the press coverage for the entire campaign. There’s no space for nasty questions about his very special relationship to MBNA, the largest independent credit card company in the world, or for the immense favors he did for the credit card industry as a whole with the bankruptcy bill that even Bill Clinton vetoed before Bush finally signed it. But did anything ever so clearly indicate the truly incredible stupidity of McCain’s team of strategists, handlers and consultants than the disaster the Palin candidacy has become?

I thought the original choice of Palin wasn’t a bad one, from the point of view of the McCain campaign.. Most people would certainly rather look at the governor of Alaska on TV than, say, the governor of Massachusetts and, after some judicious voice coaching for which we haven’t yet seen the price tag, even rather listen to her too. On the general principle that state troopers are the scum of the law-enforcement pond, I was all for the Palins’ efforts to fire the Taser-happy former in brother-in-law. She was a fresh gust in the rank, stale air of Campaign 008. So instead in buying Palin a couple of new outfits in slightly upgraded sync with her unpretentious Alaska wardrobe the handlers went hog wild in Nieman Marcus and unleashed $150,000. Then they dropped $24,000 in two weeks on her hair stylist. So much for the spokeswoman for the ordinary folk. The only encouraging aspect of the $24,000 was that it was twice what McCain’s economic and foreign policy advisers were paid, showing a correct sense of priorities. Mind you, the economist should be off the payroll altogether, since he destroyed McCain’s only shot at the White House by not advising him to oppose the bailout. The foreign policy man presumably has his subsidies from the Georgian president to fall back on.

Sarah Palin’s job was to firm up the evangelical base, which has never trusted McCain. She’s done that. But then the handlers send her into a metrosexual, ultraliberal sinkhole like Saturday Night Live where she gets made a fool of. A Christian evangelical friend of mine called mournfully the next mourning to tell me than he’d previously rated Palin at 100 per cent, but after seeing her consorting on SNL with the likes of Alec Baldwin he’d dropped his approval to 75 per cent and would never think about her in the quite the same way again. (Mind you, he told me a few days later he wasn’t bothered about the wardrobe and hair expenses and said Palin fans in his part of the country thought it was one more sign of the bias of the liberal media. “She’s a star now, Alex. You can’t blame her for wanting to look pretty.”)

All the same, a real instinct for populism, right or left, means going to Muncie, Indiana and sounding as though you cared that half the city is out of work, not chirping about Alaska’s god-given resources. You would have thought that even Palin would have realized that. The way things are going for the Palin-Wurzelbacher ticket, she’ll have plenty of time for post-mortems and if-onlys back in Alaska. At least McCain has remembered to come out for parents’ choice on infant vaccination.

So far as the progressives and the left are concerned, Palin’s useful function has been to detain them from misgivings about the Democratic ticket which 98 per cent of them are going to vote for. From the vantage point of 2008 I wouldn’t blame Al Gore or John Kerry from feeling that maybe there’s been a double standard at work here, between the rough treatment they got from the left and from radical environmentalists, as compared to the well-mannered silence about Obama’s call for a 90,000 increase in the Armed Forces, his endorsement of nuclear power, “clean coal”, warrantless wire-tapping, tort reform, real ID, groveling to the bankers and the Israel lobby and so forth. K St loves Obama. So do the defense contractors. They love Biden too. Just to refresh your memories of what a progressive platform actually looks like, take a look at the website of the Nader campaign. Like the U.S. senators’ knowledge of foreign policy, the bar these days for what the left finds bearable is awfully low. The more the left holds its tongue, the lower the bar will go.

Alexander Cockburn can be reached at: alexandercockburn@asis.com.