Doug Zachary on the Passing of Folk Legend Utah Phillips 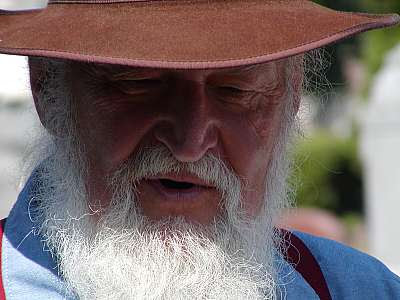 [Singer, songwriter, labor organizer, Korean war vet and man of peace Utah Phillips died of congestive heart failure on May 23 at his home in Nevada City, California. Rag Blogger Doug Zachary of Veterans for Peace, who organized a recent benefit for Phillips in Austin, provides these reflections. Previous posts about the benefit and about Phillips death can be found here.]

I had become close to Utah Philips over the past month as the Neil Bischoff chapter of Veterans For Peace planned the May 18 benefit for him at Jovita’s in Austin. We had several conversations, ranging from ten minutes to an hour, wherein I received the blessing of my life. I felt that Utah was pouring his hard-earned wisdom into all my empty spaces, and I have never felt more loved. Two members of the NB chapter donated a Lifetime Membership in VFP for Utah, which I was moved to have shipped to him Fed Ex overnight; somehow I knew that he was about to jump onto a freight train and disappear from view. He received his VFP Lifetime ID card just before he moved on.

Neil Bischoff and Utah Phillips shared a common story. They both went AWOL while in a theater of war; Utah in Korea and Neil in Viet Nam. One day Utah’s company commander told him that all the mixed-race orphans fathered (so to speak) by U.S. soldiers, although rejected by the Koreans, would eventually be a blessing because they would improve the stock of the Korean people. Utah immediately went over the hill and found the Korea House where folks were working to educate soldiers concerning the humanity of the Korean people. Neil Bischoff’s legend: He decided one day that he would no longer cooperate with the Army; he took his guitar and hopped on a series of helicopters and toured Viet Nam as an AWOL soldier.

I was up at Fort Hood in Killeen, TX, putting flyers on cars at the mall and approaching soldiers inside the mall and at HEB and Target when I received the news that Utah had died. I remembered what another Wobbly had said, “Don’t mourn, Organize!” . . . and I continued with my work throughout the Holiday weekend. Then, this morning, hot on my trail like my daddy’s black ‘n tan hounds, grief ran me to the ground. I have spent some time with that, and now it is “Back to the Barricades!”.

Folks can still make a contribution to Utah by sending a check to Joanne Robinson, Utah’s wife, at PO BOX 1235, Nevada City, CA. 95959.

This is the official Obituary as provided by the family.

Utah Phillips, a seminal figure in American folk music who performed extensively and tirelessly for audiences on two continents for 38 years, died Friday of congestive heart failure in Nevada City, California a small town in the Sierra Nevada mountains where he lived for the last 21 years with his wife, Joanna Robinson, a freelance editor.

Born Bruce Duncan Phillips on May 15, 1935 in Cleveland, Ohio, he was the son of labor organizers. Whether through this early influence or an early life that was not always tranquil or easy, by his twenties Phillips demonstrated a lifelong concern with the living conditions of working people. He was a proud member of the Industrial Workers of the World, popularly known as “the Wobblies,” an organizational artifact of early twentieth-century labor struggles that has seen renewed interest and growth in membership in the last decade, not in small part due to his efforts to popularize it.

Phillips served as an Army private during the Korean War, an experience he would later refer to as the turning point of his life. Deeply affected by the devastation and human misery he had witnessed, upon his return to the United States he began drifting, riding freight trains around the country. His struggle would be familiar today, when the difficulties of returning combat veterans are more widely understood, but in the late fifties Phillips was left to work them out for himself.

Destitute and drinking, Phillips got off a freight train in Salt Lake City and wound up at the Joe Hill House, a homeless shelter operated by the anarchist Ammon Hennacy, a member of the Catholic Worker movement and associate of Dorothy Day.

Phillips credited Hennacy and other social reformers he referred to as his “elders” with having provided a philosophical framework around which he later constructed songs and stories he intended as a template his audiences could employ to understand their own political and working lives. They were often hilarious, sometimes sad, but never shallow.

“He made me understand that music must be more than cotton candy for the ears,” said John McCutcheon, a nationally-known folksinger and close friend.

In the creation of his performing persona and work, Phillips drew from influences as diverse as Borscht Belt comedian Myron Cohen, folksingers Woody Guthrie and Pete Seeger, and Country stars Hank Williams and T. Texas Tyler.

A stint as an archivist for the State of Utah in the 1960s taught Phillips the discipline of historical research; beneath the simplest and most folksy of his songs was a rigorous attention to detail and a strong and carefully-crafted narrative structure. He was a voracious reader in a surprising variety of fields.

Meanwhile, Phillips was working at Hennacy’s Joe Hill house. In 1968 he ran for a seat in the U.S. Senate on the Peace and Freedom Party ticket. The race was won by a Republican candidate, and Phillips was seen by some Democrats as having split the vote. He subsequently lost his job with the State of Utah, a process he described as “blacklisting.”

Phillips left Utah for Saratoga Springs, New York, where he was welcomed into a lively community of folk performers centered at the Caffé Lena, operated by Lena Spencer.

“It was the coffeehouse, the place to perform. Everybody went there. She fed everybody,” said John “Che” Greenwood, a fellow performer and friend.
Over the span of the nearly four decades that followed, Phillips worked in what he referred to as “the Trade,” developing an audience of hundreds of thousands and performing in large and small cities throughout the United States, Canada, and Europe. His performing partners included Rosalie Sorrels, Kate Wolf, John McCutcheon and Ani DiFranco.

“He was like an alchemist,” said Sorrels, “He took the stories of working people and railroad bums and he built them into work that was influenced by writers like Thomas Wolfe, but then he gave it back, he put it in language so the people whom the songs and stories were about still had them, still owned them. He didn’t believe in stealing culture from the people it was about.”

A single from Phillips’s first record, “Moose Turd Pie,” a rollicking story about working on a railroad track gang, saw extensive airplay in 1973. From then on, Phillips had work on the road. His extensive writing and recording career included two albums with Ani DiFranco which earned a Grammy nomination. Phillips’s songs were performed and recorded by Emmylou Harris, Waylon Jennings, Joan Baez, Tom Waits, Joe Ely and others. He was awarded a Lifetime Achievement Award by the Folk Alliance in 1997.

Phillips, something of a perfectionist, claimed that he never lost his stage fright before performances. He didn’t want to lose it, he said; it kept him improving.

Phillips began suffering from the effects of chronic heart disease in 2004, and as his illness kept him off the road at times, he started a nationally syndicated folk-music radio show, “Loafer’s Glory,” produced at KVMR-FM and started a homeless shelter in his rural home county, where down-on-their-luck men and women were sleeping under the manzanita brush at the edge of town. Hospitality House opened in 2005 and continues to house 25 to 30 guests a night. In this way, Phillips returned to the work of his mentor Hennacy in the last four years of his life.

Phillips died at home, in bed, in his sleep, next to his wife. He is survived by his son Duncan and daughter-in-law Bobette of Salt Lake City, son Brendan of Olympia, Washington; daughter Morrigan Belle of Washington, D.C.; stepson Nicholas Tomb of Monterrey, California; stepson and daughter-in-law Ian Durfee and Mary Creasey of Davis, California; brothers David Phillips of Fairfield, California, Ed Phillips of Cleveland, Ohio and Stuart Cohen of Los Angeles; sister Deborah Cohen of Lisbon, Portugal; and a grandchild, Brendan. He was preceded in death by his father Edwin Phillips and mother Kathleen, and his stepfather, Syd Cohen.

Go here for previous posts about Utah Phillips on The Rag Blog.