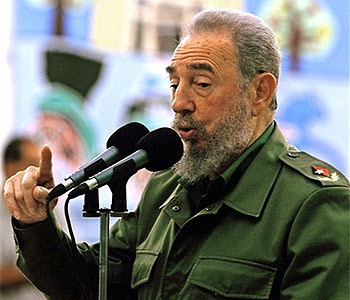 Castro Criticizes Obama Over Embargo
By Will Weissert / May 26, 2008

In a column published Monday by government-run newspapers, Castro said Obama was “the most-advanced candidate in the presidential race,” but noted that he has not dared to call for altering U.S. policy toward Cuba.

“Obama’s speech can be translated as a formula for hunger for the country,” Castro wrote, referring to Obama’s remarks last week to the influential Cuban American National Foundation in Miami.

Obama said he would maintain the nearly fifty-year-old trade sanctions against Cuba as leverage to push for democratic change on the island. But he also vowed to ease restrictions on Cuban Americans traveling to Cuba and sending money to relatives.

He repeated his willingness to meet with Raul Castro, who in February succeeded his elder brother Fidel to become the nation’s first new leader in 49 years.

Castro said Obama’s proposals for letting well-off Cuban Americans help poorer relatives on the island amounted to “propaganda for consumerism and a way of life that is unsustainable.”

He complained that Obama’s description of Cuba as “undemocratic” and “lacking in respect for liberty and human rights” was the same argument previous U.S. administrations “have used to justify their crimes against our homeland.”

Castro, 81, has not been seen in public since undergoing emergency surgery in July 2006, but he often publishes columns in state newspapers.

Castro’s column came three days after a prominent dissident group wrote an open letter to Obama suggesting that his idea of talking directly with Cuban leaders could help win freedom for prisoners.

“We have great hope that you can contribute to the immediate, unconditional liberation” of prisoners, wrote the Ladies in White, a group formed by relatives of people jailed in a government crackdown on political opposition in 2003.

This entry was posted in RagBlog and tagged Latin America, Obama. Bookmark the permalink.