Down With the Constitution

At least, as far down as the Bush administration can bury it. 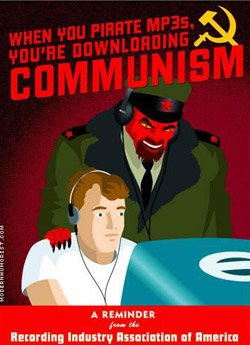 A landmark legal case on behalf of the Recording Industry Association of America and other global trade organizations seeks to criminalize all Internet file sharing of any kind as copyright infringement, effectively shutting down the world wide web – and their argument is supported by the U.S. government.

Ray Beckerman, a lawyer representing clients in cases against the RIAA, recently took part in a conference call organized by DefectiveByDesign.org, an organization which opposes DRM Technology, content restricting programs embedded into software that blocks users access to music, movies, software and other forms of digital data.

Beckerman describes how Internet users are randomly targeted by the RIAA for simply having a folder of music on their computer, kept in the dark about legal details and intimidated into paying thousands of dollars immediately or facing a federal lawsuit. The RIAA doesn’t even attempt to prove copyright infringement with specific examples, dates or times – it simply coerces and threatens the victim until they relent into paying out huge settlement fees.