Dr. Stephen R. Keister : Tell the Republicans: ‘Without Health Life is Not Life’ 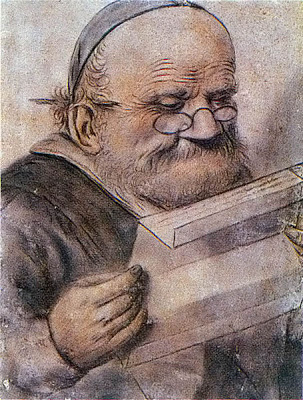 François Rabelais lisant, anon. drawing, early 17th Century / Wikimedia Commons.
Rabelais: ‘Without health life is only a state of languor and an image of death.’

This reminded me of a painting of a 17th century hospital with its endless wards, white clad sisters and care for nobleman or serf which were the same in the eyes of the then caretakers of the sick.

Rabelais wrote, “Without health life is not life; it is not living life. Without health life is only a state of languor and an image of death.” Then why is it the simpering Sen. Mitch McConnell and his Republican cohorts in the Senate are opposed to universal health care in America under the guise of fiscal responsibility, of the sanctity of the budget, and the hollow slogan ‘that we in United States have the best health care in the world,” while they themselves are provided excellent health care by the federal government?

I compose this on a Sunday morning, a time for reflection and meditation. I was recalling a dinner I attended some six years ago in Paris, attended by three students, two American, one Swiss, who were attending the American University in Paris. During the course of the conversation I mentioned how nice it was to have The American Hospital available in the 16th Ar. The American students responded almost in unison that that facility was fine if one arrived in a limousine and wearing a mink coat! They noted that if they were ill they attended the dispensary at one of the French hospitals and were given first rate compassionate care, at little expense, with little waiting. This in turn reminded me of a painting, I believe at the Louvre, of a 17th century hospital (the Pitie-Salpetriere or the Hotel Dieu?) with its endless wards, white clad sisters and care for nobleman or serf which were the same in the eyes of the then caretakers of the sick.

I remember as well my intern/residency in the late 1940s at Mercy Hospital in Pittsburgh with its tremendous wards for the indigent patients. In some way these folks got the best of care under the direction of the Sisters and the head of the department of internal medicine, Dr. W.W.G. McLachlan. Many of our patients came from two “flop-houses,” The Friendly Inn and The Improvement of The Poor; most were alcoholics. One morning during rounds Dr Maclachlan paused overly long at a bedside, looking at a chart, and asked the gentleman, who was quite ill with pneumonia, “Is your nickname “Moose” and did you play for the Chicago White Sox? The answer was affirmative. The next day Dr. Maclachlan told us that he had called a patient of his, who owned the Pittsburgh Pirates, and they had scheduled, on an open date for the Pirates and White Sox, an exhibition game at Forbes Field to raise funds to rehabilitate the “Moose.” It came to fruition…. a happy ending. Where has all of this gone? Where is such idealism and compassion today?

When I first started practice in Erie, Pa. we devoted two hours/morning, two months per year to care of charity patients, and as well oversaw a free clinic one morning a week. I was familiar with a dermatologist who at that time made house calls on cold mornings, on sick infants with a dermatitis. The gentleman also urged his patients to call him at home during the evenings. With the advent of the usurpation of medical care in the United States by the insurance conglomerates this vanished, a noble profession was converted to a business, for the benefit of the insurance executives and stockholders.

John Geyman, M.D., writing in Tikkun magazine points out that the inefficiency and bureaucracy of our 1,300 private insurers are not sustainable. (According to the Blue Cross Blue Shield Association there are 17,000 different health plans in Chicago.) In addition premiums for private health insurance have grown by more than 100% since 2000, and are projected to consume all of average household income by 2025. Understandable in view of the fact that administrative overhead of private insurers is 5-9 times higher than not-for-profit Medicare. (Incidentally, Dr. Geyman is a professor of family medicine at the University of Washington and past president of Physicians For A National Health Care Program . Yet the Senate Republican ideologues respond, “There is no health care crises!” and falsely assert that single payer, universal care, or the Obama plan, is some horrible, but non-existent, thing called “socialized medicine.”

A recent Commonwealth Fund study found that across 37 indicators covering quality, access, efficiency, and equity, the United States achieves “an overall score of 65 out of a possible 100 when comparing national averages with benchmarks of best performance achieved internationally.”

Yet beware of seemingly well meaning plans being circulated that MANDATE as part of their format that obligatory purchase of insurance be included.. I have noted that constitutional scholars have raised the question as to whether the government can mandate that a citizen buy anything, including insurance, from a private company. Yes, the government has the right of taxation; however, the right to demand by legislation, that one make a purchase leads into a gray zone that demands an opinion from a Federal Court. I would suggest that Rep. Conyers’ committee study this problem in the meantime.

Our health care problems are larger than just getting a physician for the child’s tonsillitis, mother’s migraines, or father’s angina. This spills over into the field of public health, where hopefully President-elect Obama will appoint a Surgeon General with a background in public health. I look at the Center For Disease Control which has been deprived of much of its professional staff, is underfunded, and has undergone failure of morale under the Bush Administration. In the past year this agency has been unable to determine the source of repeated Salmonella outbreaks. One hopes that it is restaffed with dedicated, competent professionals, rather than political hacks, and funded to a point that it can carry out its intended function.

The Food and Drug Administration as well must be rehabilitated. Nine FDA scientists have sent a letter to President-elect Obama’s transition team, urging the incoming administration to reform the “fundamentally broken” agency. The letter’s authors reveal that President Bush’s FDA managers “ordered, intimidated, and coerced scientists to manipulate their research results in violation of federal law.” Scientists who did not comply with managers faced “the threat of disciplinary action.” In addition, they wrote that the FDA has promoted and rewarded some of the managers involved in the inappropriate practices. Thus, I would respectfully suggest that none of the management, or the scientists, have any relationship to the pharmaceutical industry nor to any association promoting a specific religious ideology.

Collateral public health issues must be addressed by the new administration as well. Young folks in the United States have one of the highest rates of teen age pregnancy in the Western World as well as one of the highest rates of STD among young women. The United States is unique in the civilized world as far as the federal government’s funding of programs for “abstinence” and in opposing the teaching of safe sex and contraception. Here our attitudes parallel some of the central African nations. Yet, our young folks are bombarded by sexual innuendo on TV and in motion pictures day after day, along with neverending violence, and none of the proponents of abstinence are marching on the streets to rectify these influences. Somehow the religious right is only selectively absorbed with the human genitalia! Where public health or human emotional well-being is involved they just do not seem to give a damn. One wonders where the anti-sex education folks are when day after day our children are bombarded by TV commercials for Viagra and the like. What is the eight year old child’s reaction to the announcer noting that “if the erection does not disappear in four hours, see your doctor right away.”

As I study the issue of health care for all, I find no simplistic solutions, as we are involved in a societal and cultural crisis, perhaps larger than any single person or well meaning group of persons. I recently purchased Russ Baker’s new book “Family of Secrets” and find that the Bush dynasty is only symptomatic of a much larger problem here in the United States. I would strongly suggest that anyone interested in contemporary affairs become familiar with the well researched thrust of the author’s thinking. A quotation at the beginning of the first chapter sets the tone. Franklin D. Roosevelt to Colonel Edward House, Oct. 21, 1933: “The real truth of the matter is, as you and I know, that a financial element in the larger centers, has owned the Government ever since the day’s of Andrew Jackson.”

1 Response to Dr. Stephen R. Keister : Tell the Republicans: ‘Without Health Life is Not Life’