Ecuador: "We All Want National Sovereignty" 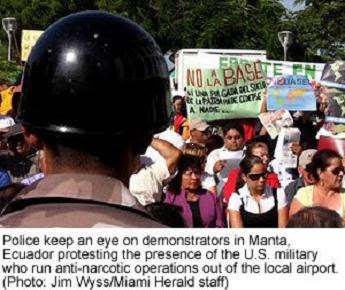 MANTA, Ecuador – Mayor Jorge Zambrano pulled up to the Manta City Hall in his black Ford Explorer, expecting to find a rally in support of the American military outpost that runs drug-surveillance flights from this gritty port city.

He left an hour later behind a wall of riot shields and a cloud of Mace, as police fended off banner-waving protesters who crashed the event in March.

With 18 months left on its decade-long contract, the U.S. Forward Operating Location in Manta has few friends in this South American nation — and fewer still who believe that the agreement has any hope of being extended.

Ecuadorean President Rafael Correa has vowed not to renew the base’s contract beyond its November 2009 expiration. And politicians drafting a new constitution have proposed banning the base or any other foreign military presence in the country.

If the Manta base closes, it would leave the United States shopping for a new airstrip for the radar-mounted AWAC E3s, and P-3 spy planes that ply the Eastern Pacific, looking for drug runners.

It would also be another dark turn for rapidly deteriorating U.S.-Ecuadorean relations.

The United States sees the Manta compound — with its manicured lawns and staff of about 150 pilots and crew members — as part of a multinational effort that helped block $4.2 billion worth of narcotics last year.

But in Ecuador, the Base de Manta is viewed largely as an affront to national sovereignty that threatens to drag the country into the regional drug war.