Ed Felien : Batman and the Culture of Violence 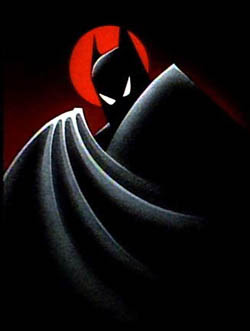 Batman image from Batman: The Amimated Series / Wikimedia Commons.
Batman, The Joker, Nazis
and the culture of violence in America

Plato recognized the subversive value of art. He knew that art didn’t just hold a mirror up to society and reflect everything. It holds a lens that selects, frames, and distorts.

Should we blame the Batman movies for the tragedy in Aurora? After murdering the people in the movie theater, James Holmes put his guns in his car and calmly told the police, “I’m the Joker.” He had booby-trapped his apartment so that anyone entering it would have set off massive explosions probably killing many more people. This begins to sound like The Dark Knight, where The Joker blew up a hospital because he was frustrated in getting revenge.

What explains the perverse pathology of The Joker? At one point in the movie he says he mutilated himself in sympathy with his wife who had been scarred by a knife, but later he says:

You wanna know how I got these scars? My father was a drinker and a fiend. And one night he goes off crazier than usual. Mommy gets the kitchen knife to defend herself. He doesn’t like that. Not. One. Bit. So, me watching, he takes the knife to her, laughing while he does it. He turns to me and says, “Why so serious?” Comes at me with the knife. “WHY SO SERIOUS?” He sticks the blade in my mouth. “Let’s put a smile on that face.” And…

In the comic book original, The Joker is disfigured by falling into a toxic vat while robbing a chemical factory. The story of child abuse and watching his mother be victimized by his father is the invention of Christopher Nolan, the writer and director of the series.

Nolan was praised by critics for making The Joker psychologically believable. Whether the incident of child abuse actually happened to The Joker is irrelevant. The story is so compelling and horrifying that it seems to justify even more horrible acts of revenge on an indifferent world. Anyone who has been victimized and feels that the world has turned away could identify with The Joker’s demand that the world take note of his dimension of pain.

Nolan’s comment on the tragedy in Aurora was self-serving and willfully naïve:

I believe movies are one of the great American art forms, and the shared experience of watching a story unfold on screen is an important and joyful pastime. The movie theater is my home, and the idea that someone would violate that innocent and hopeful place in such an unbearably savage way is devastating to me.

The Joker is fascinating in his capacity for violence and destruction, but no one would call him “joyful” or “innocent and hopeful,” and The Joker is more than half the weight of The Dark Knight.

Children learn to speak by imitating their parents. They learn to act by imitating role models. Cultural values are taught by popular culture. What is acceptable is what is popular. Don’t artists have to accept responsibility for the lessons their art teaches?

This is not a new question. The last time it was debated seriously was when The Beatles’ White Album was blamed for inspiring Charlie Manson and his gang to murder Sharon Tate and four others in August of 1969. Certainly, today, we consider The Beatles joyful, innocent and hopeful, but there are songs on the White Album that are very dark.

The children asked him if to kill was not a sin
“Not when he looked so fierce,” his mummy butted in
“If looks could kill it would have been us instead of him”
All the children sing

Or, “Happiness is a Warm Gun”:

In their sties with all their backing
They don’t care what goes on around
In their eyes there’s something lacking
What they need’s a damn good whacking.

Even the comic “Rocky Raccoon” has a dark edge:

Black cloud crossed my mind
Blue mist round my soul
Feel so suicidal
Even hate my rock and roll
Wanna die yeah wanna die
If I ain’t dead already
Ooh girl you know the reason why.

And Charlie Manson could believe that “Sexy Sadie” was talking directly about Sharon Tate:

But the song that was the biggest hit from the double album, the song with the longest legs, was “Revolution.” When John and Paul sing:

It’s probably John who ad-libs “in,” so a playful struggle goes on between the two as they go: “out” “in” “out” “in.” So, it’s left as an open question as to whether a revolution will mean destruction.

Panther Bobby Hutton had been killed by the Oakland police after he had surrendered in 1968, and Fred Hampton was killed by federal authorities sleeping in his bed in 1969. The Weather Underground began its violent campaign against the war in Vietnam and draft boards in 1969.

But this question goes back 2,500 years before The Beatles’ White Album. In Book III of The Republic, Plato seems to argue in favor of banning both The Beatles and Batman:

If a man, who through clever training can become anything and imitate anything, should arrive in our city, wanting to give a performance of his poems, we should bow down before him as someone holy, wonderful, and pleasing, but we should tell him that there is no one like him in our city and that it isn’t lawful for there to be. We should pour myrrh on his head, crown him with wreaths, and send him away to another city.

Plato recognized the subversive value of art. He knew that art didn’t just hold a mirror up to society and reflect everything. It holds a lens that selects, frames, and distorts. It judges society, and Plato knew it was possible that such judgment might find fault with his philosopher-kings. Plato believed it was best to eliminate the possibility of heresy while it was still outside the gates.

But, of course, Plato must have known that the instinct to create art that could reflect an idealized or distorted culture was an instinct in all of us. All of us have the capacity to create art, and whether the art reaffirms or criticizes society is a reflection of the individual artist’s point of view.

The Beatles’ White Album is a reflection of the popular resistance to the war in Vietnam, and, while it doesn’t articulate a coherent strategy, it seems in some songs to condone and romanticize armed struggle and guerrilla warfare.

The story of the Dark Knight is about Batman trying to save Gotham from a mad bomber. It sounds a lot like George W. Bush trying to save the world from Al Qaeda after the 9/11 bombing of the World Trade Center in New York City.

At one point the movie asks the question that has troubled philosophers and governments since the beginning of civilization: Is torture ever justified? The question is posed in the way it always is, “What if by torturing someone you could get valuable information that would save lives, you could prevent a bombing that could kill innocent people?”

Batman beats up The Joker to get him to reveal where he is holding two hostages. Christopher Nolan seems to be saying torture is justified in trying to save lives, as we see the Dark Knight inflict pain on The Joker.

There is a direct link between Christopher Nolan’s script for Batman and George W. Bush’s script for his dark knight. Dick Cheney explained the Bush Doctrine on Torture to Tim Russert a few days after 9/11:

We also have to work, though, sort of the dark side, if you will. We’ve got to spend time in the shadows in the intelligence world. A lot of what needs to be done here will have to be done quietly, without any discussion, using sources and methods that are available to our intelligence agencies, if we’re going to be successful. That’s the world these folks operate in, and so it’s going to be vital for us to use any means at our disposal, basically, to achieve our objective.

When they said we will use “any means at our disposal,” Bush and Cheney set themselves up above the law. Because the crime of 9/11 was so horrible, they felt using horrible means of retaliation simply balanced the scales of justice.

“An eye for an eye will leave everyone blind” is attributed to Gandhi.

Bush and Cheney did violence to the rule of law with their public justification of torture. If all crimes are allowed to balance the scales, then there is no law, and justice is simply the foot of the strongest on the neck of the weakest.

Someone who believes they have suffered a horrible injustice is then permitted to use whatever means they like to punish society and balance the scales.

Anders Breivik could justify killing 77 people associated with the Norwegian Labor Party because he believed their philosophy of multiculturalism was threatening the racial purity of Norway. Wade Michael Page could justify randomly killing six people in a Sikh temple in Oak Creek, Wisconsin, because he believed they were a threat to racial purity in America.

These are examples of racial extermination carried out by Nazi fanatics, and, if there is no rule of law, then their justification of their acts as a defense of racial purity makes as much sense as anything else.

America has lost its moral compass. More innocent women and children have been killed by drone attacks than were killed in Aurora. The President has a Kill List of people to be assassinated without trial or due process. We are supporting atrocities in Syria and claiming it is a popular rebellion.

It is probably true that life does imitate art. The killer in Aurora thought he was imitating The Joker. But, to disagree with Oscar Wilde, it is probably true that art more often imitates life. Batman was imitating Dick Cheney in his use of torture. The collapse of moral values, the end of the rule of law, the random violence are justified by the state and then rationalized by the individual, and they find their expression in art.