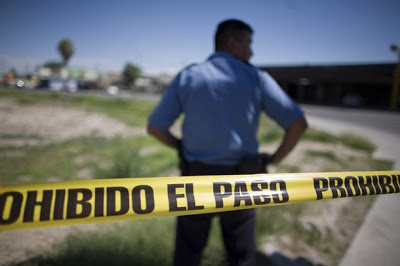 Maybe it’s time for a new look at drug prohibition:

A police officer guards a crime scene where four men were gunned down in a drive-by shooting in the border city of Ciudad Juarez Aug. 22, 2008. More than 2,000 people have died this year in Mexico’s drug war, mostly resulting from violence between rival gangs, in a fight for control of smuggling corridors into the United States. Ciudad Juarez, across the border from El Paso, Texas, has the highest murder toll in the country this year, with 867 killed, according to media. Photo by Reuters.

EL PASO — Mayor John Cook on Tuesday vetoed a unanimously supported resolution from City Council asking the federal government to seriously study the legalization of narcotics as a way to respond to the plague of violence that last year killed 1,600 people in Juárez.

The council on Tuesday had voted 8-0 on a resolution drafted by the city’s Border Relations Committee, outlining 11 steps the U.S. and Mexican governments can take to help El Paso’s “beleaguered and besieged sister city.”

All city representatives also supported an amendment by South-West city Rep. Beto O’Rourke that added a 12th step: the encouragement of the U.S. federal government to start a “serious debate” on the legalization of drugs.

Cook said it was the amendment that forced him to use his veto power for just the third time in his administration.

“The action of council … undermines the hard work of the committee by adding new language which may affect the credibility of the entire resolution,” he said in his veto.

“It is not realistic to believe that the U.S. Congress will seriously consider any broad-based debate on the legalization of narcotics,” Cook added. “That position is not consistent with the community standards both locally and nationally.”

Cook’s veto angered several on council, including some of his closest political allies.

“I am really disappointed. I went and told him that personally,” O’Rourke said. “This amendment received unanimous support from council and it also received the support of the members of the committee who wrote the resolution.”

“The controversial amendment merely calls for the initiation of a debate regarding the prohibition of narcotics … (it) does not endorse the legalization of drugs but it places it on the table for debate,” he said. “Ending cartel related violence in Juárez represents this region’s biggest challenge and justifies an all-inclusive dialogue concerning potential solutions.”

Cook did find some support from U.S. Rep. Silvestre Reyes, D-Texas, who said Tuesday that the council’s resolution wouldn’t have been supported in Washington, D.C.

“Legalizing the types of drugs that are being smuggled across the border is not an effective way to combat the violence in Mexico,” he said. “I would not support efforts in Congress that would seek to do so.”

O’Rourke and others on council said they are not advocating for the legalization of drugs, much less their use.

Rather, they want lawmakers to have a serious debate on whether the end of drug prohibition would have a positive impact on the level of violence that has erupted along the U.S.-Mexico border.

“I completely understand … this is a very uncomfortable conversation to have,” said West-Central city Rep. Susie Byrd. “But the reason that I am compelled to support the resolution as we approved it is that whatever we have been doing in the last 40 years has not worked.”

But Cook said the council missed the point on the message that the resolution as first drafted was meant to send.

“The whole purpose of the resolution was to get national attention to the violence in Juárez,” he said. “After it was amended, the focus was placed instead on legalizing drugs in the United States.”

O’Rourke said that the resolution was powerful as it was originally presented, but that his amendment was successful in taking the document “to the next level.”

“We started a conversation about solutions … a conversation that was supported by everyone on council,” he said. “The mayor, though, didn’t say a word during the meeting. It wasn’t until I received a Xerox copy of his veto that I heard from him.”

Cook said he was sorry that he didn’t voice his opposition to the amendment, but “frankly, I didn’t think it was going to pass.”

Byrd, who has previously criticized Cook’s vetoes, said the mayor needed to take action during the open meeting and not wait until the afternoon to act.

Also see The Power of Ideas in the War on Drugs by by Jacob G. Hornberger / Media With a Conscience / Jan. 7, 2008