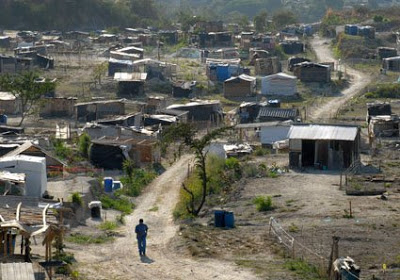 President Saca leaves President-elect Fumes with some serious obstacles in the areas of poverty, health, education and equality

[As President-elect Mauricio Funes prepares to take the reins in El Salvador, The Rag Blog’s Val Liveoak helps us understand the tough job he faces. This article is translated and adapted from reports on ElFaro.net.]

El Salvador is only close to achieving two of 12 Millennium Development Objectives that were projected for 2015, a 98 page document released May 21 disclosed.

Concerning the goal of reducing of poverty, outgoing President Elías Antonio Saca’s administration inherited in 2004 a lowering of the percentage of people in absolute poverty to below 14.1%. However he admitted in a press conference on May 28, that it is a “national disgrace” that over 800,000 Salvadorans remain in absolute poverty.

The document showed that the current administration failed to improve on most of the indices of poverty in the country, and on those that were improved on, the improvement was the result of previous administrations. Even members of President Saca’s own ARENA (considered to be the right-wing party) criticized President Saca as having failed to maintain the social image and policies of the ARENA party.

When President Mauricia Funes is inaugurated on June 1, he will receive a record high deficit of over a billion dollars, as well as a 48% decrease in taxes and fees collected, a decrease of 14% in the money sent from Salvadorans abroad to their families, and so little advances in the areas which impact the Millennium Objectives, that reaching them by 2015 seems farther away than ever.

As far as the Objective’s goals for universal primary education, there have been increases in the number of children entering primary schools, but the goal of 100% of students who enter first grade completing fifth grade, classified as “probable” in 2004, is downgraded to “difficult to achieve” in the 2009 report. Under the objective of promoting equality among the sexes and women’s autonomy, the goals of equal numbers of boys and girls receiving primary education has been over 100% completed (because there are more girls in the population than boys), but the goal of raising the proportion of women working in non-agricultural sectors to 50% has gone from “very likely” in 2004 to “difficult to achieve” in 2009.

In regard to infant and child mortality, El Salvador is on track to reach its 2015 goals of 17 per 1,000 deaths of children five and under, and 14 per 1,000 of infant mortality, and is also succeeding in vaccinating all children against measles. But the predicted rise in general poverty will likely decelerate the rates of improvement in these areas, and currently the health sector is in crisis — so that even in cities where improvement in mortality indices was most demonstrated, care has decreased in both quality and quantity. As always, medical services are less available in the rural area. Due to different ways of reporting statistics, maternal mortality cannot be compared in the 2004-2009 period.

In the area of reducing infectious diseases including malaria and AIDS, even the hope of gaining a wide understanding of AIDS risks among ages 15-24 by 2015 is categorized as “difficult to achieve,” while reducing the numbers of cases of AIDs appears impossible.

As far as potable drinking water and sanitation services, the goals are of 80.5% and 89% coverage in 2015, and progress toward these goals is adequate, but the availability of potable water varies with the season, and during dry seasons, water is scarce and expensive. Some of the public water systems have been turned over to private companies, under the neo-conservative policies of past ARENA administrations. While in some cases this has led to an increase in investments in infrastructure in urbanized markets, the cost of water has risen significantly wherever water is supplied by for-profit companies.

The public water program, ANDA, has received large government subsidies, but still operates at a loss, leading its director to call for more public education about conservation. In some slum neighborhoods, water for a household’s drinking, cooking and bathing can cost as much as $1 a day — when clothing has to be washed, costs are much higher, or residents walk to a (probably polluted) river or stream to wash.

Additionally the goal of reducing hunger by 50% was also classified as “difficult to achieve.”

Concerns that social spending may fail to sustain the gains toward these objectives were voiced by economist Juan Héctor Vidal: “El Salvador has the lowest rate of social spending in Latin America. Even not taking this into account, the spending is poorly administered, and [these factors] may reverse some of the gains we have achieved.”

This entry was posted in Rag Bloggers and tagged El Salvador, Latin America. Bookmark the permalink.