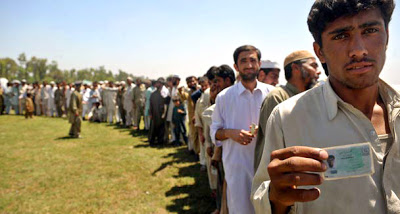 An internally displaced man holds up an identity card as he waits in line for relief supplies at a UNHCR distribution point at a makeshift camp in Mardan. Photo: Farooq Naeem.
Nearly 2.4 million displaced: UN
May 25, 2009

Ariane Rummery, spokeswoman for the UNHCR, said they had been given the figure by the North West Frontier Province authorities and expected the number to fluctuate after cross checks are carried out in the coming days.

Pakistan’s security forces launched their onslaught against Taliban fighters in the districts of Lower Dir on April 26, Buner on April 28 and Swat on May 8, sending terrified civilians fleeing their homes.

Most of the displaced are staying with friends and relatives, while others are crammed into government-run camps.

Information Minister Qamar Zaman Kaira told reporters the government was doing all it could to care for the massive number of uprooted people.

‘Around 2.3 million people have been displaced but this number is not final,’ he said.

The newly-displaced join more than 550,000 people who fled similar battles last year and rights groups have warned that it is Pakistan’s biggest movement of people since partition from India in 1947.

This entry was posted in RagBlog and tagged Pakistan, Refugees, Taliban, War. Bookmark the permalink.