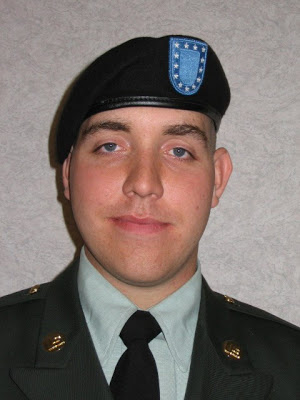 Eric Jasinski is being released from the Bell County Jail in Belton, Texas, tomorrow morning, April 24. He will have served 25 days of a 30-day sentence.

Jasinski, 23, who is a member of Iraq Veterans Against the War, went AWOL in 2009 to seek help for his PTSD. His story was reported on by Dahr Jamail in The Rag Blog.

Eric Jasinski enlisted in the Army in 2005, and deployed to Iraq in October 2006 as an intelligence analyst. He collected intelligence used to direct air strikes. After his return to the U.S., Jasinski suffered from severe PTSD resulting from what he did and saw in Iraq. He felt remorse and guilt for the way he contributed to loss of life. He went through a divorce and had friends killed and maimed in combat.

He tried to get treatment for PTSD and finish out his military contract. “In late 2008,” Jasinski said, ”they stop-lossed me [an involuntary extension of contract], and that pushed me over the edge. They were going to send me back to Iraq.” Jasinski went AWOL until December 11, 2009, when he turned himself in to authorities at Fort Hood.

The Army scheduled a Summary Court Martial for March 31. Jasinski was sentenced to 30 days in the Bell County Jail. Laura Barrett, Jasinski’s mother, told the Temple Herald Telegram, “This has been a total outrage. I cannot believe my son who is diagnosed with PTSD from his deployment to Iraq would be sent to jail.”

James Branum, Jasinski’s civilian defense attorney, submitted a clemency request asking that Jasinski be released on mental health grounds or transferred to the psych ward at Darnall Army Medical Center to complete his sentence. The Army did not respond. With Jasinki’s permission, Branum shared a letter written from the Bell County Jail by Jasinski.

Branum said, “We, as Americans, need to see how combat vets are treated today. Eric is in jail because he has PTSD and was denied the care he needed. His ‘desertion’ was an act of desperation, the act of a soldier who had no other options.”

Here is part of what Eric Jasinski wrote from the Bell County Jail in Belton, Texas. We publish it as he wrote it:

When I am taken out of jail back to Fort Hood for any appointments I am led around in handcuffs and ankle shackles in front of crowds of soldiers… which is overwhelming on my mind. My guilt from treating prisoners in Iraq sub-human and I did things to them and watched my unit do cruel actions against prisoners, so being humiliated like that forces me to fall into the dark spiral of guilt. I now know what it feels like to have no rights and have people stare and judge based on your shackles and I feel even more like a monster cause I used to do this to Iraqi people.

Even worse is the fact that this boils down to the military failing to treat my PTSD but I am being punished for it… I feel as if I am being a threat to others or myself and still the Army mental health professional blow me off just like in 2009 when I felt like I had no choice but to go AWOL, since I received a 5 minute mental evaluation and was stop-lossed despite my PTSD, and was told that they could do nothing for me. The insufficient mental evaluation from a doctor I had never seen before, combined with the insufficient actions by the doctor on 9 April show the Army is not trying to make progress…

I have tried to “do the right thing” as those in the Army say and all they do in return is destroy me even more mentally and publicly say that they are going to look out for me while behind closed doors the exact opposite is happening… I have been tossed in the trash just like the brave and honorable resisters of Vietnam. The machine never stops and it never changes.