Extraordinary Rendition: The Grief Isn’t Yet Over 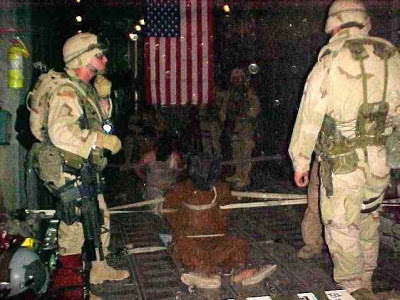 News that three more prisoners have been released from Guantánamo is cause for celebration, as all three men should never have been held in the first place. In a report to follow, I’ll look at the stories of the two Afghans released — one a simple farmer, the other a juvenile at the time he was seized — but for now I’m going to focus on the extraordinary story of the prisoner released to Pakistan, Mohammed Saad Iqbal Madni, whose grotesque mistreatment involves “extraordinary rendition” and torture spanning several continents.

A Pakistani-Egyptian national and the son of an Islamic scholar, Madni was 24 years old when he arrested in Jakarta by the Indonesian authorities on January 9, 2002, after a request from the CIA. He was then rendered to Egypt, apparently at the urging of the Egyptian authorities, working in cooperation with the CIA. In Egypt, he was tortured for three months, and was flown back to Afghanistan on April 12, 2002 with Mamdouh Habib, an Australian prisoner, seized in Pakistan, who was released in January 2005, and who has spoken at length about his torture in Egypt. Eleven months later, Madni was transferred to Guantánamo.

Although Madni did not speak about his treatment during any of his military reviews at Guantánamo, several prisoners confirmed that he was tortured by the Egyptians. Rustam Akhmyarov, a Russian prisoner released in 2004, said that Madni told him of his time “in an underground cell in Egypt, where he never saw the sun and where he was tortured until he confessed to working with Osama bin Laden,” and added that he “recalled how he was interrogated by both Egyptian and U.S. agents in Egypt and that he was blindfolded, tortured with electric shocks, beaten and hung from the ceiling.”

Akhmyarov also said that Madni was in a particularly bad mental and physical state in Guantánamo, where he “was passing blood in his faeces,” and recalled that he overheard U.S. officials telling him, “we will let you go if you tell the world everything was fine here.” Mamdouh Habib confirmed Akhmyarov’s analysis, recalling how Madni had “pleaded for human interaction.” He said that he overheard him saying, “Talk to me, please talk to me … I feel depressed … I want to talk to somebody … Nobody trusts me.” On the 191st day of his incarceration, according to Madni’s own account, he attempted to commit suicide.

The Tipton Three — Rhuhel Ahmed, Asif Iqbal and Shafiq Rasul, British citizens released in 2004 — also recalled Madni in Guantánamo. They said that “he had had electrodes put on his knees: and that “something had happened to his bladder and he had problems going to the toilet,” but explained that he had been told by interrogators that he would not receive treatment unless he cooperated with them, in which case he would be “first in line for medical treatment.”

Quite what Madni was supposed to have done to justify this torture and abuse was never adequately explained at Guantánamo. The U.S. authorities urged the Indonesians to arrest him after they claimed to have discovered documents that linked him to Richard Reid, the inept and mentally troubled British “shoe bomber,” who was arrested, and later received a life sentence, for attempting to blow up an American Airlines flight from Paris to Miami in December 2001, but Madni persistently denied the connections. In his Combatant Status Review Tribunal — in which he pointed out that he is from a wealthy and influential family, is fluent in nine languages and is a renowned Islamic scholar — he maintained that he was betrayed by one of four radical Islamists whom he met by accident on a trip to Indonesia in November 2001 to sort out family business after his father’s death.

This account was backed up during an investigation by the Washington Post, who concluded that he rented a house in Jakarta, and did nothing more sinister than visiting the local mosque, handing out business cards “identifying him as a Koran reader for an Islamic radio station,” and spending “hours on end watching television at a friend’s house.” Succinctly summing up what happened to him, he told his tribunal, “After I went to Indonesia, I got introduced to some people who were not good. They were bad people. Maybe I can say they were terrorists. When someone gets introduced to someone, it is not written on their foreheads that they are bad or good.”

According to Ray Bonner of the New York Times, the entire basis for Madni’s capture, rendition and torture was that Madni, described by an uncle in Lahore as a young man who “had a childish habit of trying to portray himself as important,” had made the mistake of telling the men he had met — members of the Islamic Defender Front, an organization that espoused anti-Americanism, but had not been involved in an terrorist attacks — that bombs could be hidden in shoes.

The comment was picked up by Indonesian intelligence agents, who were monitoring the men, and was relayed to the CIA, who decided to pick him up after Richard Reid’s failed shoe bomb attack a few weeks later. Although a U.S. intelligence official confirmed Madni’s uncle’s account, calling Madni a “blowhard,” who “wanted us to believe he was more important than he was,” and another thought that he would be held for a few days, “then booted out of jail,” more senior officials clearly had other plans. Madni’s six and a half year ordeal, therefore, was based on a single ill-advised comment.

If Madni’s family are sufficiently well connected, it may well be that we haven’t heard the last of this particular story of the gruesome impact of torture arrangements between the United States and Egypt, based on inadequate intelligence, and the quiescent role of the Indonesian authorities. On the other hand, Madni, if released in Pakistan, may just want to rebuild his life in seclusion. This would be understandable, of course, but his abominable treatment deserves to be more than a mere footnote in the history of the Bush administration’s vile and unprincipled policies of “extraordinary rendition” and torture.

Andy Worthington is the author of The Guantanamo Files: The Stories of the 774 Detainees in America’s Illegal Prison. His website is: http://www.andyworthington.co.uk/.

This entry was posted in RagBlog and tagged Bush Administration, Guantanamo, Torture, War on Terror. Bookmark the permalink.