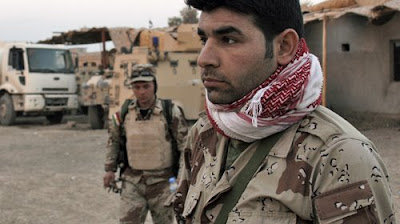 In Mosul, a member of the Kurdish security forces

A struggle between Sunni Arabs and Kurds has torn apart the city of Mosul and could play a crucial role in drawing the region’s boundaries.

MOSUL, IRAQ — Far from the volatile Shiite rivalries that have shaken Baghdad and Basra, this city has been devastated by an epic struggle for land and power between Sunni Arabs and Kurds that has shattered the social fabric and could very well shape the future boundaries of northern Iraq.

Kurds say that they have been driven out of the city by Sunni Arab militants and criminal gangs, who have set off car bombs and kidnapped and killed members of their ethnic group. In turn, Kurdish forces have been accused of carrying out assassinations in Mosul and torturing Arab detainees elsewhere in the campaign to annex territory to the semiautonomous Kurdistan region.

The Iraqi government and U.S. military spokesmen blame the chaos on Al Qaeda in Iraq, a loosely organized Sunni Arab insurgent group, which desires to create a new base in the north. But the problems date to 2003, when the Kurds first sent fighters into Mosul, and the status of the city’s Arab elite was diminished.

“Mosul became a real battlefield between Sunni Arab insurgents and peshmerga [Kurdish fighters] before Al Qaeda in Iraq really became much of a factor up there,” said Wayne White, head of the U.S. State Department’s Iraq intelligence team from 2003 to 2005.

“The Sunni Arab population up there knows the Kurds have designs on areas well beyond their current area of control in Nineveh [province], and are doubtless determined to push back,” he said.

The Kurds believe Mosul’s northern and eastern suburbs were wrongfully appropriated by Saddam Hussein’s Sunni Arab regime. They also contend that they are the rightful owners of the Sinjar region in the western part of the province. The sought-after territories are believed to contain oil reserves.

Since late 2004, Kurdish security forces have seized de facto control of the disputed lands. The Kurdistan regional government’s flag, a tricolor with a yellow starburst, flutters across northern Nineveh, and soldiers from neighboring Kurdistan are posted at dozens of sentry posts on roads.

Arabs rarely venture into northern Nineveh these days, even if they have Kurdish friends who fled Mosul, the provincial capital.

“It’s easier for Arabs to go to Syria and Jordan,” said Juneid Fakhr, a retired archaeologist.